Monogram Dinner by Design Presented by Caesarstone, returns to Toronto January 19-24. This fundraiser and exhibit is a six-day celebration of the crossover between food and design, where local and international designers have been tasked to curate a three-dimensional dining exhibit to showcase their style, taste and personality.

“Similar to a great recipe, Monogram Dinner by Design, has all the right ingredients. We have 11 of Canada’s most talented designers, five industry-leading sponsors, two fabulous award winning chefs, two worthy causes, and a dash of entertainment.” says Shauna Levy, president and CEO, Design Exchange. “There is no other event like it, and we are thrilled to be partnering with Monogram and Casey House again this year.”

Bill Osborne, Chef de Cuisine of America Restaurant and a second renowned chef soon to be announced will be at the helm of the kitchen this year; mixing up a dynamite multi-course dining experience for 150 VIP diners at Dinner by Design on January 20 2016.

“Casey House is grateful for the partnership with GE Monogram; as partnerships are a great opportunity to raise awareness about the needs we have in providing compassionate HIV/AIDS care in our city,” says Victoria van Hemert, interim CEO, Casey House. “The design community has supported Casey House since its inception, and continues to contribute generously as the requirements of people living with HIV/AIDS in our community have become more complex.”

Monogram Dinner by Design Presented by Caesarstone is also made possible due to the generosity of major sponsors Vitra, and Manulife, and Supporting Sponsor, Spafax. 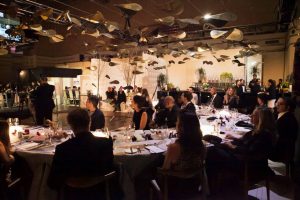 Humanscale wants you to leave your desk