Kicking off its sixth year, the Core77 Design Awards invites designers from all over the world to put their best work forward and participate in this annual celebration of design enterprise and intent. The program embraces a wide range of design practice: commercial, cultural, social and environmental. The result is a collection of projects that inspire a broader discussion about the current state and future of design.

Since its inception in 2011, the Core77 Design Awards program has welcomed nearly 10,000 entries from professionals and students in over 49 countries. More than 250 individual design firms have received honours, including IDEO, frog, Pentagram and fuseproject. Students from 149 universities and schools around the world submit hundreds of entries each year. Many projects honoured by the program have gone on to achieve far-reaching commercial success, such as the Nest Learning Thermostat and Yaktrax Run. All honoured projects are announced each year and promoted across the entire Core77, Inc., network, bringing them widespread recognition.

The Design Awards rely on the commitment and insight provided by an internationally distributed panel of Jury Teams to ensure a balanced and broadly informed judging process. Jury Captains for each category are invited by Core77 each year to independently assemble and lead their dedicated teams. They are tasked with building teams that will bring a wide spectrum of experience and perspective to the judging table, thus ensuring a unique point of view for each category. Once the teams review their category’s entries, deliberate and choose which projects to honour, they announce their decisions in a Jury Video that reveals a deeper look into their decision process. This level of transparency is rarely seen among award programs and provides a unique value to entrants seeking professional critique of their work.

The global design community has always been a primary stake holder in the mission and operations of Core77. The Community Choice Prize was introduced in 2015 to directly incorporate the voice of the design community into the program. Once the Design Awards honourees are announced, the public is invited to vote on their favorite projects from all categories. The votes are tallied and a Community Choice Prize winner is crowned in each category. The honoured project with the most public votes across all categories is named the Grand Prize winner and receives airfare and accommodations to attend the annual Core77 Conference in Los Angeles.

The 2016 Core77 Design Awards are currently open for entries. Regular entry prices end on March 8th and the Final Deadline to enter is April 6th. Judging takes place in May and the honourees will be announced in June. 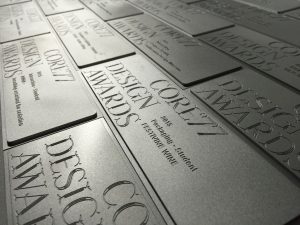