New to the furniture design world, Steel by Göhlin, a Swedish company based in Gnosjö, is debuting its first piece, appropriately named Chair No 1. “It is a fantastic feeling. It started as a kitchen remodel, but now Pontus and I have designed and produced a whole new furniture collection,” says founder Catrine Göhlin.

Architect Pontus Lomar and entrepreneur Catrine Göhlin met for the first time a few years ago through a mutual friend. Several months later, Catrine commissioned Pontus to renovate the kitchen of her villa in Gnosjö. The project quickly expanded and evolved into a collaboration which has now resulted in a new Småland furniture company. Catrine provides the ideas, and Pontus the designs. “Catrine wanted products that were not available on the market, so I suggested making them ourselves,” said Lomar.

Lomar, who founded Lomar Arkitekter AB over 20 years ago, has completed many new buildings and renovations, offices, restaurants and prominent residences, both in Sweden and abroad. Now he is a furniture designer, too. “I have heard about the collaborative and can-do spirit of Gnosjö for many years, but now I know what it means and what it can accomplish,” says Lomar.

Catrine grew up together with the family business in Smålandsstenar, a town in the Gnosjö region in the province of Småland in Sweden. Her father Erik began to manufacture stair railings in 1957, and steel was his material of choice. The firm grew quickly and soon became EAB, which is now a global company run by Catrine’s brothers Pelle and Svenne Andersson. “Our furniture items have steel as their main component, and everything is made in Småland; mainly by EAB, naturally,” says Catrine.

The work with the new furniture company went on in secret for about six months. The collection already consists of a dozen pieces – including tables, sideboards, chairs, and more. 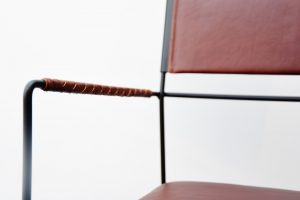 We Care celebration brings Toronto children a day of cheer

Ambiente: Under the Wire