Leading quartz manufacturer Caesarstone has announced a collaboration with world renowned Spanish designer Jaime Hayon for their 2017 Designer Program. The first instalment of this year-long collaboration will be unveiled in January 2017 at the Interior Design Show, Toronto, followed by a major event during Milan Design Week in April.

Titled “Stone Age Folk” Hayon will use Caesarstone as the essential component of his whimsical universe inspired by Fauna – the natural world – and folklore – the mythical world. Blending fantasy with functionality, playfulness with craft, and interactivity with cultural references, Hayon will create a kaleidoscopic and harmonic installation. Visitors will recognize his signature smiling characters popping up throughout the space, alongside joyful carousels, wall panels, lights and tables.

“I wanted to go beyond the expected, from my viewpoint as an artist and designer. With this in mind, I created my own imaginative cosmos, using Caesarstone’s quartz alongside other noble materials such as glass and metal,” said Jaime Hayon.

“Entranced by Hayon’s fantastical world and ability to combine different elements and Caesarstone colours in such a unique, effortless, and elegant way, we were inspired to work with him on this collaboration that further demonstrates the beauty and strength of Caesarstone, while presenting Jaime’s visionary interpretation,” said Elizabeth Margles , VP of Marketing at Caesarstone. 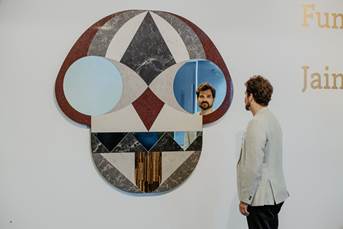