It’s long been known that scent has a profound effect on emotion, behaviour and memory. Your scent detection system is located in the limbic brain, the oldest part in evolutionary terms, and was key for early man in detecting both food and danger. We may not need to sniff out dinner or a nearby tiger anymore, but that primitive, visceral detection system is still active.

Nowadays, architects, developers and designers are discovering the value of scent as part of a comprehensive design experience. While sight, sound, and touch are all intrinsic to our experience of a space, smell has the added advantage of being largely subliminal – since it’s so closely linked with that primitive food-or-tiger instinct, after all.

Tracy Pepe, a scent designer and self-styled “olfactory design guru,” has built a specialty on helping architects and designers with the often surprisingly exacting process of developing and installing custom scents in their spaces. A parfumier by training, she began her career in the aesthetics industry, but became fascinated by the underlying chemistry of scents, and their psychological and emotional effects. 27 years ago, she opened a company that specialized in developing custom scents for companies.

Then she was approached by architect Peter Heyes, who had read about the use of scents in the building industry in Japan and wanted to try it in Canada. Knowing the concept was virtually unknown here, she sensed an opportunity. At the same time, her son was born with significant health problems, and she had been looking to downsize her role in her growing company, in order to spend more time with him. She launched Nose Knows Design in 2007, and became the first scent designer in Canada to specialize purely in architecture and interior design installations.

One of her product’s early adopters was Julian Battiston, the developer behind the Oben Flats rental properties in several trendy Toronto neighbourhoods. He came across Pepe through Bellosound, the sound company that consulted on music selections for Oben Flats’ lobbies, which had partnered with her at IIDEX. “At Oben Flats we treat design very seriously. So we looked at the design, the music, the lobby, then came across the idea of using scent to add to the entire sensory experience.” The idea of a signature scent experience sets the building apart in a way that most people might not consciously be able to name.

The scent that Pepe designed wafts through the lobby of Oben Flats’ Leslieville building and gives a fresh, low-key impression, with subtle notes of lime and lavender. The scent is geared to appeal to the design-conscious clientele the building aims to attract, but imparts a sense of home and safety as well. Candles infused with the scent are given to tenants when they move in, and according to Battiston, are highly popular with tenants, who frequently reorder them. 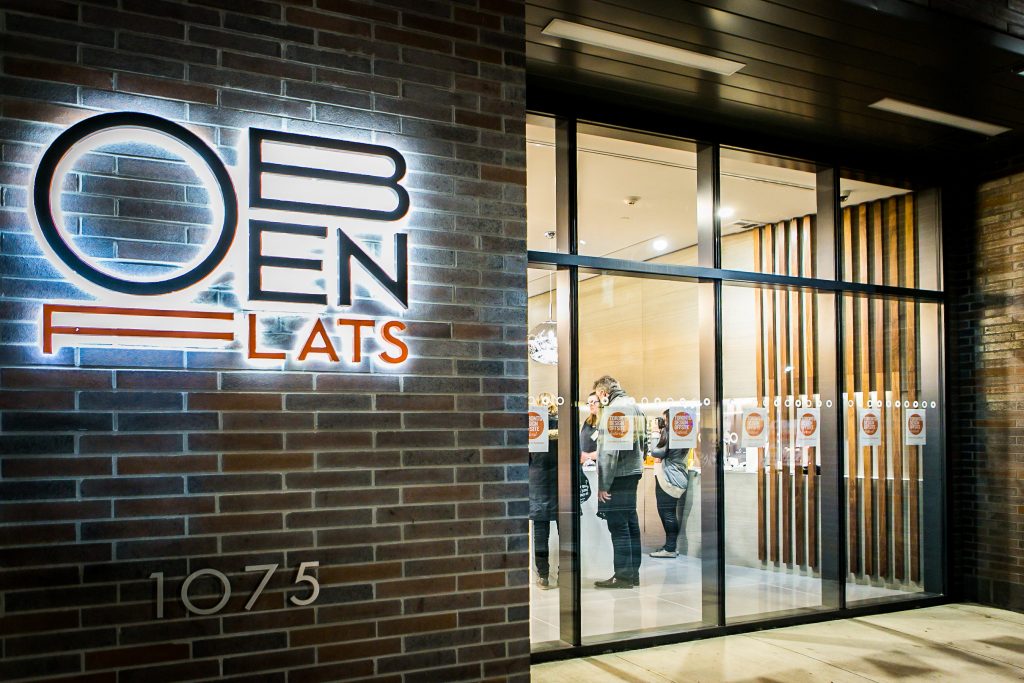 However, designing space-focused fragrances is about much more than just a pretty smell, says Pepe. The full process requires a deep understanding not just of chemistry and other technicalities, but also of different HVAC systems and the physical layout of a space. In short, formulating a scent for a particular client is as complicated as any other aspect of creating the interior design. “It’s both an art and a science. The scent creation process itself is very methodical; once you understand the basic principles of particular scents, it’s simple and teachable.”

This focus on preliminary preparation and research is what takes much of the six months to a year that it can take to arrive at a finished result. Add in ancillary products like candles or room sprays, and the process can take even longer; scent behaves differently depending on the medium it’s in, such as vegan wax or an atomizer, requiring additional fine-tuning.

One wonders if diffusing a scent through a public space is always desirable, since many people are sensitive to perfumes, especially in the closed atmosphere of a lobby or a condo hallway. It’s a question she hears frequently, and she has a ready answer. “What a lot of people are sensitive to is not the scent itself, but the other ingredients in a lot of commercial perfumes, especially alcohol, or simply poor-quality base ingredients. We use the highest quality ingredients available, sourced from all over the world, and we never use alcohol or solvents.”

(As a former parfumier in the cosmetics industry, Pepe can’t help confiding that, with a typical “designer” perfume costing a hundred dollars, there’s actually about two dollars’ worth of product. The rest goes into advertising, packaging, and whatever you’re willing to pay for the name. It’s no wonder some people develop a sensitivity.)

Ideally, she says, she likes to be brought in at the earliest stages of a design, even at the blueprint or preliminary rendering stage. “A lot of what I do is affected by the nature of the HVAC and electrical systems; there have been cases where they’ve shown me a blueprint of an interior, and I’ve suggested ways they can alter it, not only to make it more efficient from a scent-diffusion perspective, but often saving the client money and time as well.” Also, different systems produce different results, which will influence her formulations as well.

Early on, she interviews clients at length about their overall ideas for a project, in order to get a sense of the atmosphere, end users, and physical properties of the space. She also obtains full specs of the building, its type and age, and other specifics. Depending on location, that may also include such variables as atmospheric humidity and temperature; while it’s not as critical in a temperature-controlled environment like most Canadian buildings, in a hot and humid place like Florida it’s a central factor.

Once all these variables are discerned, the work of formulating a scent begins. Armed with client-furnished adjectives such as “clean, “young,” “fresh,” “calming,” or the like, she will start to combine essential oils and other ingredients in order to come up with preliminary samples. Once a scent formula is refined and then finalized, it is sent off for tests to ensure it meets regulatory requirements, which vary from country to country. Canadian standards, which are similar to Europe’s, are some of the highest in the world.

Some clients prefer a less time-consuming (and costly) process; for these, Pepe has formulated a series of eight “accords” with names that roughly correspond to colours, and which have reliable associations, which she blends or modifies to arrive at a particular, unique formula for each client. Grey has a clean, ozone-based scent, like rain clouds; Blue is calm and watery, evoking trust and safety. One of the advantages to the accords is that they have already been pre-tested and meet the toughest worldwide standards; recently she began marketing them on their own, as Whiffloves, a series of candles and room sprays.

Once the scent is ready for deployment in the space, her company supervises integrating special scent-diffusion units into the building’s HVAC system. A typical unit is about the size of a shoebox, with a tube that injects the scent into the ventilation apparatus. Bottles of liquid scent are easy to replace by building maintenance personnel, and last in the neighbourhood of three to six months.

“In architecture and design, of course everyone focuses on colour, material, and look, but almost never on the scent of a space,” Pepe says. “And yet this has just as profound an effect on your reaction to a designed space as any other element.” 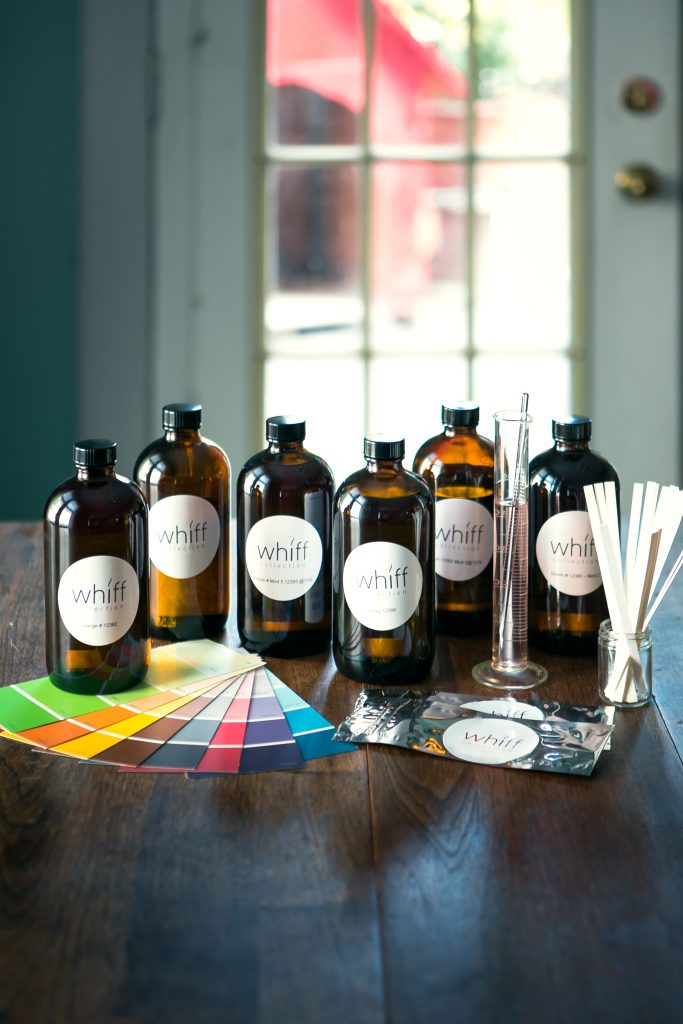 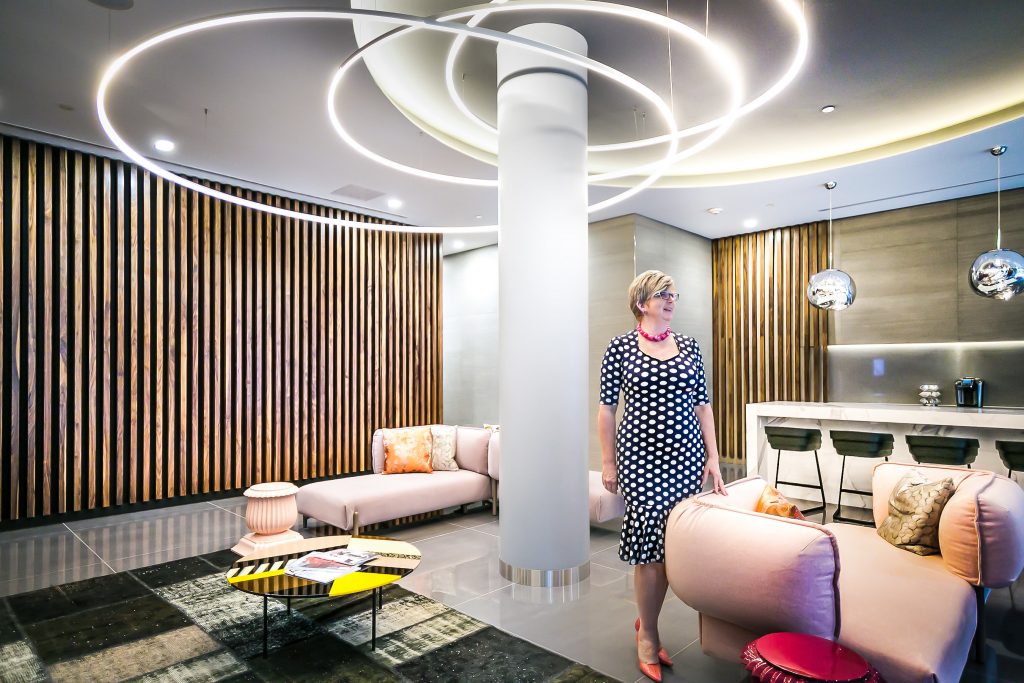 Deviating From The Norm