In response to the rise of e-commerce, Samsung enlisted Quadrangle to create a new kind of flagship store where one can make purchases but, primarily, the point is not shopping at all. Rather, the goal for the Samsung Experience Store at CF Toronto Eaton Centre was to establish an environment that offers a touch point for the brand – a place to experience its latest products, to receive personalized advice and instruction, and to partake in a full calendar of social experiences including design workshops and on-site cooking demonstrations. 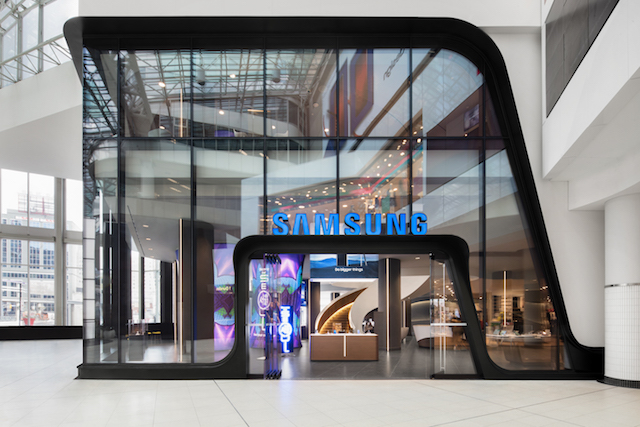 When Samsung decided on a two-storey, 21,000 sf shell at the main entrance to Toronto’s Eaton Centre opposite Yonge-Dundas Square – a landmark open urban space at one of the busiest intersections in Canada – it became apparent that the conventional, big box façade had to be reconsidered to give the storefront a dynamic urban presence and bolster the brand’s identity within the city. 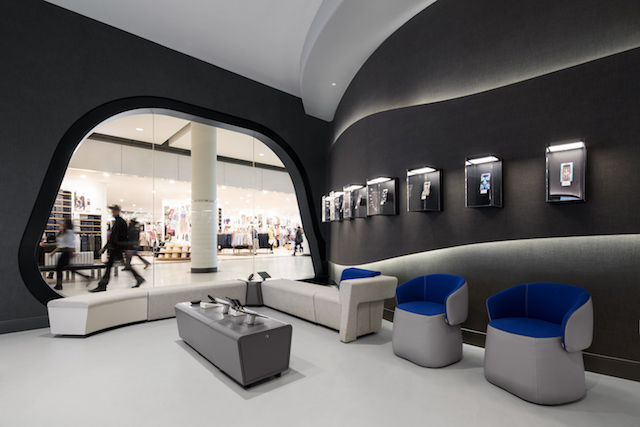 The brand is based on a system in which each product ‘talks’ to the others, enabling users to link their technological world from refrigerators, to tablets, televisions, and so on. This inspired the design team to create an environment in which everything flows harmoniously, using the word infinity to anchor the vision.

Armed with these challenges and inspirations, Quadrangle eroded the blank façade, creating large glazed areas, so that now three quarters of the store is on display to the city. This means that the store looks strong from every angle, providing passers-by with views deep into the space, and shoppers with a constant reminder of urban life.

Externally, Yonge-Dundas Square is very bright with a plethora of electronic signage competing for attention. In contrast, the store attracts the eye because it is so out of character with its surroundings. A metal ribbon motif flows over the exterior and through the entrance canopy, inviting visitors inside. On the interior, softly lit swirls sweep across walls and ceilings, encircling a grand curvilinear staircase, a sculptural element that ushers guests to explore the second level.

The designers used colour and contrast to define the merchandising strategy. Monochromatic grey tones in matte finishes create a muted background to the glowing technologies. 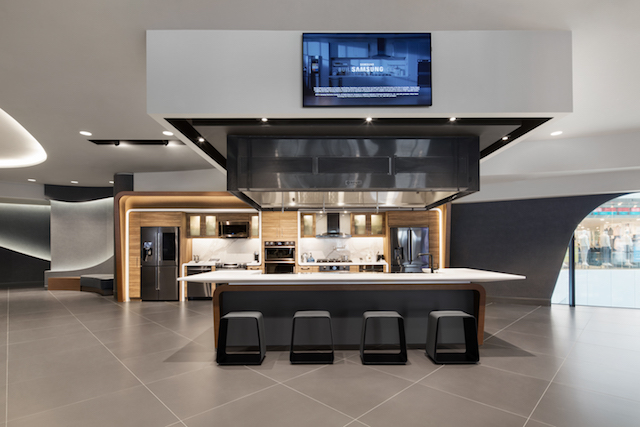 Visitors are instinctively drawn to the tables, counters and displays where they can interact with products or agents by both their targeted lighting and white Corian surfaces, while realistic kitchen and living room zones allow staff as well as special guests to demonstrate how the products integrate with one another. 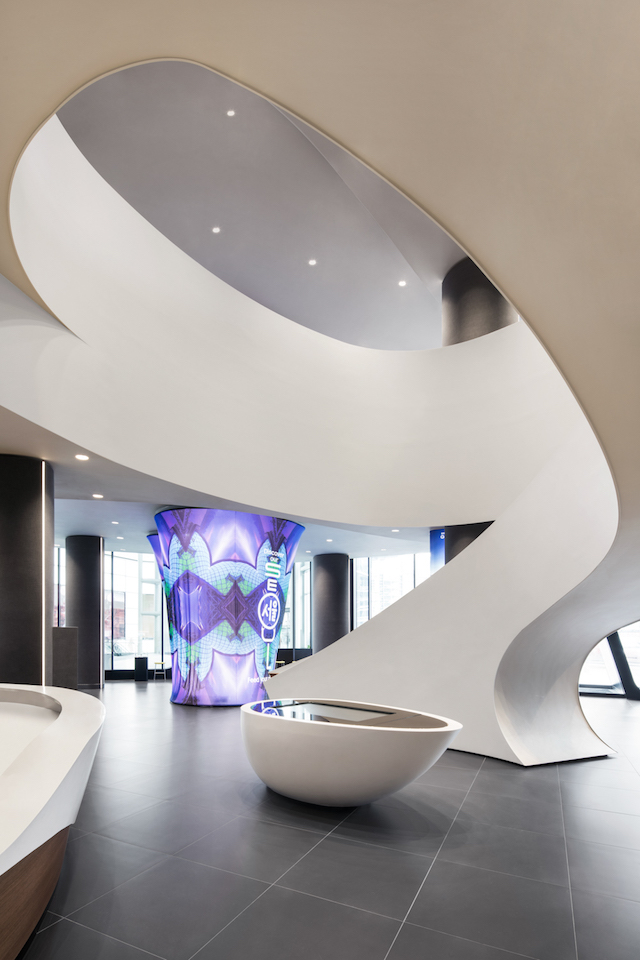 The second floor doubles as an event space so all furnishings are flexible and easily movable. Celebrity chef demonstrations, photography and videography tutorials, and digital design workshops are just a few examples from the already popular schedule of events that have occurred since the location’s opening in January 2018. 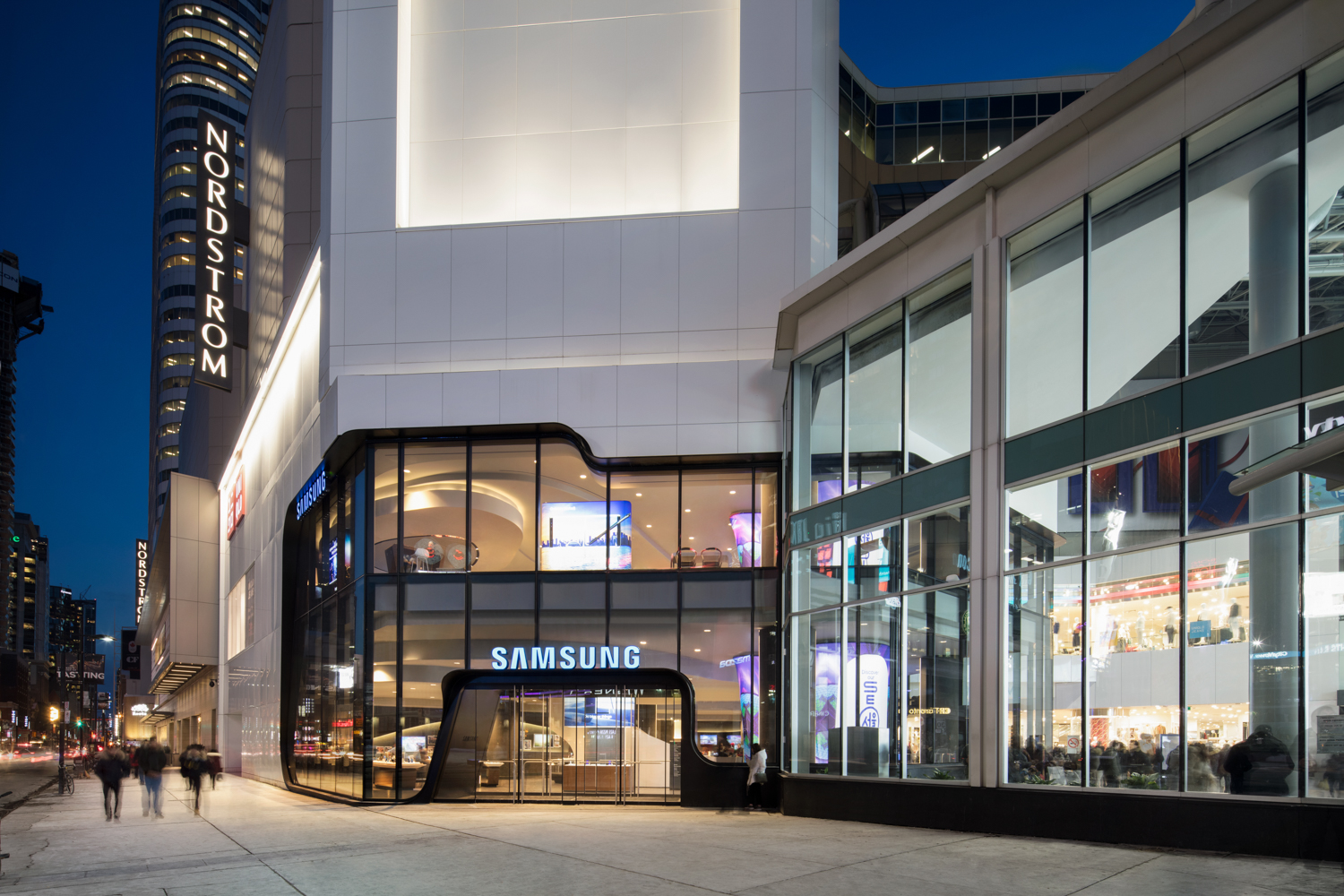 George Brown College hosts a regular cooking class series and Hot Docs premiered three documentaries here with intimate Q&As with the filmmakers, demonstrating how this space is contributing to both the greater social fabric of the city and a new brick-and-mortar retail concept.