Passages Insolites is best experienced by charting your own course through the historic district’s winding streets. By day or night, experience how thought-provoking art transforms its surroundings, adding a touch of whimsy and sparking poetic, socially engaged dialogue. The walking circuit offers a singular, inclusive and accessible experience and an unusually intimate glimpse of the work of some of Canada’s leading artists and architecture collectives.

Passages Insolites is Quebec’s biggest public art event. Created by EXMURO with the support of the City of Quebec, the event is in its fifth year and has become an annual tradition of local’s cultural scene. Make your stay unforgettable with this magical walk through the heart of Quebec City.

LEGAGA (Quebec) — The Pillars of Post-Postmodernism 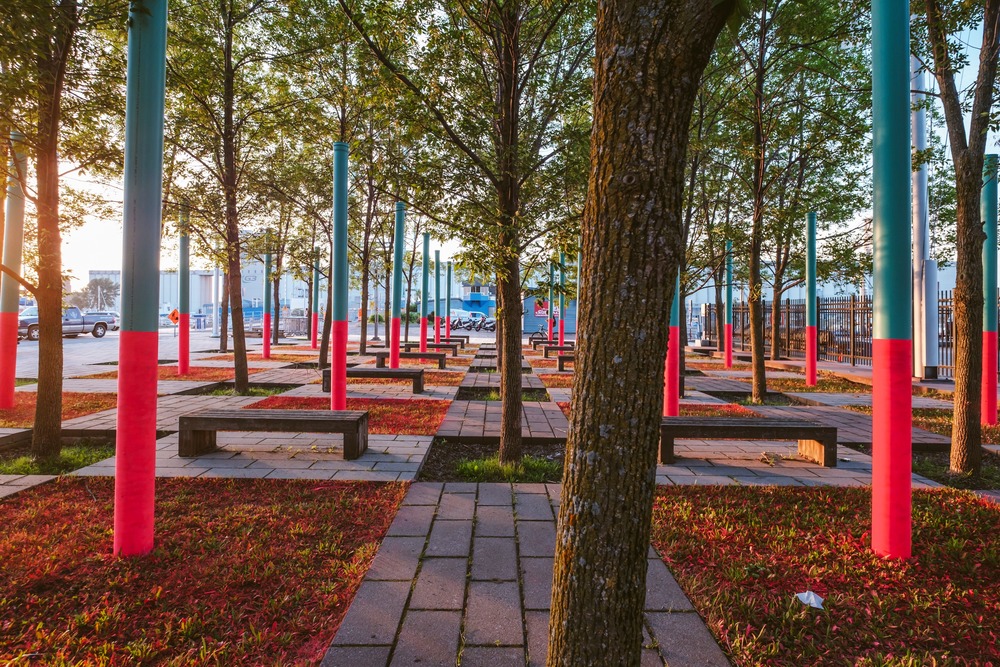 What is the difference between sewer pipes, sculptures, and gardens? In a post-postmodern society, there isn’t any. Don’t be fooled by its colourful, playful appearance—this installation asks serious questions: What makes beauty beautiful, and ugliness ugly? How can we use ugliness to make beauty? The Pillars of Post-Postmodernism confront these ideas and invites you to imagine a completely different kind of city, one where engineers make art, architects are in charge of engineering, and architecture is left to the artists. LEGAGA’s installation is the winner of the 2018 Passages Insolites competition, which was held in conjunction with the Université Laval architecture students’ association. 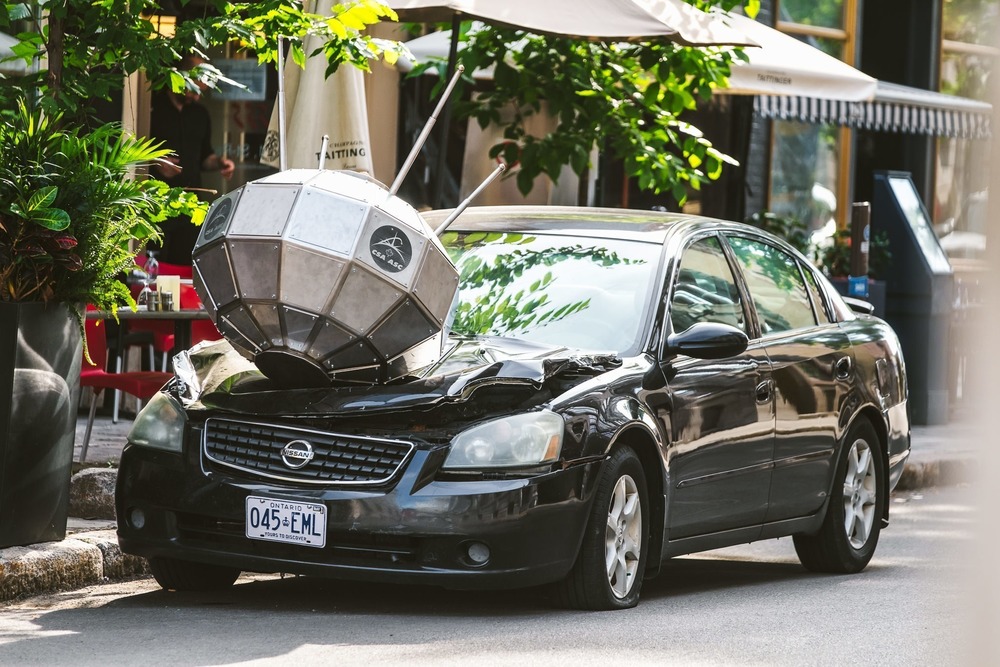 Alouette consists of a replica of the 1962 Canadian satellite Alouette-1, installed as if it has crash landed into a parked sedan. The Alouette project is a metaphor for the unfulfilled promise of a future of scientific advancement once heralded by modernism. The sleek futuristic design of the crashed satellite, resting lifelessly on the crushed car, evokes a modern-day Icarus whose blind faith in technology led to his swift demise, sending him falling back to earth. 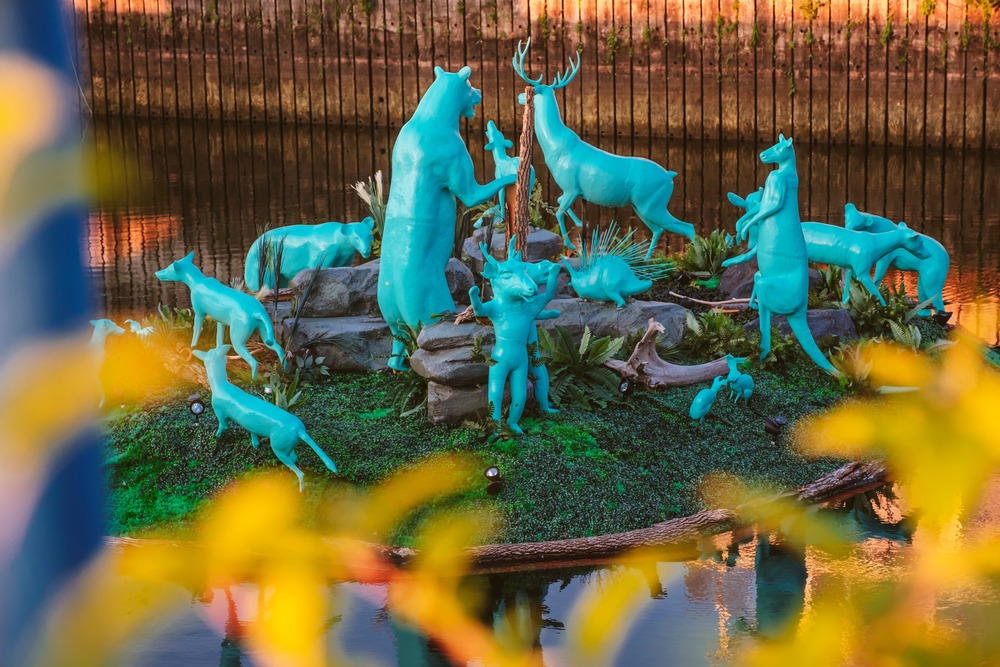 In the Bassin Louise section of Quebec City’s port lies a mysterious floating island inhabited by a diverse, surreal cast of plants and animals—a fantastic oasis that appears to have broken off from a distant land mass and drifted to our shores along with its outlandish ecosystem. Day and night, The Happy Castaways stand on their island, inviting us to join them in a shared dream of a world more harmonious and peaceful than this one.

Collectif 5 (Blainville, Montréal, Québec, Sherbrooke) — In the Guts of the Future 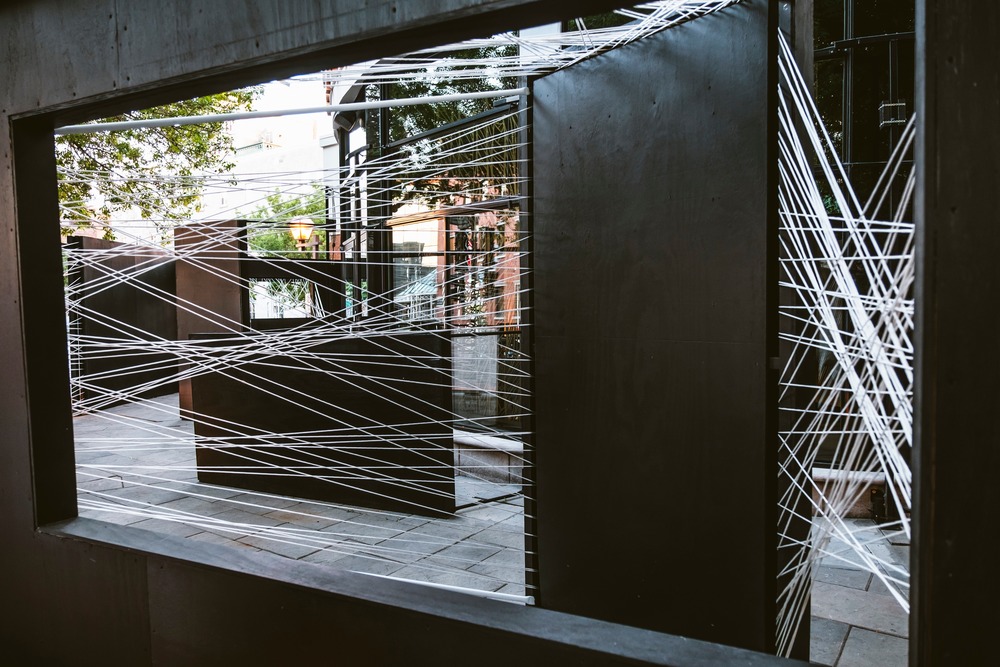 Large flat slabs of wall form the frame of this singular space, which spectators experience by walking through it. Openings in the modules are created with filaments reminiscent of muscles contracted almost to the breaking point. In the Guts of the Future metaphorically represents possible paths forward into a future fraught with uncertainty and tension. 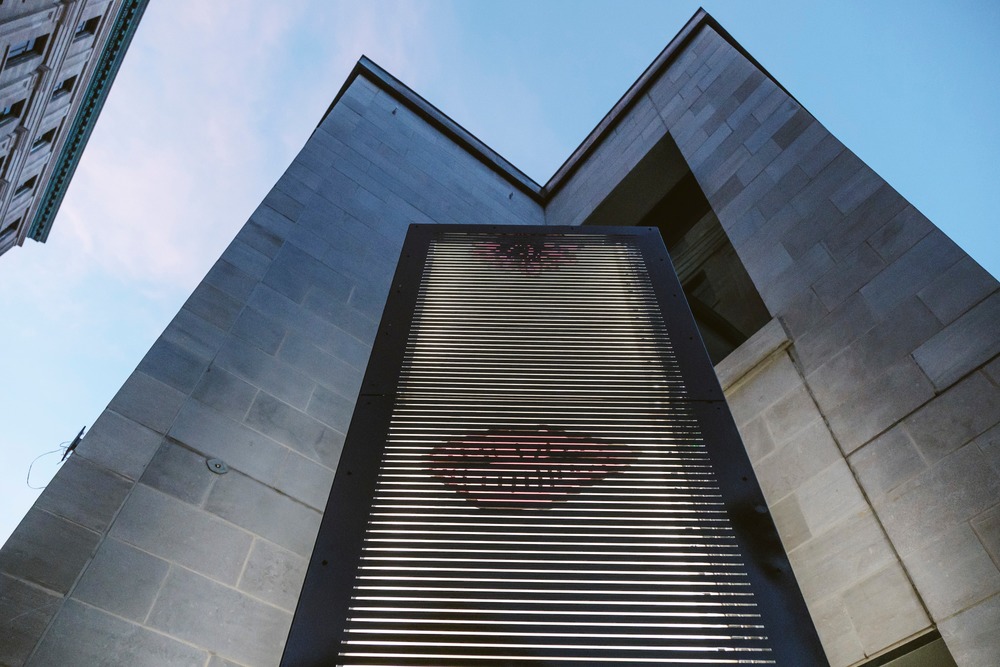 Elsewhere is an optical and sonic illusion celebrating “Ombro-Cinéma”, an early animation technique that uses simple screens to create an impression of movement. A collage of images is mechanically animated by the spectator’s movements to reveal a sort of visual haiku. 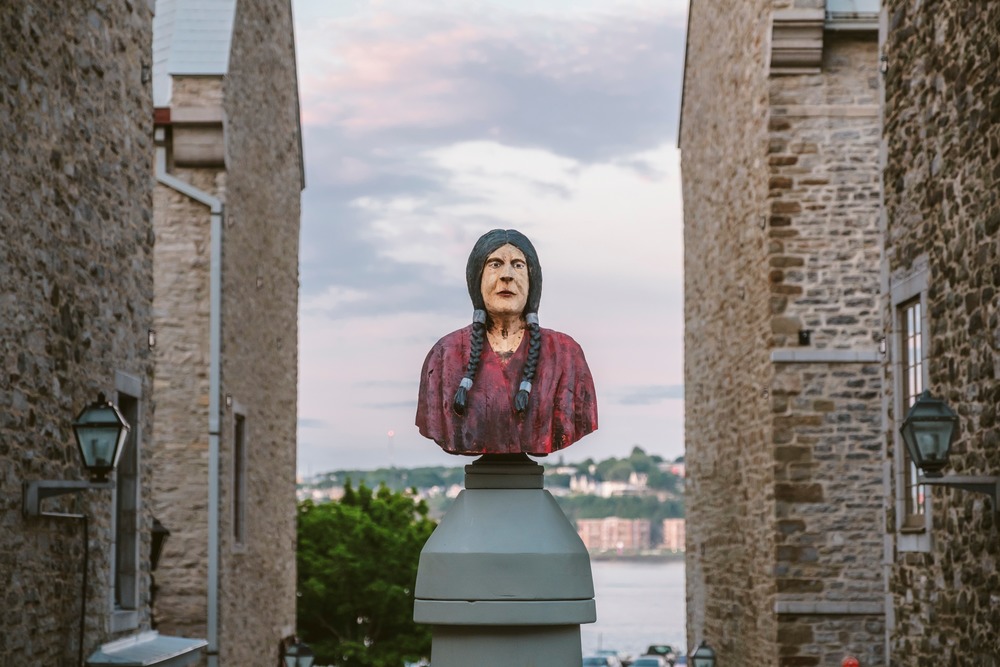 A Monument for Mary Ann pays tribute to an Indigenous slave (“Panise woman” in the parlance of the time), who escaped the custody of her owner, a wealthy Place Royale innkeeper. By taking up a position opposite the bust of Louis XIV, the work honours women’s age-old fight for equality, respect, and dignity. 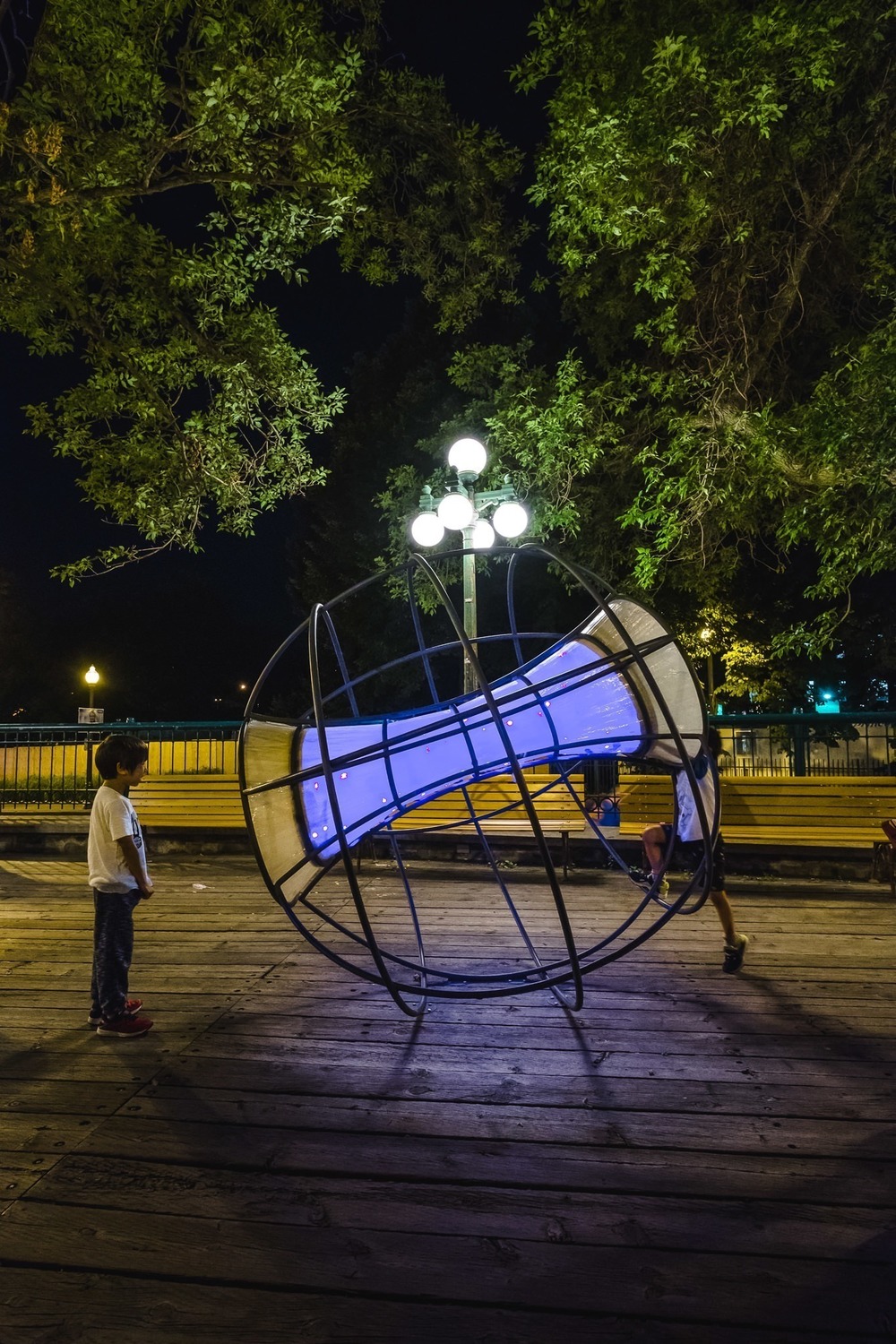 This sculpture/video installation traces the outline vector of a black hole in the universe. The work defies space-time, transmitting information to and from a single place, but at another time. Through the power of time travel, In Time affords a unique glimpse into two important little-known chapters of Quebec City history: the disturbing practice of crimping (tricking or entrapping men into enlisting on ships) in the Petit-Champlain neighbourhood throughout the 19th century, and the deadly Quebec Rockslide of 1889. 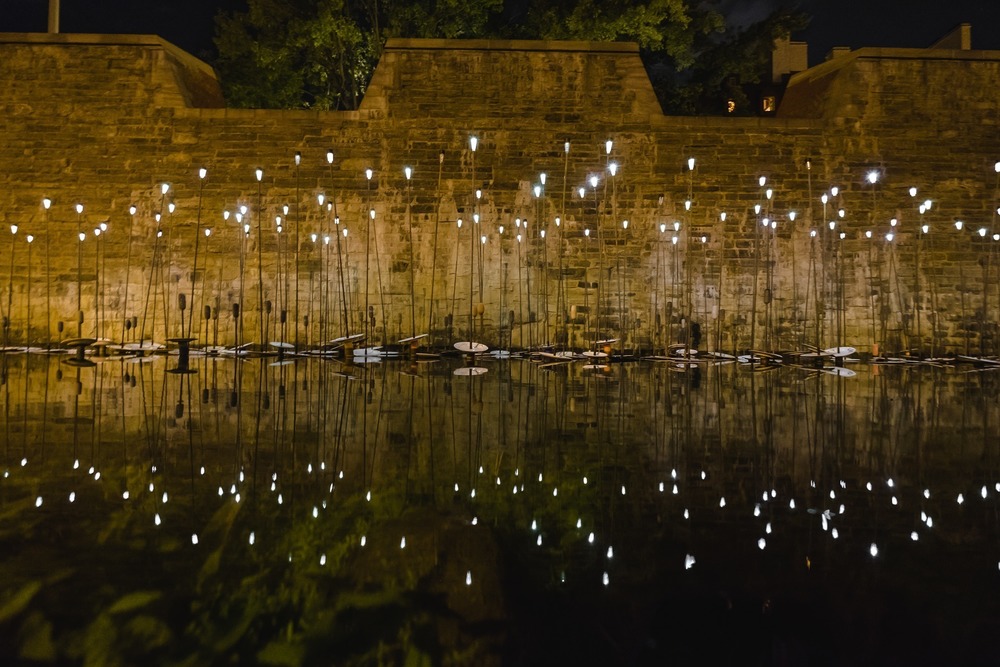 As though straight from an impressionist painting, the water lilies (or water flowers) rise and fall to the rhythm of the tides, like leisurely breathing. This soothing, artificial flora lights up in the evening, evoking whispered tales of land and sea.