Styles of the Tiles

At the press welcome party, Joe Simpson, editor of Britain’s Tile & Stone Journal and three others, and blogger at Diary of a Tile Addict (does he ever sleep?), observed, “There’s always a slight difference with the American show because many European tile producers essentially bleach it. They leave most of their coloured tiles at home and come with a very neutral palette. It becomes a self-fulfilling prophecy. They think it’s a white, taupe, bone market because that’s what they show.”

Look over your shoulder, Caesarstone, Cambria and Silestone. Spain’s Tau, the world’s eighth-largest tile producer, introduced a 12mm-thick, 10½ by 5¼-feet tile as part of its new Ascale collection for countertops and worktops or indeed any vertical or horizontal wall surface. At that size, Tau is already giving quartz solid-surfacing material a run for the money. But, Tau also one-ups them. The booth installation showcased Tau’s agreement with TPB Tech that puts the electromagnetic apparatus under the slab to transform the top into an induction-cooking surface, thereby eliminating the typical disruptive glass-ceramic hob. Now, the cooking and prep area are indistinguishable. Quartz materials contain a resin binder that expands and contracts when heated or cooled, making them unsuitable as a cooking surface. These limitations don’t apply to a porcelain ceramic such as Ascale. www.ascale.es 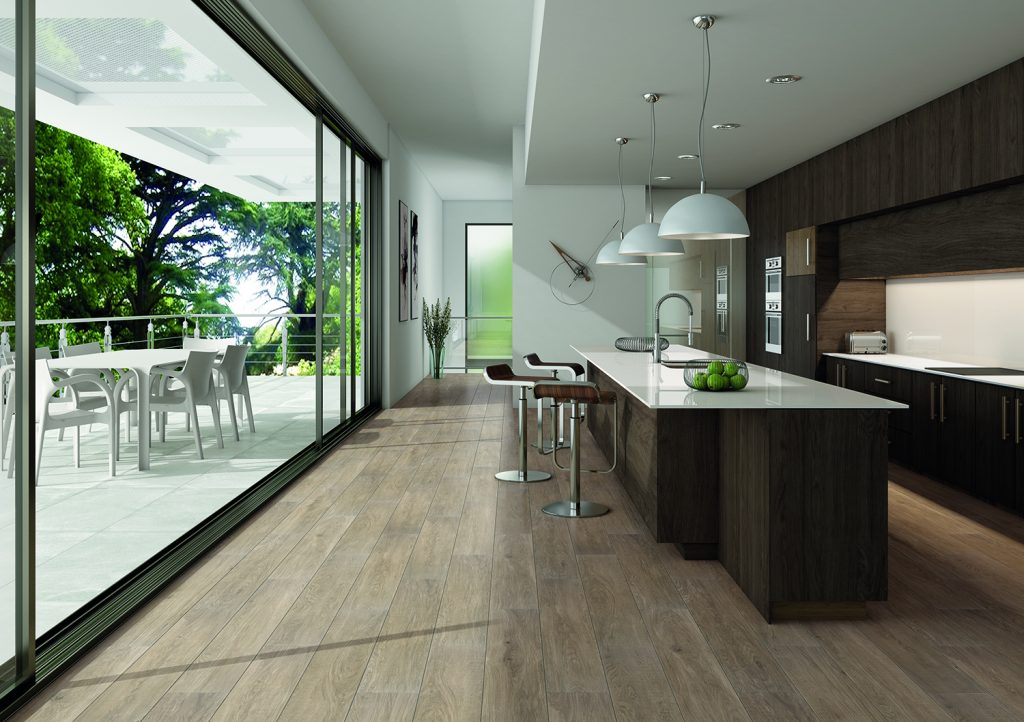 Subway tiles trace their lineage back to the 3 by 6-inch white ceramic tiles with glossy glazed finish and thin grout lines used as surface treatment in New York City subway stations since the turn of the last century. At the booth of Spain-based Colorker Group, its ZYX brand featured the Metropolitain [sic] collection of tiles inspired by the world’s great subways or metros, including our own “world class” Toronto Transit Commission. Along with tiles paying tribute to the underground railways of London, Taiwan, Stockholm, New York and Paris is Museum (the TTC’s Royal Ontario Museum stop). ZYX’s brochure explains that the inspiration was “this architectural gem of the Canadian city,” with its “tribute to ancient Egyptian deities, Toltec warriors and reproductions of the Doric columns of the Parthenon or the Forbidden City.” Museum is available as a white veiny marble surface framed by a white bevel or vice versa, measuring four by eight inches. www.colorker.com 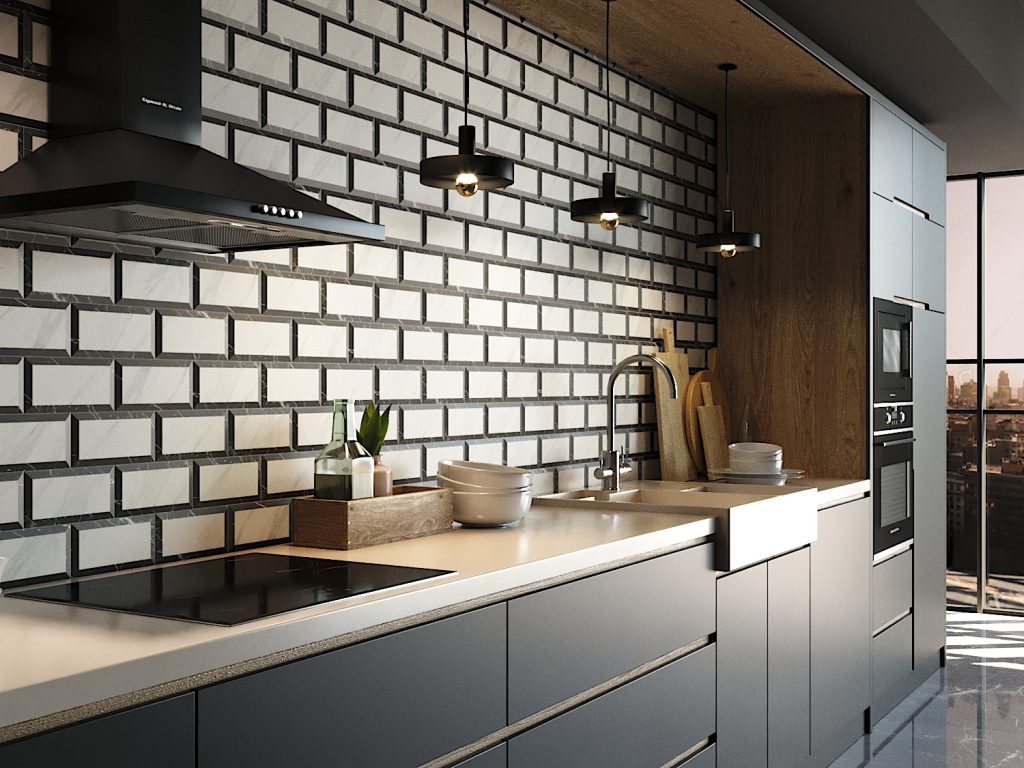 Vancouver-based Bellavita introduced Parkway, which Ryan Fasan, Bellavita’s creative development director, explained, is “100 percent unglazed and as raw as it can get.” The inspiration was “to showcase the beauty of a raw and unadorned clay in a modern reboot.” The hybrid firing process “marries ancient and modern technology.” To give a handmade, craftsman feel to the collection, the biscuit (the white, unglazed tile) is extruded in a 2½ x 9½-inch nominal format that provides “controlled irregularity” in the body of the tile. The process bestows “unparalleled spontaneity in wonderfully neutral but nuanced tone.” www.bellavitatile.com 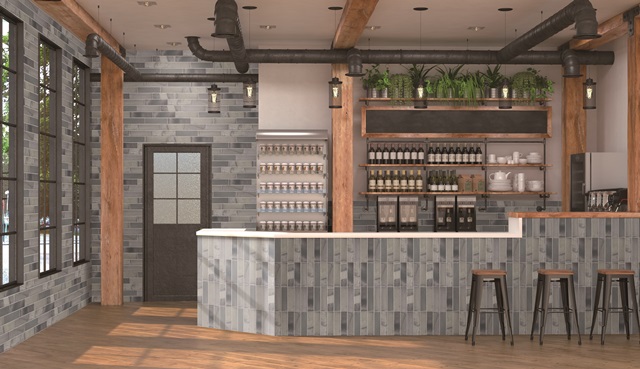 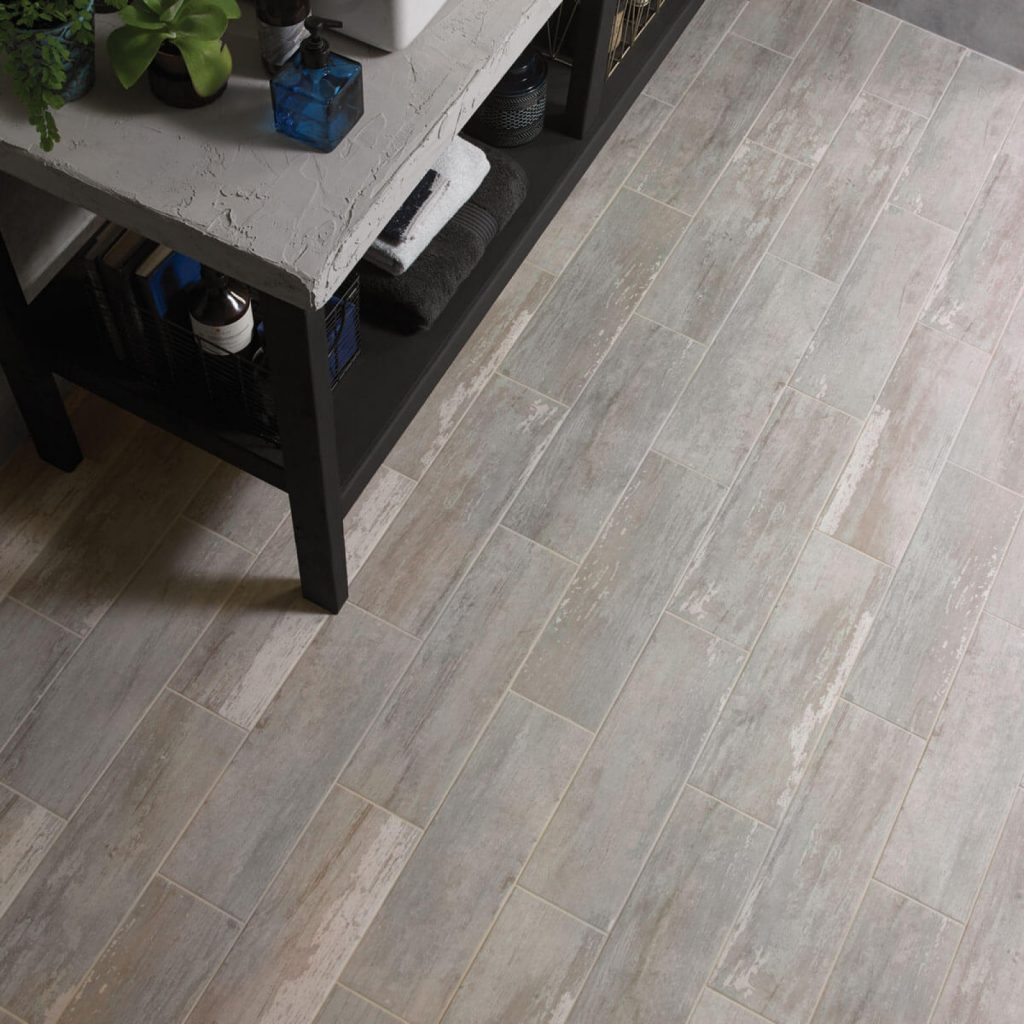 At the booth of Brooklyn, New York-based Allison Eden Studios, company founder Allison Goldenstein was swathed in a sheath dress made of a newly launched fabric version of her colorfully striped Funky Rainbow Sticks, which in turn typifies her work in small-format, highly decorated stained-glass glass mosaic tile. Her work, straddling the boundary between art and craft, graces many high-end hospitality installations, from the Wynn Hotel in Las Vegas to Ritz-Carlton and Mandarin Oriental Hotels. Branching out into a textile line is nothing new for the graduate of New York’s Fashion Institute of Technology; she previously designed a women’s-wear line for Nautica. www.allisoneden.com 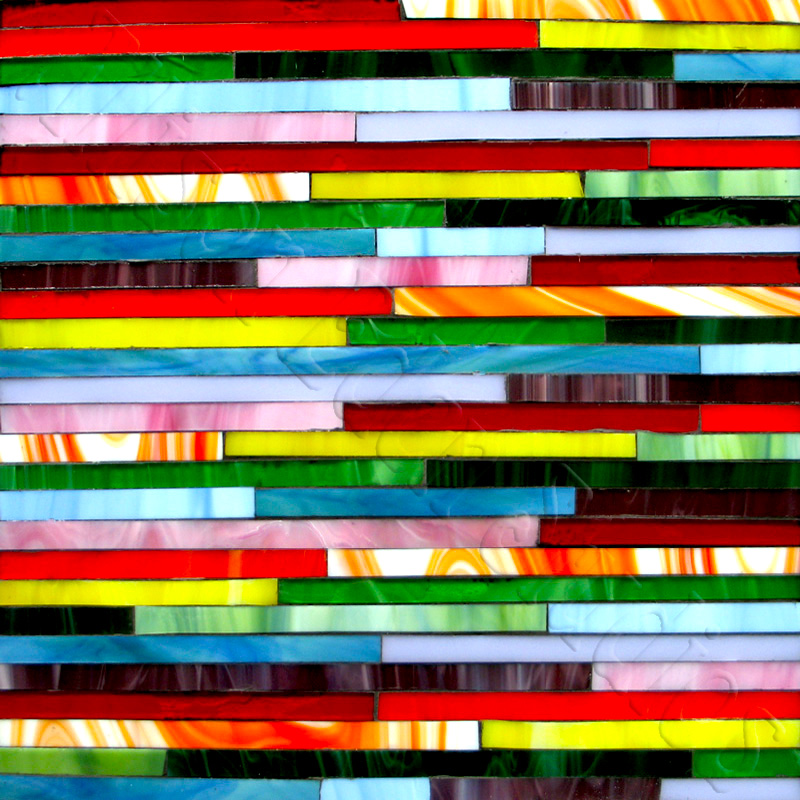 While other suppliers exploit the latest advances in digital printing to mimic the look and feel of real wood, the Spanish firm Fanal’s Fusta series emulates the mottled man-made grain (like the edge of plywood, but thicker) of pressed woodchips as they appear in engineered wood products such as particle board and parallel-strand lumber. Engineered wood is a humble, utilitarian product fit only to be hidden away behind genuine wood veneer, in the case of particle board drawer fronts, or in trusses and other structural underpinnings, in the case of parallel-strand lumber. Now engineered wood has come out of the closet, so to speak, in the guise of an 18 by 46½-inch polished glazed porcelain tile that brings a paradoxically raw yet upmarket look to walls and floors.  www.fanal.com 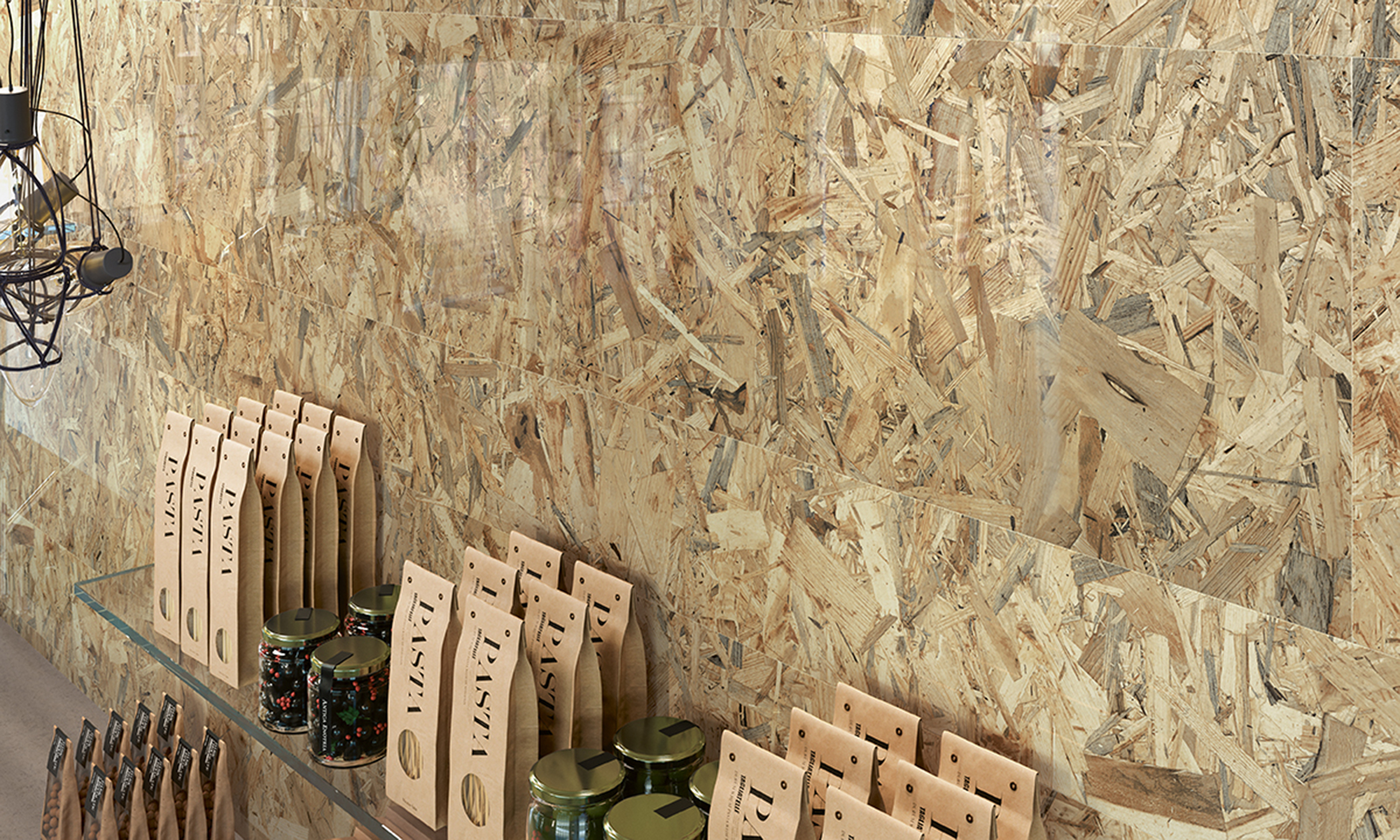 Residential designers often strive to bring the outside inside, to make the interior and exterior feel like a continuous space. Now it’s possible to use the same tile design on terraces, pool surrounds and indoor floors and walls, as in this example showcasing Tennessee-based Landmark Ceramics’s Infinity collection. Outdoor tiles typically differ from their indoor counterparts by being frost-heave and slip-resistant, and by being thicker (20mm, versus 10mm for floor and 7mm for wall tiles) to withstand heavy traffic. Indeed, in northern climes outdoor tiles make more sense as a construction material for driveways than asphalt or concrete, which often require patching after spring thaw. By their nature, tiles can float and settle independently. Regardless of climate, porcelain tiles, being impervious to stains, are ideal for a parking pad or car dealership because oil and grease stains are but a hosing-down or steam-cleaning away. www.landmarkceramics.com 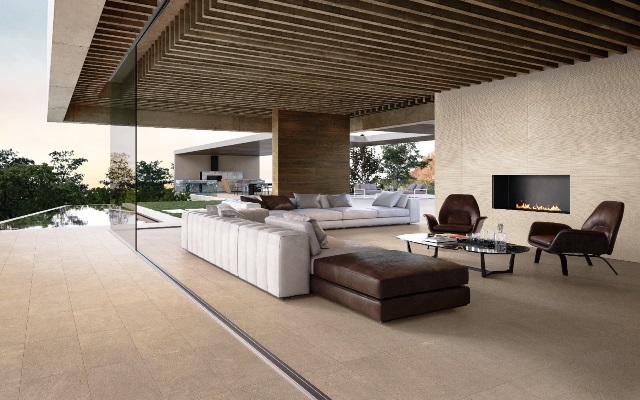 M.C. Escher lives! The trompe l’oeil representation of three-dimensional space on a two-dimensional surface has always been a popular theme in marble intarsia and wood parquetry and it endures in ceramic tile patterns that bestow an old European castle look. The 8 by 8-inch rhomboids in dusty desaturated hues in the Chalk porcelain stoneware series from Italy’s Marca Corona 1741 dance with a subtle inner life as we perceive them in rapid succession as being flat, then as having depth. www.marcacorona.it 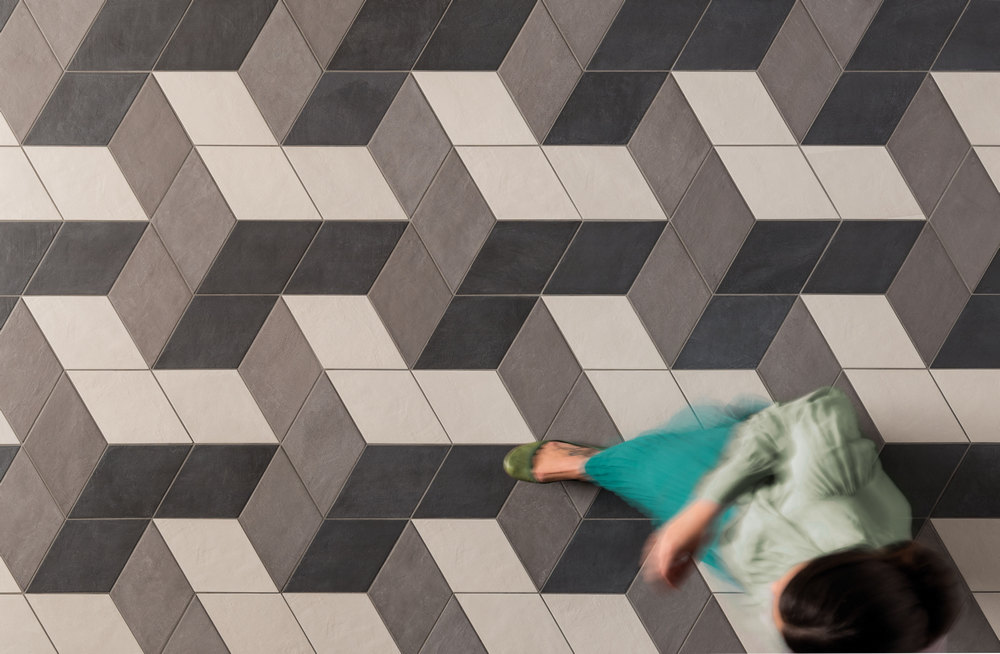 If a show devoted to ceramic tile is eye candy, then Adex USA’s translucent crackle glazes, distinguished by their fine spiderweb of lines, are the glace mints. The most traditional-looking of the crackle variants, the Earth series, has rustic edges, which is industry parlance for slightly irregular edges, which give an old-fashioned, handmade look. www.adexusa.com 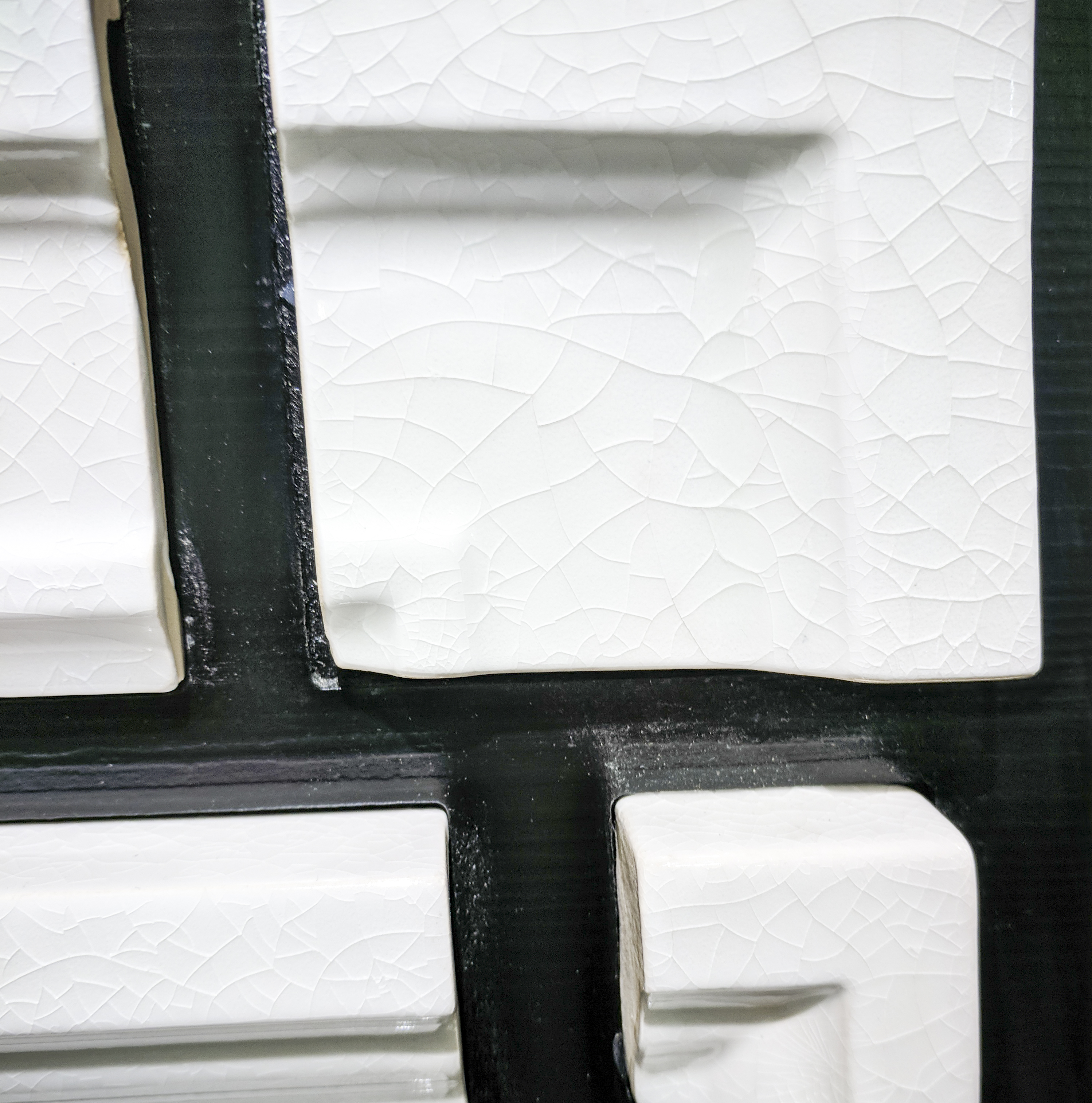 Concrete-effect tiles have been hot for years. “But at Coverings, [Italy’s] Lea Ceramiche presented what has to be the most effective, carefully considered and fully realized concrete portfolio to date,” says Tile & Stone Journal editor Joe Simpson. “In this achingly beautiful collection” titled Slimtech Concreto, designer Fabio Novembre’s inspiration was the way water reacts with the dry cement, expressed as the contrast of shiny and matte surface sectors “in which,” Novembre says, “the tone-on-tone decorations are never too loud.” The 6mm laminated porcelain stoneware is available in formats as large as 4 by 8½ feet. www.ceramichelea.it 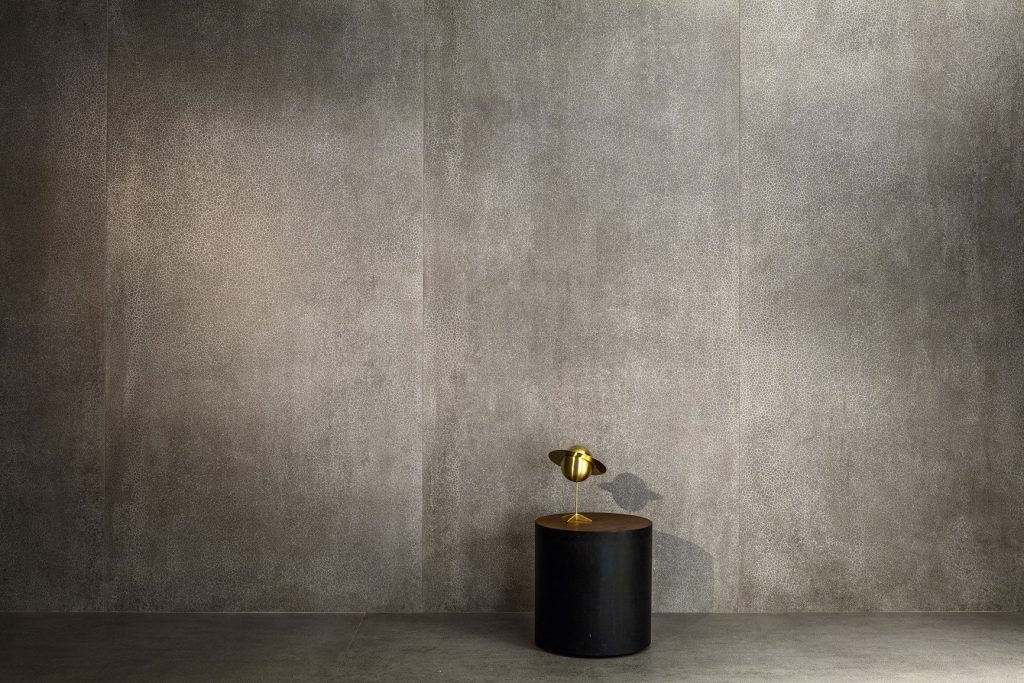