In a new video, architect and design Thomas Heatherwick takes us inside the design process for the instantly recognizable Magis Spun chair, designed in 2010. It’s been used in indoor and outdoor public spaces, office projects, and more and has been described as terrifying, exhilarating, and playful – all at the same time.

A transcript of the video follows below:

You feel your back stretching, your legs up, you get a different perspective on the world and then come back ‘round. Normally somebody gets terrified of going all the way around and then realizing that they can – there’s a sot of art to doing it.

There was no intention to design a chair. We have all sorts of experiments and tests we’ve tried, many of which go absolutely nowhere, but the occasional times where things really come together, that moment is exhilarating.

With this project there was an idea, a proposition: was there a geometry you could make that was rotationally symmetrical, that you could sit on and be comfortable in? Because if you could you would be breaking down the typical seat, back, arm, front legs, back legs, which are all the ingredients you’re used to seeing. 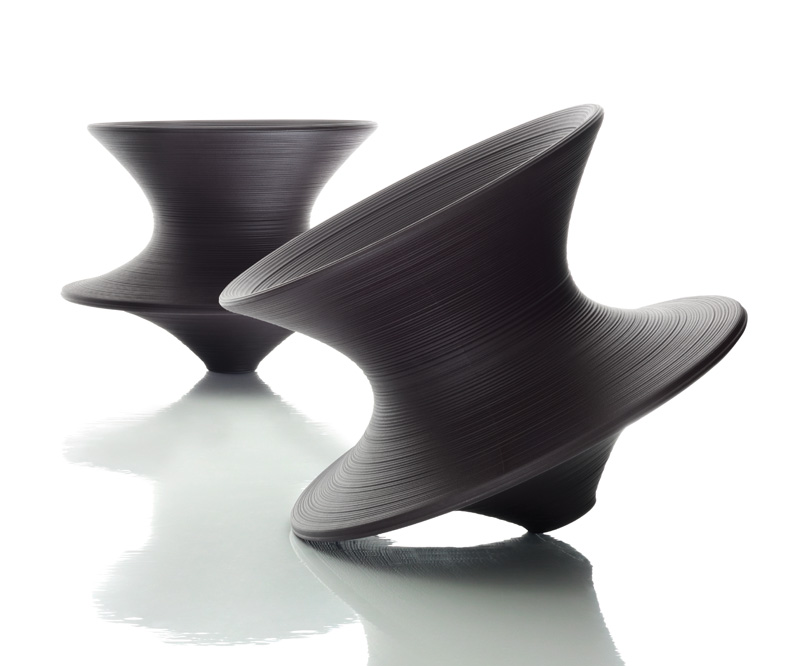 The Studio has at its heart a workshop, so the environment we work in has lots of examples of materials and techniques, forms and textures, and sort of experiential qualities of materials. We try and test from multiple viewpoints and often that means we then have to shift and readapt, so you’ll then distill it back to the essence of that idea. So we were using clay and plywood to try different geometries, and then gradually there emerged something that did seem to work. We approached Magis; we sent some images of our prototype. They responded immediately. The have really good vision to be able to spot when something will work. You stand it upright and it doesn’t look like a chair at all. It’s a confusing object. It only becomes a chair when you incline it.

The detailing that we put into the surface, a bit like a vinyl record, has those fine ridges because that then meant that you wouldn’t slide out of it, but it also meant that you get all these lines of light catching. I enjoy when people try the chair, but very honestly we hadn’t really thought that we were making such a funny, different, playful form of rocking. You want to make out that everything is deliberate, but there are lovely things sometimes which are a surprise.

Outdoor Gear: Stay In but Get Out!