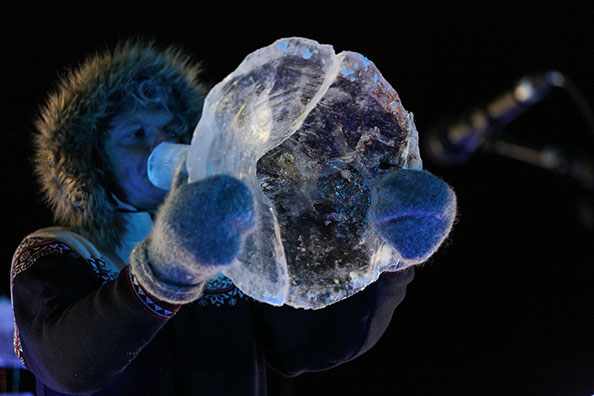 Terje Isunget has combined natural elements in his music using wood, stones, and metals in their original forms for years before he pioneered the use of ice as instruments in 1999 when he was commissioned to compose a piece using ice for the Lillehammer Winter Festival. Terje has also performed for the Ice Hotel in Sweden and on international television. He will perform with the Winnipeg Symphony Orchestra as part of the New Music Festival at The Forks using instruments made from Red River ice. 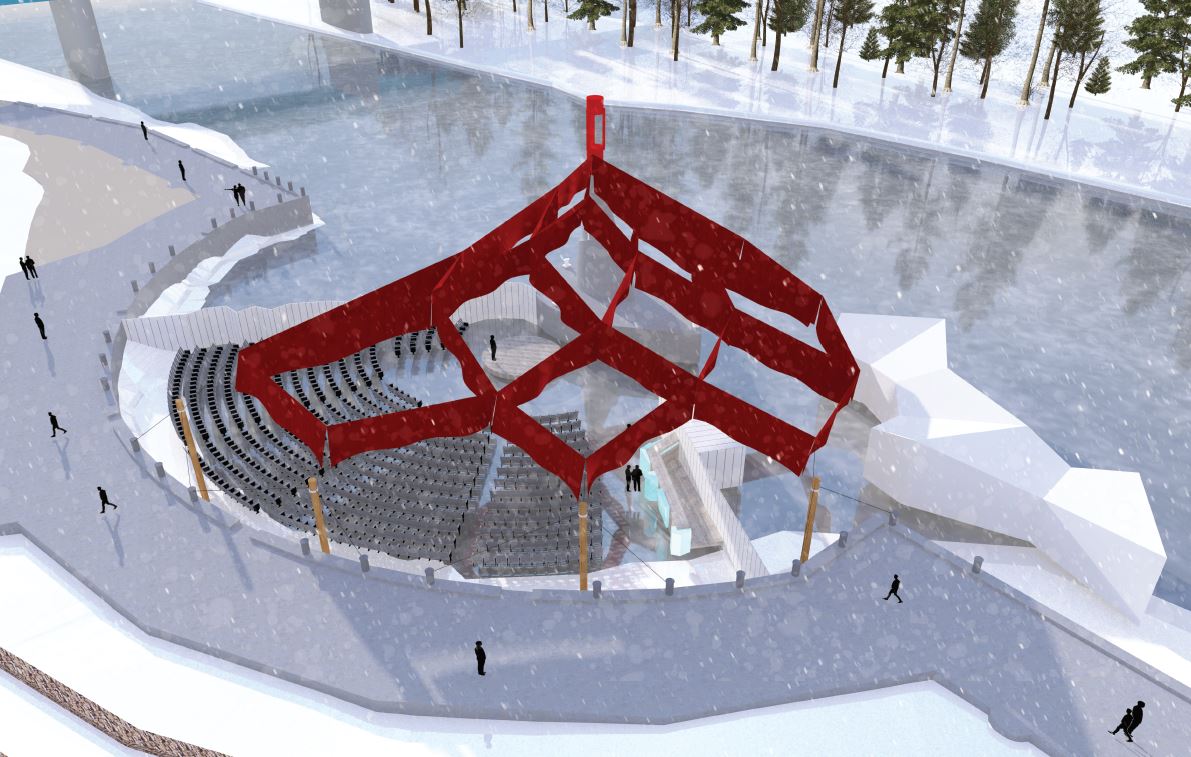 Pavilion Sub-Zero will feature a shimmering, colourful cloud floating above performers and audience members in The Forks Historic Port, the heart of the Red River Mutual Trail. With feature performances by invited artist Terje Isungset and members of the Winnipeg Symphony Orchestra, Pavilion Sub-Zero celebrates ephemeral qualities of the frozen river scape, through live performances, and the opportunity be together.

A new tensile structure will support “the cloud” of screens that will animate the entire space with colours and varying levels of luminance creating an infinite array of patterns on the ground. Loosely based on the traditional star blanket, the cables will define the space in which visitors can enjoy a variety of performances and even perhaps enjoying a beverage from the adjoining venue for the Festival du Voyageur.

Continuing in the tradition of collaborating with artists from around the world, this year’s pavilion will feature and ice bar and sculptures created by renowned ice architect Luca Roncoroni, as well as performances for the opening night of Winnipeg New Music Festival by Terje Isungset who will perform on instruments made from Red River ice. The ice sculpture gallery and bar will be protected from the damaging rays of bright Manitoba sunshine by the cloud floating above.

The project is being developed with students and faculty at the University of Manitoba Faculty of Architecture. 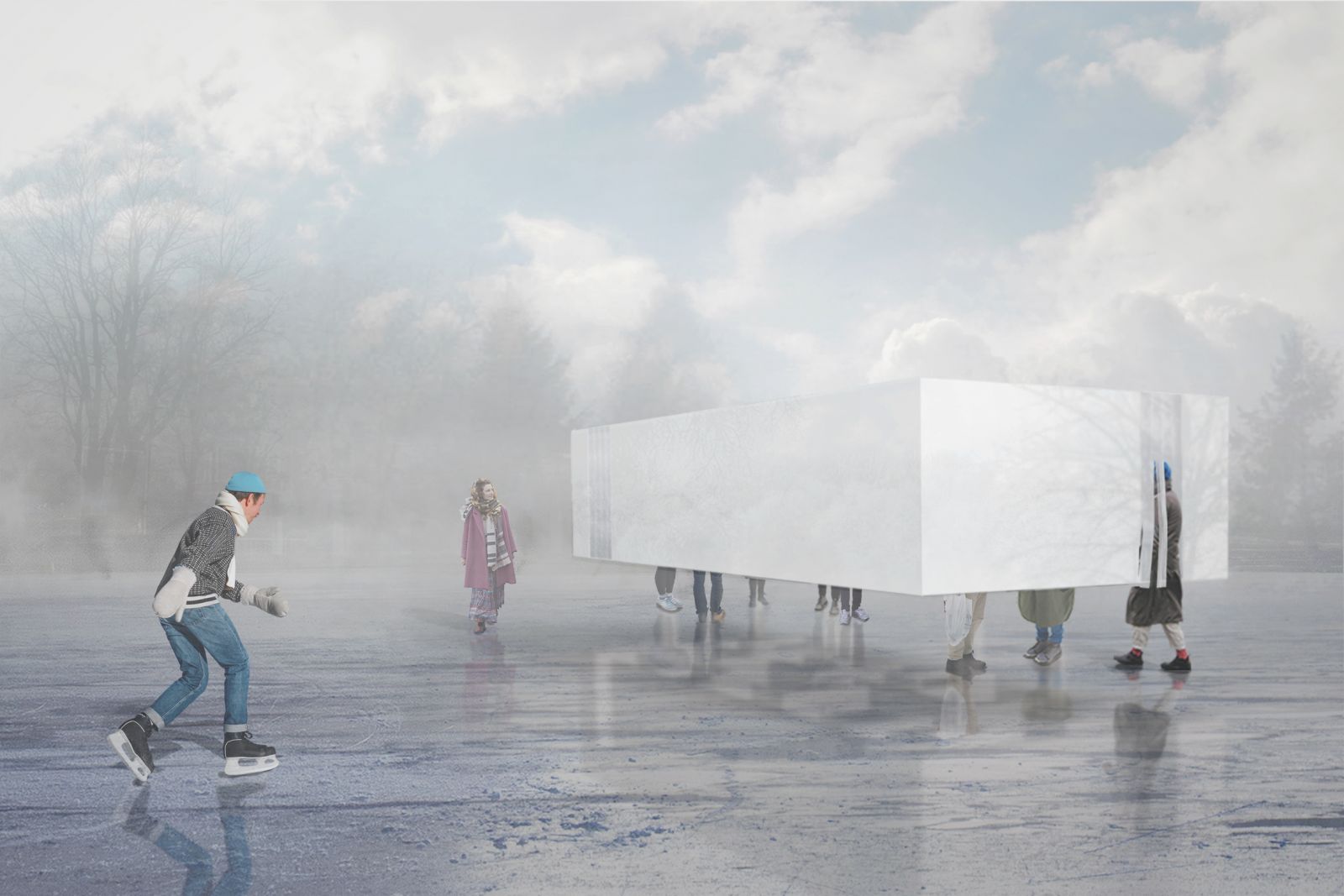 A large white box hovers over the ice; in the box, there a peoplewalk about, bide their time, or seemingly hover over the floor. What is happening? The visitor enters a labyrinth turned upside down by way of one of the two narrow openings leading inward. Corridors snake through the body of the building and end at benches. The visitor wanders around, optically cut off from the outside world, disoriented, and only perceives the legs and feet of other visitors. Sudden encounters bring strangers together, secret visual contacts through holes in the walls next to the
benches invite visitors to spy on their surroundings, difficult to recognize. A play involving distance and proximity.

Huttie is Winnipeg’s anthropomorphic warming hut destined to delight both the young and old. Inspired by the retro cult children’s T.V. series H.R. Pufnstuf, river trail visitors will be transported into Huttie’s technicolor splendour. Once inside, visitors are encouraged to relax and seek warmth on a plush gliding tongue while taking in the psychedelic cascading interior on its mouth. Huttie – it’s your friend when the weather’s rough!

Weatherman is a series of interactive art sculptures mimicking familiar man-made massing around the scenery along the Red River Mutual Trail – Snowman. The scale of weathermen varies from 5 feet tall non-occupiable objects to 10 feet tall pavilions with hollow structure inside, which can be occupied by people and function as warming huts. Composed of sculpted and stacked insulation foams inside and plaster coating outside, weathermen are painted in various colours in warm tone palette. Introduction of warming palette of colour in barren, frigid environment enlivens the site with visual and physical presence of warming huts. “Weathermen” are laid out in a simple 4 x 4 grid where they are all positioned on same ground elevation at the beginning of the installation. As snow piles up around the installation during winter storms, visitors can speculate amount of precipitation by using weathermen as a measuring tool with familiar human scale. Strategically placed mundane objects recreated in unexpected scale and colour can bring out curiosity and resurface one’s childhood winter memories. “Weathermen” aims to become a colourful warming hut invoking visitors’ past memories and creating new ones simultaneously. 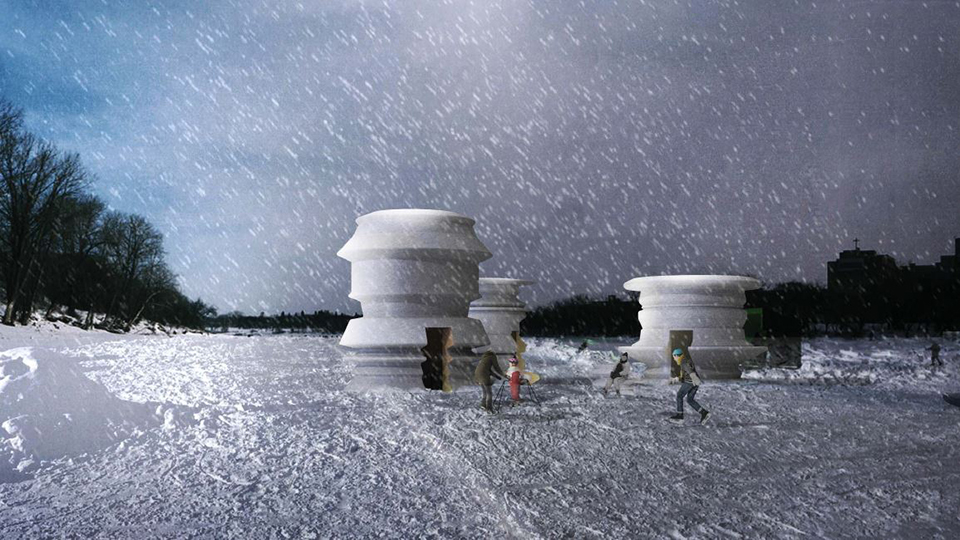 In celebration of the future WAG Inuit Art Centre, Michael Maltzan Architecture (MMA)’s design for the Warming Huts v.2019 is a family of carved forms that are as dynamic in their sculptural shape as they are in the negative space created between them. The huts are constructed as a kind of snow “topiary”, varying in height and diameter. Created from snow and ice, they integrate and are created from their environment. The glow of the light coming from within their walls can be seen from outside, transforming the huts into beacons of warmth and safety for the community of Winnipeg. MMA is the architecture studio selected to design the WAG Inuit Art Centre, opening in 2020. 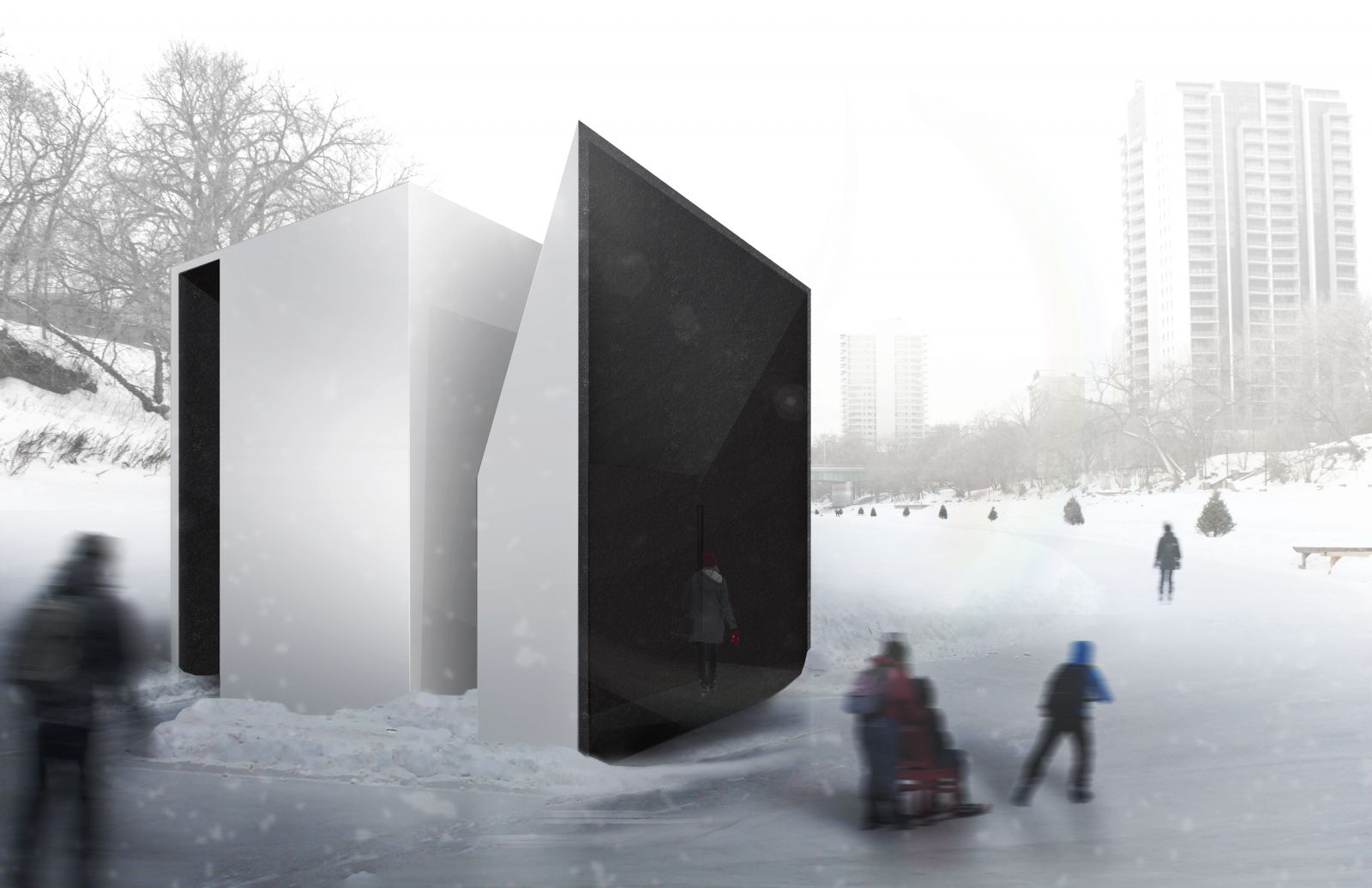 WHAK (Warming Hut for Anish Kapoor) is an art gallery space situated on the ice, pulling in skaters to experience the Mirrors of Anish Kapoor. The cube form alludes to Kapoor’s Stackhouse, his project for the 2017 Warming Huts edition, which incorporated thesame dimensions of five meters on each side. WHAK creates a delay in the experience through a sequence of differentiated spaces before the visitor finally approaches the artwork, generating curiosity and anticipation for what is inside. The whole space was proportioned based on Kapoor’s four-feet concave Mirrors, gradually unfolding into the gallery space. In this way WHAKis site-undefined but specific to the Mirrors. The white exterior blends into the landscape, and the black interior pulls the passersby in. While WHAK hits the ice this year, Anish Kapoor Mirrors are expected to occupy the space in 2020.

More information about Warming Huts 2019 is available via the official website, linked here.