The fairground alone was a zoo, with 386,236 (official number) bodies cramming aisles to see a couple thousand exhibitors split among the Salone Internazionale del Mobile, Euroluce, Workplace3.0, and S.Project. Add entire neighbourhoods like Brera, Tortona, 5vie, La Triennale and Ventura Centrale with twice that many gawkers, and it’s natural to wonder where they put the trauma centres to help deal with the PTSD (post-traumatic Salone disorder).

One day, French designer Emmanuel Babled saw “a butterfly leaning on a brick,” which gave him the idea for this chair. Originally prototyped in marble and shown as Salone 2018, this edition saw the launch of a commercial-ready version with an upholstered seat attached to a swivel base on one end of a rectangular foundation made of Corian or wood (at an off-site event Babled showed an even cooler version on a cork base). 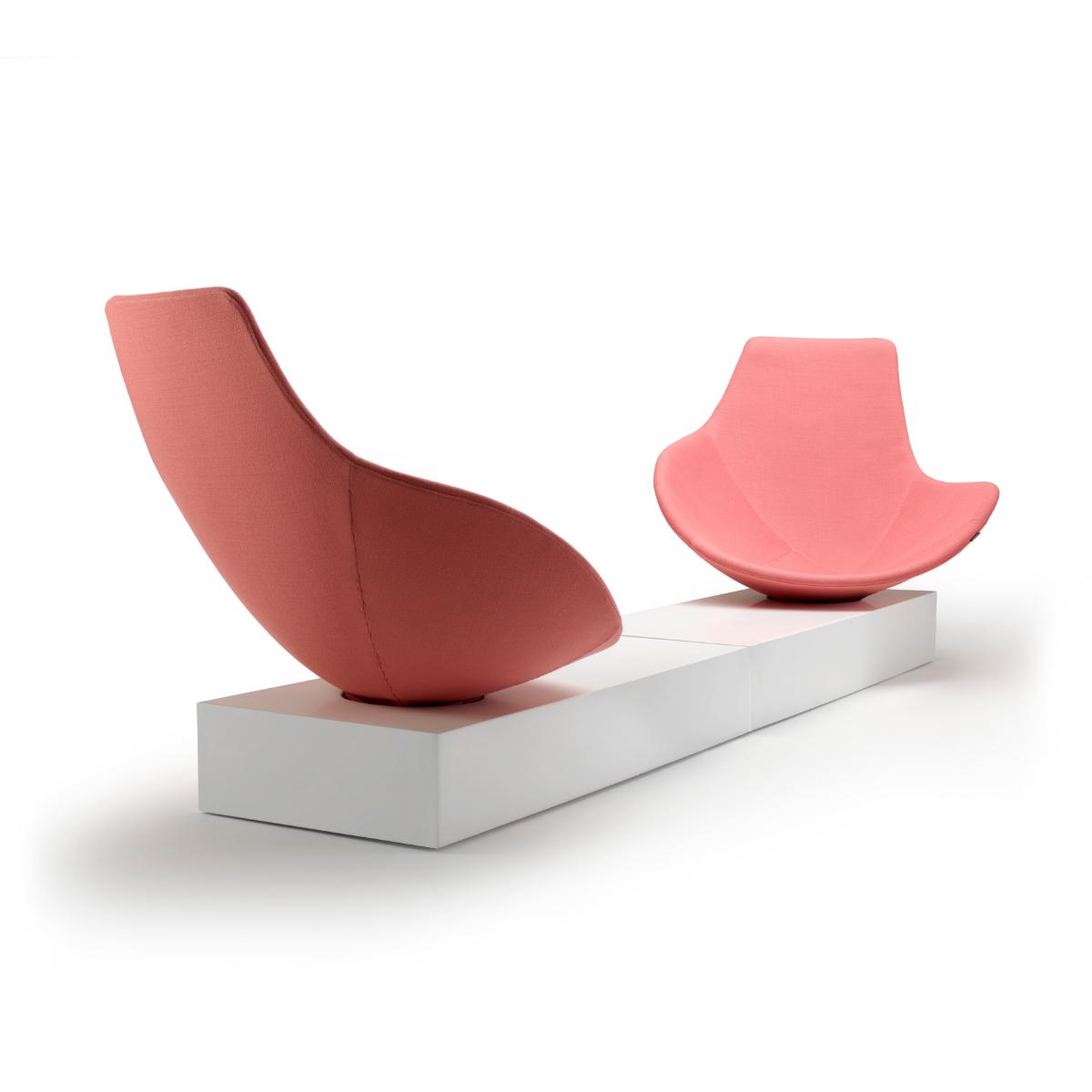 While everyone else celebrates Bauhaus, the wonderfully tacky pop design combo of Stefano Seletti and Studio Job are celebrating Bunker – Archie Bunker, that is – with this new Barcalounger. Bright gestural brushstrokes on printed fabric with hints of Memphis and the hand-made give this low fashion chair a high fashion look.

Marcel Wanders has entered the parasol game with this nod to the mysterious Japanese tradition of the geisha: stylised flower motifs for both the inside and base, plus a metal bow adorns the top, a typical accessory on the kimono of a geisha.

Although nothing is more Italian than espresso, Alessi has asked many non-Italian designers to take a stab at perfecting its vessel. The newest is by English architect David Chipperfield: with nods to the 1930s original by Alfonso Bialetti (Alberto Alessi’s grandfather), this 11-sided version has a flat lid with side knob positioned for one-handed lid lifting, and the shape and positioning of the handle avoids it being accidentally melted by the flame.

Possibly the smallest item designed by Antoni Gaudí, this wall hanger dates back to 1903 when the finishing touches were being put on Casa Calvet, constructed by Gaudí for the heirs of textile maker Pedro Mártir Calvet. BD has revived this item in its Art Editions, now available in waxed natural oak and hand-forged iron with a burnished copper and varnished finish.

Piero Lissoni began the KN collection at last year’s Salone with the KN01 and KN02 swivel chairs models, and added to the line this year with the KN04 chair and KN05 settee. Compact in proportion and texture, both have a fixed structure in chromium-plated or coated metal rod, and a shell produced in polyurethane and covered in leather or fabric.

Jaime Hayon has gone back to his roots: “The idea was to create a ‘typical’ Danish lounge chair, expressive and modern,” he says. Apparently “typical” means a solid frame (oak or black ash); an open, low-slung silhouette; decorative joints with gently rounded edges; and exaggerated armrests.

For this chair, designer Mario Ferrarini was greatly influenced by the elegance of the draftsman’s square typically found in the architectural field. Without any visible screws, it still has the sturdiness of a stout chair yet can be gracefully stacked in large quantities.

Ambiente: Under the Wire