Falling in a shimmering cascade down through the grand spiral staircase at this year’s Kips Bay Decorator Show Home, Toronto-based Unitfive Design’s metalwork Cherry Blossom mobile was one of the most remarked-upon installations at the event.

The Kips Bay Decorator Show Home, held this year from May 2-9, is one of the interior design world’s marquee events, housed in the grand Upper East Side New York mansion once owned by the former head of J.P. Morgan. Canadian designer Brian Gluckstein commissioned Unitfive to create the sculpture as part of his overall concept for the mansion’s imposing, four-storey staircase.

The piece consisted of over 4,000 brass “blossoms,” each individually handcrafted in varying shapes and sizes, strung on forty separate wires and interspersed with crystal beads. The 34- to 36-foot-long strands were then suspended on a frame under the leaded-glass oculus window in the roof high above. Sunlight from the oculus caught the blossoms and crystals and made them sparkle, as the mobile moved softly in air currents created as people walked up and down the stairs. 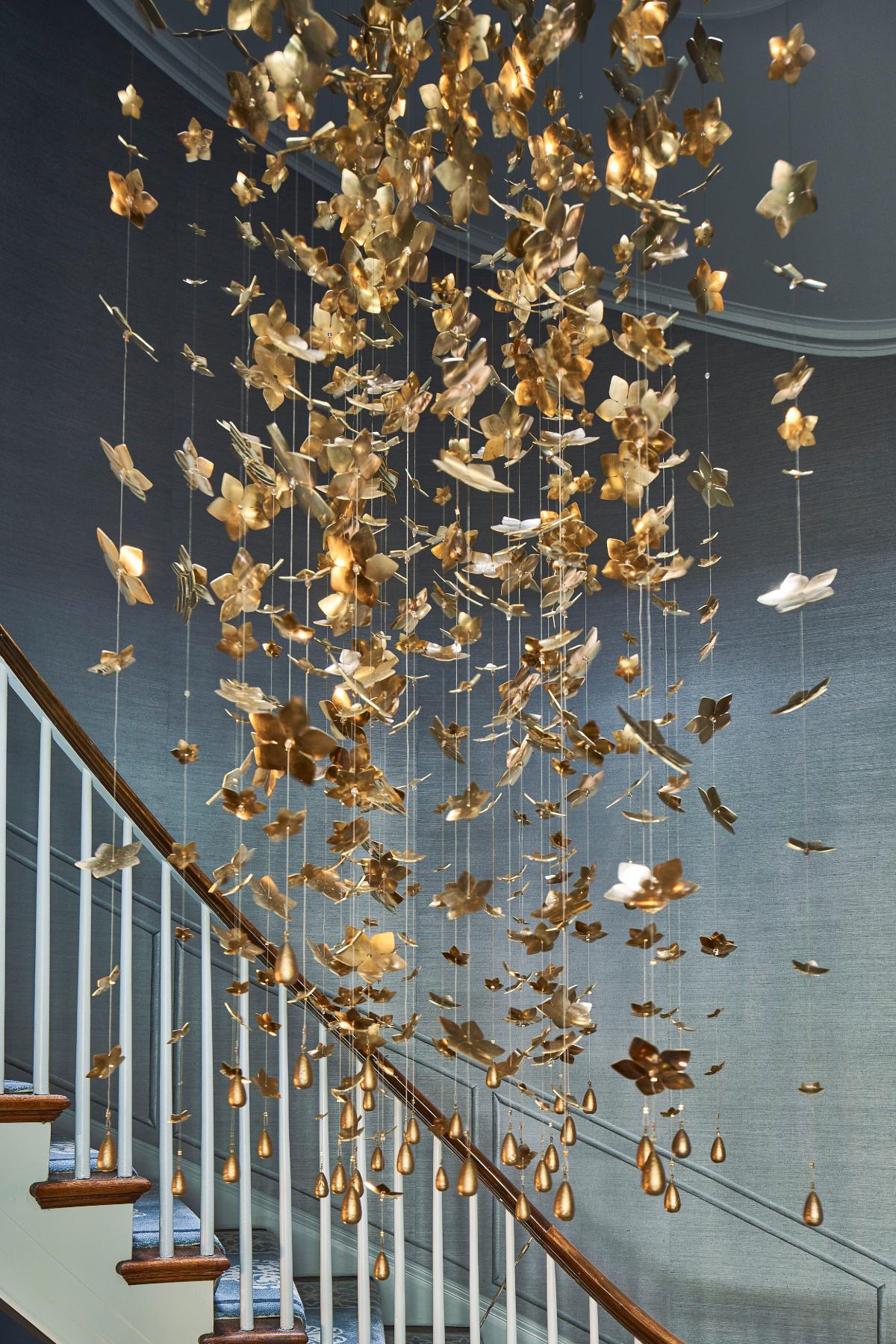 Lisa Santana, who with partner and husband Kelvin Goddard heads the Unitfive team, says the mobile was inspired by the cherry blossoms that fill the air in Central Park every spring. What’s remarkable is that it was conceived almost instantly, over the course of the initial phone call with Gluckstein. “We only had about three weeks from the phone call to the installation, so there was no time to do prototypes or wait for inspiration,” says Santana. “But with a four-storey spiral stairwell, we wanted something that unwinds as you rise. So the concept was inspired by that – and that fast.”

It wasn’t the design that took the time, Goddard adds, so much as the execution. “Each blossom was individually laser-cut, to give us the accuracy we wanted. Then each one was textured by hand, and hand-curved; it gives it a much softer texture than if you stamped them on a machine. Brass, when you hammer it by hand, changes slightly in grain and in colour, so each one has a more organic feel. It takes away some of the yellowness of the metal and gives it a softer, more matte finish.”

Carefully packing the strands to keep them safe and prevent tangling during shipping, then getting the mobile unpacked and into place in the mere five-hour timeframe the show home required – while working in one of the heaviest-traffic areas of the house – provided more challenges.

“There was an electrician working there at the same time, an elevator and door right nearby, and a contractor up on the scaffold assisting us with putting the strands up. And of course you have to keep the stairs clear because people are walking up and down them constantly. So it was pretty crazy,” Goddard laughs.

The partners credit Gluckstein with creating an overall concept for the staircase that caught their imaginations. “Brian was great,” says Santana. “What captured our attention in that first phone call was that he said he didn’t want to just put fabric on the walls and carpet on the stairs, but to have something truly customized. So the fabric was handpainted, with beautiful artistic watercolours and finishing details. I love that feeling, of materials that have a soul.”

The Office: Where we go from here (is anybody’s guess)