The decade may be fresh, but IDS’ raison d’être doesn’t seem so. But then again, when 50,000 attendees descend into the Metro Toronto Convention Centre over four days (with roughly 30 per cent being trade professionals), maybe there isn’t much incentive to mess with a model that works.

You definitely saw this; you just can’t remember if you saw it in person or on Instagram, which was part of the point (and problem, in my estimation). Potter and celebrity designer Jonathan Adler was asked to flip conventional expectations by presenting the hard material of Caesarstone quartz into something “soft and delicate,” but the real kudos should go to Ontario-based Unique Store Fixtures, which was able to construct a massive installation consisting of more than 75 slabs of quartz, each weighing more than 1,000 lbs, in four weeks.

Cut Out the Noise | Ezobord

This maze-like installation, designed by SDI Design using Ezobord’s sound absorbing panels made from recycled water bottles, drew attention to the fact that we live in a world “where we’re constantly switched on, and as humans, we often need somewhere to escape the rush, reset and refocus our minds,” said the designers. The installation ultimately won a Best Contract Booth Design award at the show, and deservedly so.

Although it took a few minutes for your eyes to adjust and your brain to figure out what you were looking at, Monogram’s all-glass kitchen installation designed by industry-darlings Partisans was impressive, if disorientating. Minimalist is one of two new product offerings the luxury appliance brand is rolling out in early 2020, the other being Statement. 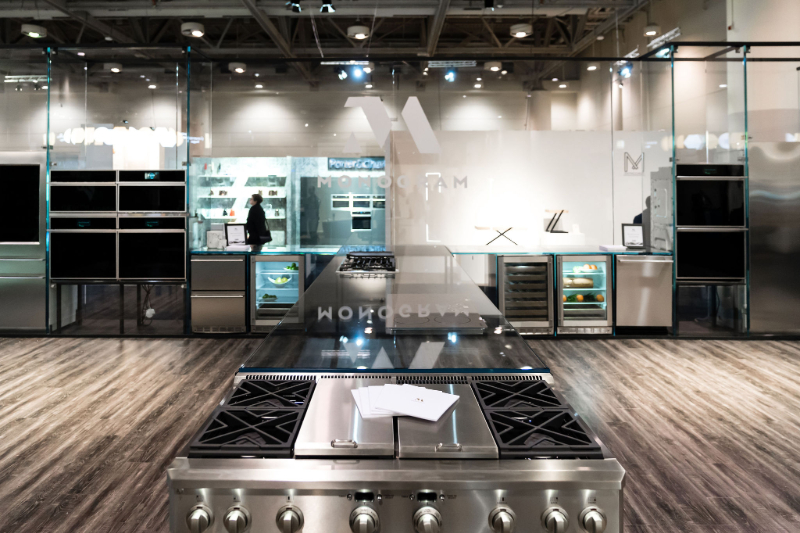 The Montréal-based manufacturer of premium hardwood furniture used IDS as the launchpad for a new collection by founder Jason Burhop. Driven by simplicity, the table and bench were designed with a solid wood top and a subtle cove detail on all four sides and an inset apron that curves into the legs. 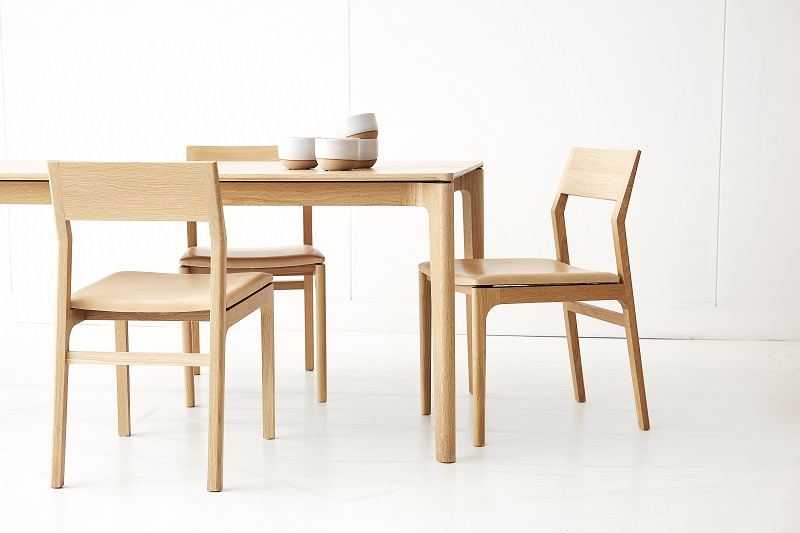 This is why we tell kids to stay in school! This brand-new company is the brainchild of Anthony Mattacchione, a 21-year-old fourth-year student studying architecture at the University of Toronto, but who discovered CNC machines in the Daniels Faculty’s Digital Fabrication Laboratory. The results are a very mature furniture line that includes side table, stool, and coffee table with cantilevered matte black powder-coated steel bases and laminated maple hardwood tops. 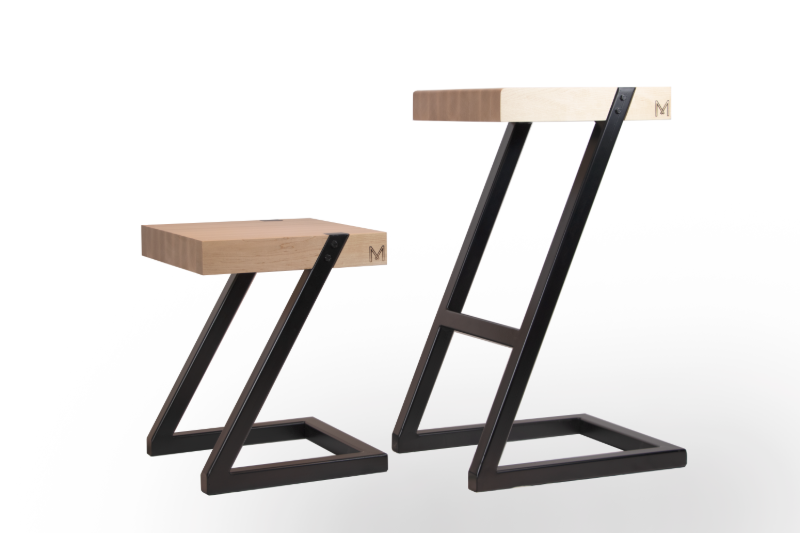 This technology-driven cabinetry company with a European design sensibility based in the Bas-Saint-Laurent region of Québec showcased two contemporary kitchen vignettes complete with their new integrated LED lighting system built directly into the cabinetry and that reliably delivers light upon smooth opening and closure of the cabinets and drawers.

The winner of the Best Prototype award hails from Winnipeg and is “loosely inspired by the modest waiting room chair” says its creator, Nicole Marion (who honed her product development skills at places like EQ3 and Gus* Modern). Muscular but inviting, the chair’s frame is two-inch diameter aluminum tubing powder-coated coral pink and supports Dacron-upholstered cushions. 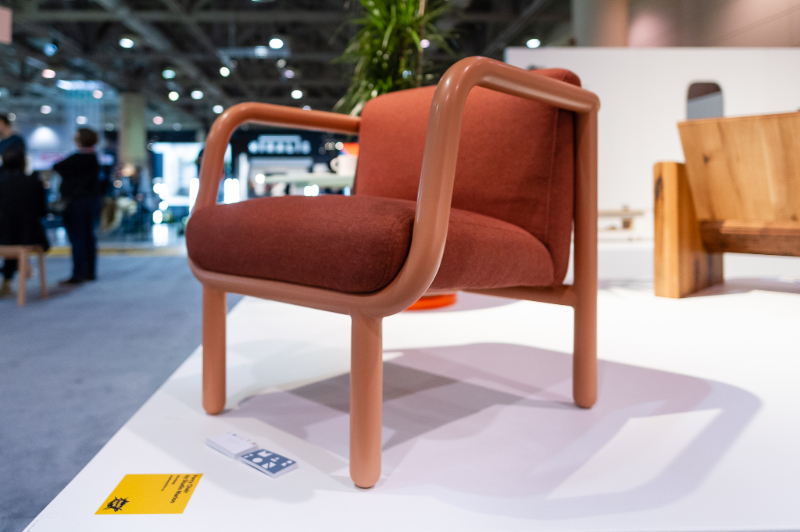 AutoDos and PowerDisk are two important words for this German luxury appliance brand, because they represent the newest upgrades to their G 7000 diswasher system, which automatically dispenses specially designed powder granulate detergent. Additionally, the new dishwashers can be controlled by an app and programmed from a mobile device, meaning all that remains for the user to do is load and unload the machine and, occasionally, to replace the PowerDisk. 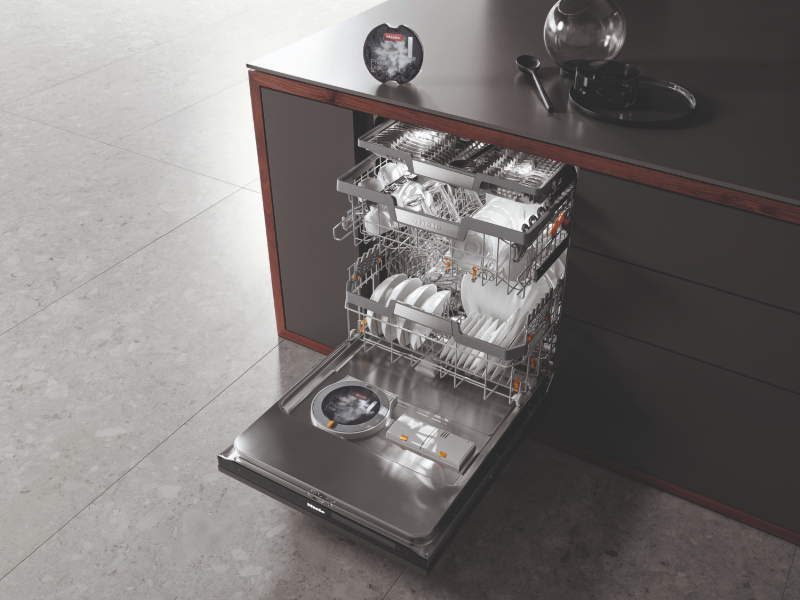 Continuing to do what they do well, Blanco expanded their popular Catris collection with a new model: the Catris Flexo featuring a flexible, matte-black rubber hose giving it a modern, industrial look. The faucet is available in two finishes: Chrome and Stainless Finish.

If there is an end product to performance art, this chair is a contender. Made of recycled metal, cellulose, wood chips and clay, a collection of household objects (furniture, vases, tapestries) are handcrafted using a century-old primitive rolling technique known as valkuvannia that involves coating a solid surface with a mixture of natural elements and that, according to founder Victoria Yakusha, is on the verge of extinction in Ukraine. Having toured the European trade show circuit, this is Yakusha’s first presentation of the Ztista (Ukrainian for made of dough) line in Canada.

Like a candy store for home chefs, the booth for this brand known mainly for sculptural bath fittings was bursting with new product, including extensions to their Nerea and Lollipop collections, a brand new “BK” PVD satin black finish and new Seven, Classic and Konic collections. On top of all that, Franz Viegener has decided to enter the kitchen category with a new faucet collection in multiple finishes.