The Office: Where we go from here (is anybody’s guess)

In the wake of COVID-19, the "Next Norm" in office design will likely favour clear connections between health and the physical environment.

The infamous invocation “May you live in interesting times” seems particularly apt these days, doesn’t it? Widely assumed to be a translation of a traditional Chinese curse, there is actually no recorded evidence supporting this assumption, a fact that recalls another popular invocation, this time about “assumptions” (as a reminder, the joke is based on the spelling of the word “assume”). As superfluous as that sounds, it neatly encapsulates the “interesting” situation designers currently find themselves in, because to make any headway in a discussion about what the future of the workplace will be post-COVID, we must make at least a few assumptions. So, let’s start with those.

To begin with, the pandemic has undeniably demonstrated the technological feasibility of working remotely, meaning that more flexible work-from-home policies will almost certainly gain adoption. Logically, this implies that fewer employees coming into the office, due to a combination of layoffs and an increase in working from home, could mean less need for office space. However, safety protocols that require people to be spaced at least six feet apart could cause more demand for office space so that the people who arrive to work aren’t as packed in as they used to be.

Tenants are currently reviewing office space strategies, but scope of changes and impact will only unfold when leases are renewed. In the longer term, the potential reduction in space requirements associated with the increase in the number of work-from-home workers will likely be offset by less density per workstation, but it is not yet clear whether the balance will be positive or negative, or in what proportions.

Ultimately, the nature of existing office leases will likely temper upheaval in the office market. That said, there will be many waves of change and immediate re-entry to the workplace is just the first one. While it seems safe to speculate that the ubiquitous open office approach will likely lose favour in the short- to medium-term, for most companies a complete redesign is also not realistic. This is where design professionals will be called upon to leverage their skills to create spaces that make occupants feel safe, comfortable, and supported even if drastic overhauls are not in the cards.

Howard Mark, co-founder of Oaktree Capital Management, hit the nail on the head when he said this: “These days everyone has the same data regarding the present and the same ignorance regarding the future.” With so many parts still moving and so many variables in the equation still undefined, the office environment’s future is largely shrouded in mist. However, several aspects seem to have naturally presented themselves as “top-of-list” for space managers.

First, we will undoubtedly see an increased commitment to hygiene and sanitation from both a workplace operational aspect and a space user aspect. Strict protocols to ensure thorough maintenance of the working environment must be applied not just to janitorial staff but employees as well. “Hand washing must be approached as both an infrastructure issue as well as behavioural one,” says Rachel Bannon-Godfrey, Stantec’s Denver-based Global Discipline Leader for Sustainability. Expect to see hand sanitizer stations being treated like emergency exit signs: able to be seen from any point in the office. “Strategically positioned hand-washing infrastructure, including space clearance in sinks, can limit touch points and reduce opportunities for pathogen transmission,” says Bannon-Godfrey. Of course, restrooms will be highly scrutinized: from proper water temperature and pressure to ensuring automatically controlled/sensor-based faucets run for the recommended time. Lights placed over sinks can provide a visual cue on timing, and “dynamic signage can act as a visual reminder,” says Bannon-Godfrey. “For situational cues to be effective they should change frequently to avoid blending into the background noise of restrooms.”

Next comes the traditional workstation reinvention. As workers begin the transition back into the workplace, companies will undoubtedly experiment with layout geometry as they reconfigure desking areas. Goodbye classic linear bench desking styles and sitting directly opposite someone: hello desks at 90-degree angles from one another, facing different directions. One trending method is a checkerboard approach, where only alternate desks are used in a linear run. Hot-desking will likely be shelved in the short-term (and at governmental insistence) in favour of employees having a dedicated space for a day to avoid cross contamination, and desking reservations may become more rigid and enforced.

For the desks themselves, John Comacchio, senior vice president and Chief Information Officer at Teknion, believes companies will be reverting to cubicle-like enclosed structures, but with an updated twist. He calls this the “cubicle of tomorrow,” a space where employees will feel comfortable and in control of their own environment, without feeling cut off from the larger office space. Enter separation panels. Undoubtedly an aesthetic anathema to designers, evidence is mounting that separation panels work to contain microdroplets at a workstation. In a webinar with Humanscale, ergonomics and indoor air quality expert Dr. Alan Hedge showed two simulations of what happens to the microdroplets dispelled when someone sneezes at a workstation: at a desk without panels, microdroplets move quickly across the room and encounter someone eight feet away; at a desk with 30-inch tall panels microdroplets are stopped.

Collaboration spaces will of course need a major re-think. To adhere with physical distancing protocols, conference room capacities will be reduced, while in smaller enclosed meeting spaces, where distances cannot be achieved, companies may consider repurposing these as single occupant spaces, ideally optimized for video conferencing. “With an increase in remote working, virtual collaboration technology will need to be much more integral to collaboration spaces to create an inclusive experience for all, regardless of location,” say experts in a whitepaper produced by Spacestor.

The Long, Winding Road Ahead

What has been made clear is that most people can work effectively from home, but many also want to return to the office at least some of the time. This means small businesses that cannot make big design changes will need to alter how they interact with the work environment. It is likely there will still be a need for open/unassigned workspace, but it will take a different form, with perhaps more individualized settings supporting various types of work. Businesses may decide to assign a different purpose to each day of the week: Mondays for quiet, focused work; Tuesdays for sales teams that need interaction and collaboration, and so on, where both time and space are allocated to serve the purposes of different teams, roles and personalities. In a webinar discussion with Spacestor, Adrienne Rowe, global director of workplace strategy at Merck, sees it as “resetting and really treating [these] environments like hospitality environments so that people feel safe and comfortable in them on a day-to-day basis.” 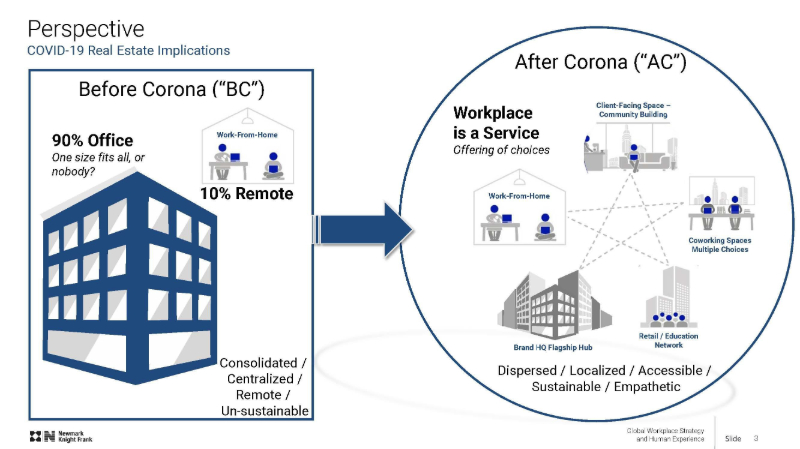 Workplace design will need to capture why people want to come into a space and what they want to get out of it. But be warned: that will be a moving target, making a post-pandemic workplace seemingly in perpetual beta. With few, if any, precedents to draw upon, design decisions moving forward will need to be data driven, behaviour based, individual and with no blanket solutions. That said, re-entry will happen, and its approach will need to be practical and achievable, as illustrated by the sentiments of 115 Canadian commercial real estate executives from white collar companies surveyed by Altus Group regarding the impacts of COVID-19 on the office sector. In the short term, they said, the timid return to the office will not have much impact on revenues (except for parking revenues). However, protocols for returning to the office with physical distancing measures involve more resources for training, security, cleaning and disinfection. Physical distancing and the resulting additional operating costs will remain as long as there is no vaccine or risk of a second wave of COVID-19 cases, and perhaps beyond.

“I don’t think the race to create super-tall buildings with their packed elevators and dense, open-plan model of workplace can continue as the pro-forma that makes those buildings economically feasible will change or even disappear,” says Caroline Robbie, principal at Toronto-based Quadrangle, in an op-ed. “What if the traditional one-company lease arrangement goes out the window? The model of shared space to facilitate accidental creative innovation will take a hit as potential minimum space per person legislation will, like tall buildings, affect the real estate model, making shared offices financially untenable. The model might change to something similar to discipline-sharing models. For example, aligned architecture, design, construction, and engineering firms might enter into a joint lease agreement based on timesharing rather than defined physical footprints. The coming changes might result in an increased demand for co-working services as companies elect to invest less in permanent space and more into distributed work requirements from home.”

“The reports of my death are greatly exaggerated” said Mark Twain in a famous cable sent from London to the United States press in response to his mistakenly published obituary. The same is true of the office: it is not going anywhere anytime soon, which gives the design industry an incredible opportunity. “The global pandemic has taught us that it is okay to take a breath and assess what is truly important,” says Dyonne Fashina, principal of Toronto-based Denizens of Design. “The best responses will result from deep research, strategic thinking and a focus on the wellbeing of people. When applied to physical environments and the businesses that occupy them, we can use this opportunity to produce highly efficient spaces with happy employees.”

Bertazzoni marks its largest number of introductions with 100 new products