BlueArck: In From the Cold

From soft draperies to cozy chairs and reading lamps, Edit Studios creates an environment of comfort and warmth that retains modern workplace functionality.

A common narrative these days is how COVID-19 put a stop to so many design projects that, while well on their way to executing a beautiful space, were conceived under pre-pandemic expectations that are now considered problematic, resulting in countless “returns to the drawing board.” While true for many office projects, it is not the only narrative. In fact, there are a few creatives that had a design solution in mind even before the pandemic hit, and while lockdowns certainly caused workflow disruptions, it further crystallized a design approach ideal to post-pandemic return to work.

Such is the case for a new office expansion of BlueArck Private Equity, located in Vancouver’s landmark Marine Building. Working closely with the firm’s managing partner, Aleem Ahamed, the team at Vancouver-based Edit Studios adopted an aesthetic that dispensed with conservative design tropes generally associated with wealth management firms in favour of a modern and welcoming approach that mixes French provincial comfort with the sophistication of a modern Parisian office: conventional dark woods and leather chesterfields were jettisoned in favour of a light, airy palette of herringbone floors and luxurious drapery.

This move towards a warmer atmosphere reflects a deliberate choice intended to create an environment that attracts a more equal mix of females into the profession. “From my first conversation with BlueArck, it was clear that the founder is committed to a culture of balance, not only between work and life but also in the composition of his team,” says Janay Koldingnes, founder of Edit Studios.

Upon immediately entering the space, one is met with a reception area that feels more like a living room. Nearby, a modern bar is outfitted with all the comforts of the home highlighted by book-matched black and white marble with gold accents. Hidden doors masked behind intricate moldings hide the inner workings of the office and soft draperies provide a way for staff to share spaces that can be easily cordoned off for privacy. Molding and wainscoting accent the walls, while modern furniture pieces, rich marbles, and traditional French light fixtures juxtapose old with new.

“Our design community has been influenced in many ways by Silicon Valley, adapting the idea that the office needs to be everything to everyone. The goal: keep employees on campus and working as much as possible,” says Koldingnes. “There was a period where bunkbeds or cabin cubbies were a staple in offices for employees to take a nap. There is a balance that needs to be struck between offering amenities and perks that make employees’ lives easier versus turning the office into a funhouse that can lead to distractions and burn out for staff in the long run.” At BlueArck, it was important that the office feel like a home – “a place to congregate, break bread, and talk” – but not attempt to be a substitute for it. “While [Ahamed] was spending capital to create an amazing environment for his staff, he was also clear that he did not want people staying until all hours of the night,” says Koldingnes. “Work hard, get it done during the day, and get home to your family. I personally think most companies should adopt this mentality for the long game.”

Although the design team was armed with a clear and solid plan for the new office, lockdown disruptions still created many hurdles. FaceTime, 3D scanning and other video conferencing for meetings and site visits, and even socially distanced “garden gatherings” to show samples, became the weapons of choice. Replacement products were sourced from local suppliers to fill gaps made by international supply chain breaks, for example engineered flooring from Kentwood Floors replaced alternatives from China, and porcelain slabs from Julian Tile replaced thin Italian veneer. “Originally, we were going to source all metal and glass office front systems through Steelcase, which specializes in pre-order modular architectural walls [that] arrive as a kit of parts easily assembled onsite. Unfortunately, due to lead times we were forced to re-evaluate,” says Koldingnes. “We partnered with local Aura Glazing, which implemented our ideas into a product where everything was sourced and produced by local trades. Even our custom metallic pulls were designed and installed through their shop. We were all very happy with the results and glad that we could shore up the local economy in any way we could during such a tumultuous time.”

Aesthetics melded with planning work together to make it easier for teams to come back to work, as the space is set up for everyone to have their own office and mask policies will be in effect in the common areas. Overall, the pandemic reinforced not only the concept but also a commitment to creating a space where staff feel comfortable joining or transitioning back too.

Janay Koldingnes on the permit process

Often considered one of the more headache-inducing parts of the design process is navigating the permit protocols. How did the lockdowns in Vancouver affect that part of your work on this project?

We submit many permits each year through the City of Vancouver and have come to know what to expect of the process. When COVID hit, we were concerned about how this would affect the permitting process for our jobs that were underway, including BlueArck. We assumed we’d need to add another two to four weeks onto the processing time for the permit. Normally you can expect a Tenant Improvement permit to be issued within a six- to eight-week time frame if you’re lucky. Surprisingly, we received our permit in four weeks which is unheard of.

The Building Permit application process was conducted digitally for our submission in the height of spring 2020’s COVID lockdown, but we were still required to drop off physical documents in addition to the digital submission. It took some time for the City to get organized at first. Procedures were not clear, different instructions were given on different days. To be fair, things were changing so dramatically that this period of chaos was expected.

For example, I recall receiving an email from the City requesting the Building Permit Package be dropped off in a box in front of City Hall and they hoped that Phil, the onsite security guard, would be available to grab it! Not exactly the best plan, but a plan at least.

Over time, the instructions and procedures did get worked out and we believe the City has put itself in a great position to see even more improvement to the process. We worked alongside municipal plan checkers, administration, and inspection field reviewers to get our permit approved during these unprecedented times in record speed. 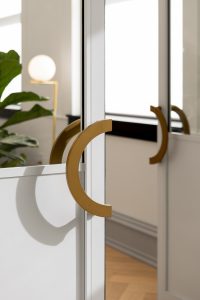 How difficult was it to navigate the City’s partially digitized permitting process? Did it make things easier or more cumbersome?

Shifting the Building Permit process online made the City of Vancouver revamp their systems to meet the demands of the 21st century. They allowed developers and design teams to submit their drawings electronically for the first time.  Unfortunately, they still require stamped and sealed physical copies to be provided later in the process but at least it is a step in the right direction. We hope that through his experiment, the City will see the benefits to moving online and will transition the rest of their submission process in this direction. Currently, the City of Toronto has an online option that allows most of the building permit submission process to be completely digital. Electronic seals have become the standard which is great to see. The City now allows what used to be in-person meetings to be conducted virtually, which is a huge relief for most. These virtual meetings are allowing stakeholders and consultants from all over the country to attend without having to board a plane. This can save thousands of dollars in air travel, accommodation, and expenses.

How important it is for Vancouver to complete its digitization of the entire permitting process, like Toronto and Edmonton have done?

Critically important! The City of Victoria has also completely switched to digital permitting. The City of Vancouver has made some headway in changing their process for the better, for example digital permit submission eliminates the need to line up at the City for what can be hours on end; all trade permits seem to have transitioned to online which again helps with removing an extra trip to the City for trades to pull their permits; and they allow virtual meetings to take place for Design Panel and Pre-Development meetings.