Jean Verville blurs the lines between architecture, theatricality, and playfulness in a new single-family residence. 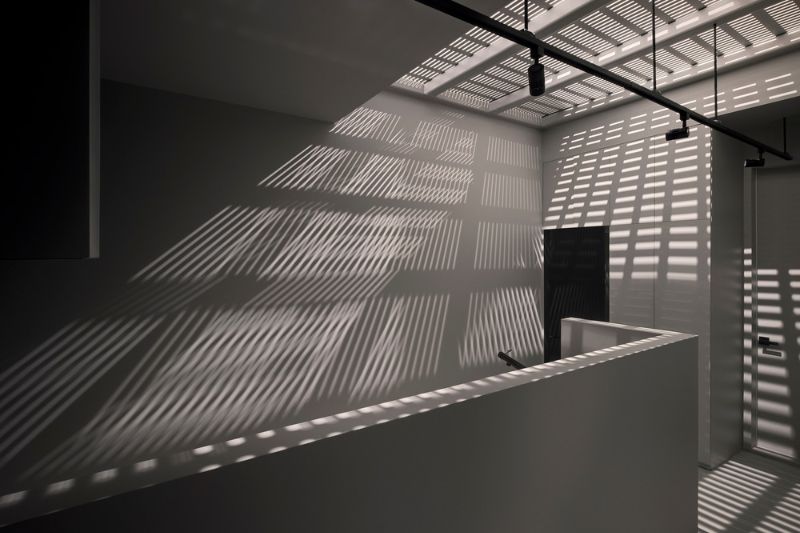 “All the world’s a stage, and all the men and women merely players.” Perhaps this opening line of Jacques’ famous soliloquy in Shakespeare’s As You Like It, minus the dismissive “merely,” inspired Montréal actors Sophie Cadieux and Mani Soleymanlou’s approach to their renovated house.

The clients, say Verville in our interview, knew from other artists that the firm’s signature approach was not about a style, but an intensive process of inclusion mediated by playfulness (the words play, playful and playfulness frequently popped up in our conversation). While the architects seek to implant new ideas, these are then rebounded back from the client in a “playground” of creative interaction. “When people can play with us in such a process, it can be very profitable as the clients become more secure with the results,” he says.

The actor couple wanted two key elements. First, as the original house belonged to Cadieux, they wanted something quite different that would reflect their partnership and young son. But second, as actors and directors they wanted a working space in which they could both imagine “spectaculars,” that is theatrical compositions, while still meeting domestic functionality. While the design was prior to COVID-19, the result has proven to be a serendipitous work/live domicile.

The architects started by inserting a central steel-framed shaft inside the 20-ft.-wide brick row house dating from around 1900. This openwork structure extends down from an eight-by-eight-foot skylight to the kitchen on the first level, 40 feet below. But this is not a simple open shaft, although it does ensure natural light reaches deep into the boxed-in residence. Instead, it is mediated by two steel plate floors at the third and second levels. Both are perforated with a bespoke, laser-cut pattern. While also ensuring structural integrity, the frame boasts several walls of porous steel mesh overlooking a second but completely open shaft. Cut through the upper two levels, its base is the top of a three-quarter high pantry volume serving the kitchen.

From the first level, one ascends stairs to the top of the pantry then spiral upwards through a series of platforms before crossing the second level’s perforated floor. Stairs parallel to the opposite wall ascend to the top level. This “selective subtraction of floor areas,” say the architects, is about freeing the core for a new and very theatrical vertical progression. While there are three basic levels, these are embellished by the gradual unfolding of a succession of 10 versatile and multifunctional platform stages usually separated by two or three steps. Frequently, only partial walls or mesh define these “meandering” pauses. This ensures a mediated transparency that generates a multiplicity of “points of view in space and new perspectives on the presence of others.” These series of mini stages may be primarily circulation, activity spaces or simply a small sitting form that minimizes the need for furniture.

Around the edges of this vertical unfolding, some of the existing, more traditional rooms have been retained. On the first level, located a half-level below the street as is common in Montréal, are an “everything” room, the open kitchen as well as a bathroom, pantry and front studio. The second level hosts two bedrooms and a bathroom as does the third level. But even in these more traditional spaces, Verville emphasizes flexibility. “There is no specific function for a space,” he states. “The clients can move uses, like using a room as a bedroom, but then another time as an office, another time as a play area or guest quarters.”

If playful is such a core design principle, why then are all surfaces a monochromatic grey? Elsewhere, Verville has stated, “the great calm of monochrome greige and the changing and dancing light offer as much visual spectacle as inspiring spaces for theatrical rehearsal, and even soon the possibility of performance before a small audience.” But, he tells me, “colours are not important to me, I accept colour or material from the client.” Consideration was given to white, bright colours and even gold. But it was important that the colour be monochromatic to unify the space and not cause the exposed steel structure to define the space. White was rejected as creating too much drama, too much luminosity with dark shadows playing off white. Grey better supported the eventual addition of multicolour elements. The clients have begun experimenting, already adding plants for a green effect. They are also working with artists imagining the house as a canvas for murals and are on the lookout for very colourful objects to incorporate into the spaces.

Shakespeare’s moribund anti-hero Macbeth whines near the end of the play, “life’s but a walking shadow, a poor player that struts and frets his hour upon the stage and then is heard no more.” Evidently Cadieux and Soleymanlou disagree. Across MSO:Play/Pause’s stages they intend to generate many life affirming moments.