Christopher Bates Studio: Either, And, Or

dkstudio Architects blends, blurs, separates and reconfigures the functions of a workspace that wears many hats.

It cannot be overstated how much of an anchor the Toronto Eaton Centre is to the downtown core. One of the city’s top tourist attractions, it carries the mantle of the busiest shopping mall in North America in terms of pedestrian counts with over 52 million annually, comparable to what Times Square in New York City sees. But unlike Times Square, which New Yorkers would argue is primarily congested with out-of-towners, the Eaton Centre is equally important to locals, functioning as a meeting point, shopping hub and coming-of-age landmark for youth.

Locals will think they know almost every square foot of the mall like the back of their hands, even citing the office towers that bookend each side of the mall. But there is a tiny sliver of space most are probably unaware of: the Galleria Offices, hovering two storeys above the commotion of the public concourse yet below the vertically driven corporate office tower above. This curious interstitial zone with an equally curious tenant mix caught the attention of one of the rising stars in Canada’s fashion scene: enter Christopher Bates.

The Toronto and Milan-based fashion designer was looking for a flexible multi-use space where he could both create, display, expand and market the clothing lines of Christopher Bates Studio, and saw potential in a 1,000-sq.-ft. box. He also needed a team to help him construct a nexus between fashion and architecture that uses design to amplify brand, so turned to Toronto-based dkstudio Architects (interesting side note: the two met at The Buildings Show in December 2019 when Bates was a panelist on the Interior Design Roundtable titled Cross-Pollination: Embracing Inspiration from Alternative Disciplines, organized and moderated by myself).

What dkstudio did to the space was a clever exercise of analyzing potential functions, separating the component parts of those functions, and then throwing them into a blender, such that the pieces all have multi-personalities but still fit together, like a sliding tile puzzle where every end-configuration works. Is it an office; a showroom; a creative studio; event space or warehouse? Yup. All of the above, whenever the need arises. 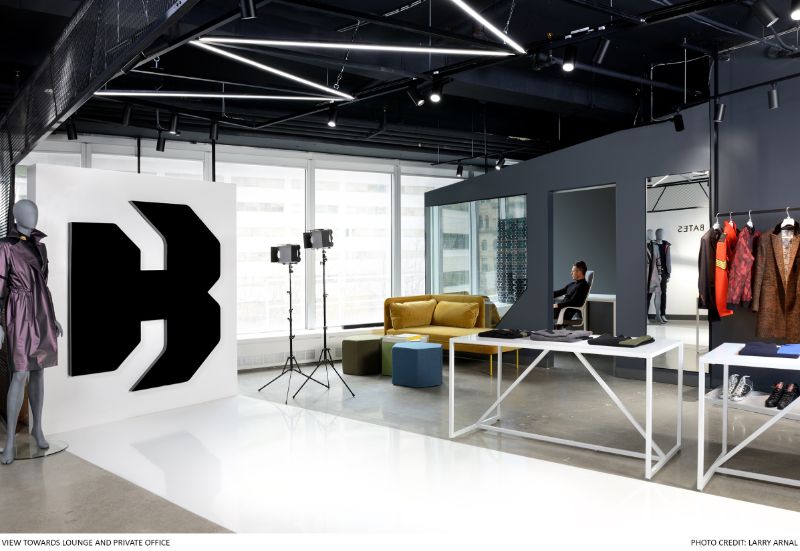 And to be clear, this is accomplished without a traditional retail storefront. As one takes the short elevator ride to the floors of the Galleria Offices and walks down the undistinguished workplace hallway, the experience is akin to attending appointments at an accountant’s office or an osteopathy clinic. It is not until the door is opened that shoppers, here by appointment only, are hit with the Studio’s wow factor. They immediately step onto a glossy white runway, punctuated at the end with an oversized three-dimensional logo wall that forms the backdrop for the “stage” visitors now find themselves strutting down.

The Studio’s flexible design carries hallmarks of both high fashion and an urban industrial minimalism that relies heavily on a stark black and white palette balanced against a chiaroscuro play of light and shadow, amplified most vividly by the ceiling’s zigzag lighting that reflects on the white epoxy runway in a not-so-subtle visual metaphor of stitching on a high-quality Italian garment. The urban presence is continued throughout with an exposed concrete floor, raw exposed ceilings, and street-style metal mesh partitions. Angles and geometries add dynamism to the space and echo the bold hexagonal form of the brand logo. 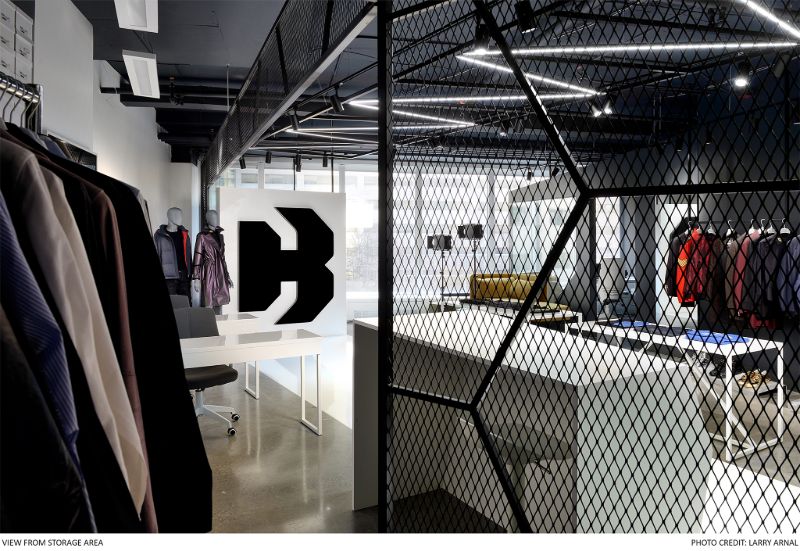 Almost everything in the Studio serves multiple duties, allowing for flexibility of use. The host station doubles as a cash wrap and a bar; work desks for associates double as product display surfaces; the lounge is a prime location for media interviews and events; and Bates’s private office employs a two-way mirror so he can keep an eye on everything. Other lighting tools are moveable as well, allowing for customizable scenes such as fashion shoots, private shopping experience, design charettes or launch parties and runway shows.

Opened in October 2020, the appointment-only system meant an observance of strict pandemic protocols was possible, and thanks in part to Bates’s reputation and some clever marketing the Studio has seen brisk traffic. Even still, nothing in the space is permanent. In fact, almost everything is dismantlable, including the logo wall, ready to move when and if Bates feels the conditions are right, reflecting a strategic economy of means that mirrors Bates’s optimism and anticipation of near future expansion and growth.