Blending footage shot in two colonial archive buildings—one in Lagos, Nigeria, and the other in Bristol, United Kingdom—the film is a double portrait of the enduring visual, sonic, and psychic imprint that colonial images continue to generate, despite the disintegration of matter and memory. 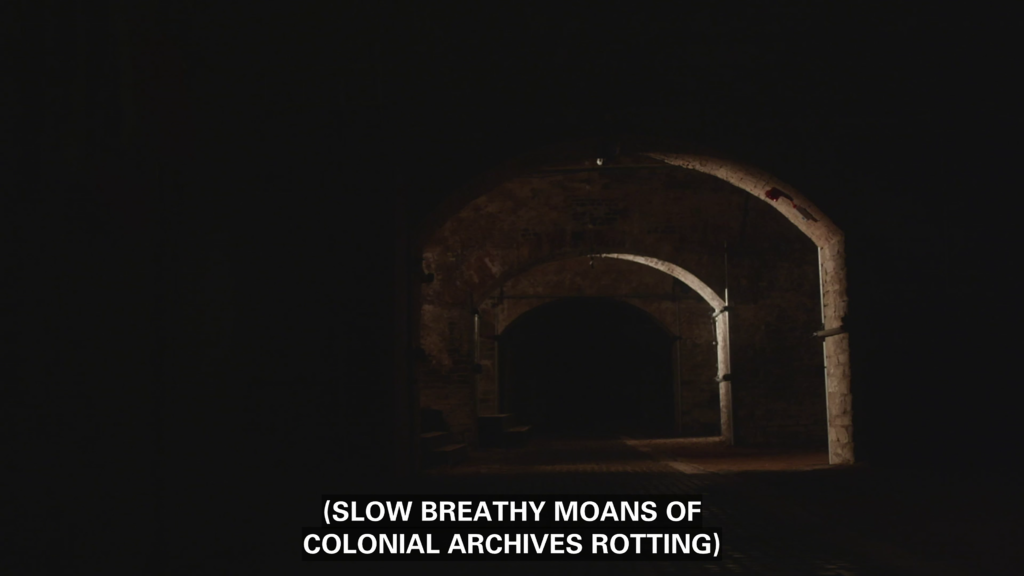 A noir fiction that combines the tenor of a radio play with the speech pattern of a corporate video tour, Igwe’s film imagines what might have been lost from these archives. She incorporates footage of their architecture coupled with sonic spatializations that point to the hauntings of colonialism that each space has come to represent.

THE REAL STORY IS WHAT’S IN THAT ROOM pairs Igwe’s moving image work with parafictional and archival materials that lend contextual specificity to the locations and subjects of the work. These supplements include works on paper that imagine the programmatic elements in the architecture of the Bristol museum, a timeline that situates key events, and a selection of broadcasts from Commonwealth FM—a public radio station operating in the UK between 2003–06 featuring programs made by local residents from across the Commonwealth of Nations.

Igwe’s specific historical references extend into the Canadian context through the uncanny likeness of the colonial impression cemented in the structures and practices of Canadian memory institutions. At Mercer Union, the artist’s work joins a thematic connection between a series of forthcoming exhibitions by artists pursuing an investigation of records—incidental or official, living or untraceable—that evidence through imaginative invocations, a considered reflection on the present.