“I am delighted to be working with such high calibre designers to celebrate Gabriel Scott’s 10th anniversary. The designs they have proposed are original and a real testament to the spirit of the Welles chandelier, which is now five years old. The project title ‘Floating Ideas’ came to mind because, when you float an idea, you want to see what it inspires in others – and how far it can be taken. I think this will be a really special Milan Design Week for us and we look forward to sharing the show with everyone,” says Richler.

The Welles Chandelier showcases a series of hollowed polygons branching out into a modular system of interconnected configurations creating an optical illusion. The Welles floats in the air emitting a cloud of soft light through its multifaceted, sculpturally innovative silhouette.

For the anniversary, the six top international designers have revisited the Welles Chandelier and added their own interpretations to its design. Each piece is in keeping with Gabriel Scott’s core design principles: versatile aesthetic, customizable and timeless.

To ensure differentiation between each studio’s design, Gabriel Scott provided a specific brief which offered advice on design direction as well as technical execution to ensure that each piece is a workable and buildable product.

New York designer Michelle Gerson’s take on the Welles design draws elements of nature, bringing in a floral detail to represent growth and bloom, alluding to the rebirth of a classic Gabriel Scott design. The softer, organic lines juxtapose with the harder geometric shape of the Welles. Brass and white sandblasted glass. 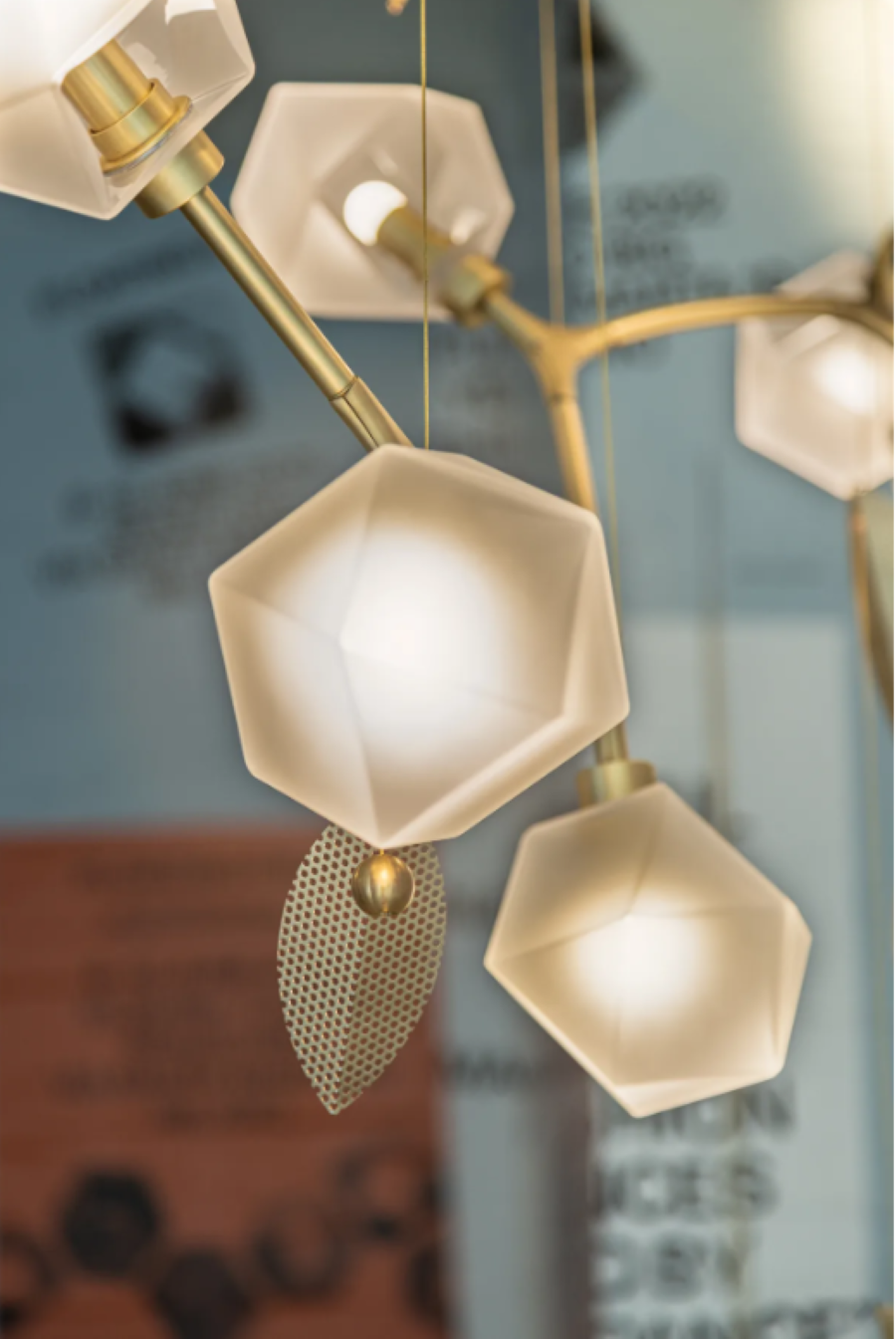 As a contrast to the original Welles sharp metal and glass silhouette, Parisienne interior designer Sybille de Margerie has created a new interpretation revealing the feminine side of her signature design style. Her piece shows a gradient composition from emptiness to fullness, with a variation of hollow and plain shapes. Sybille has used padded animal free fabric by Ultrafabrics to create a subtle 3D effect and has introduced softness with rounded corners. Brass and animal free fabric by Ultrafabrics. 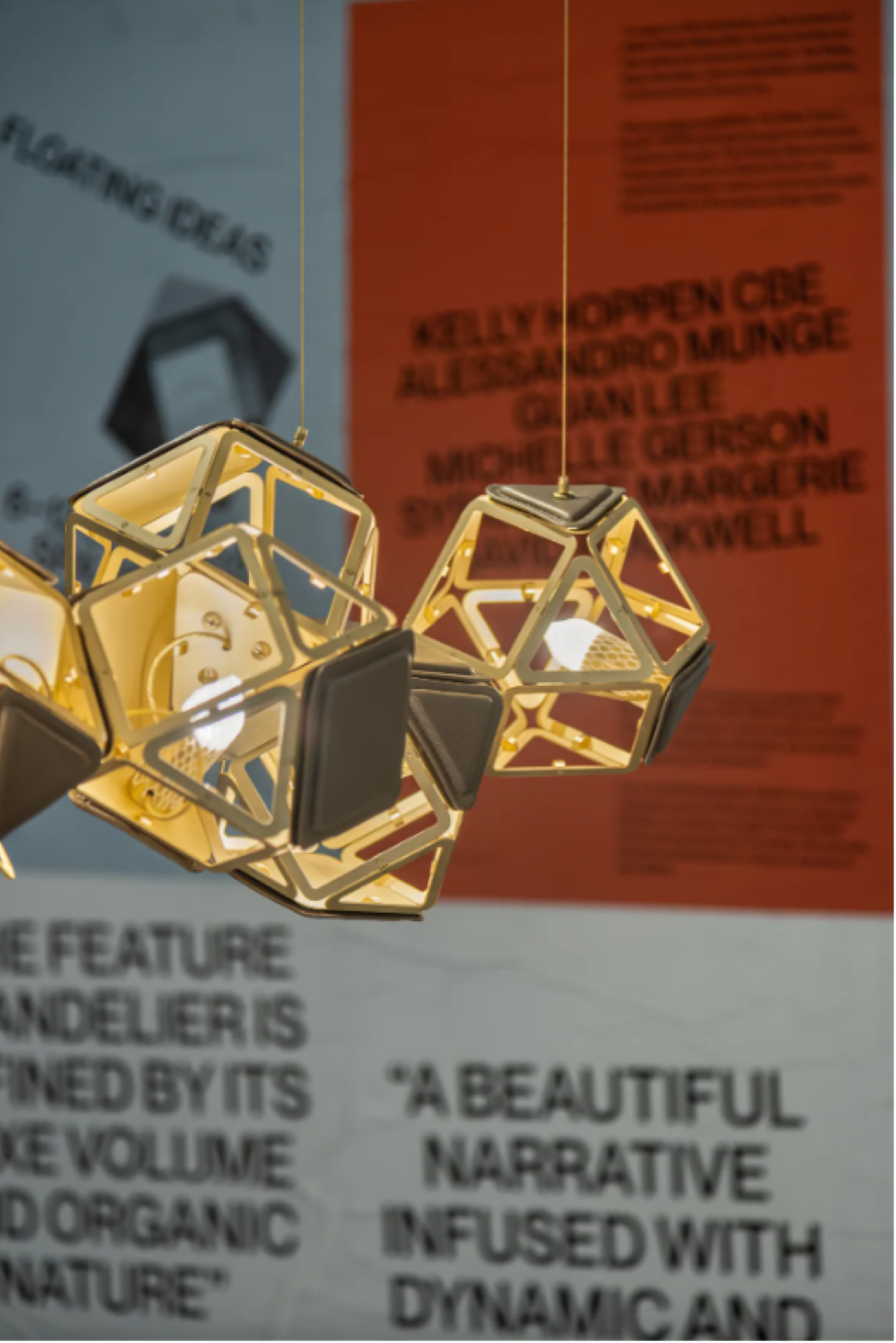 Guan Lee, director of Grymsdyke Farm in Buckinghamshire, UK, design is a striking floor installation, illuminated by light bulbs, and is made from Pollirock a new material developed by Material Architecture Lab. It’s fired clay with unique characteristics, somewhere between ceramic and rocks. It appears natural and yet it is made by recycling manufacturing waste. Lightweight and porous, it has varied possibilities in application from everyday objects like vases and chairs to architectural components like brick or tiles. It is a material that can be left outside to interact with nature. 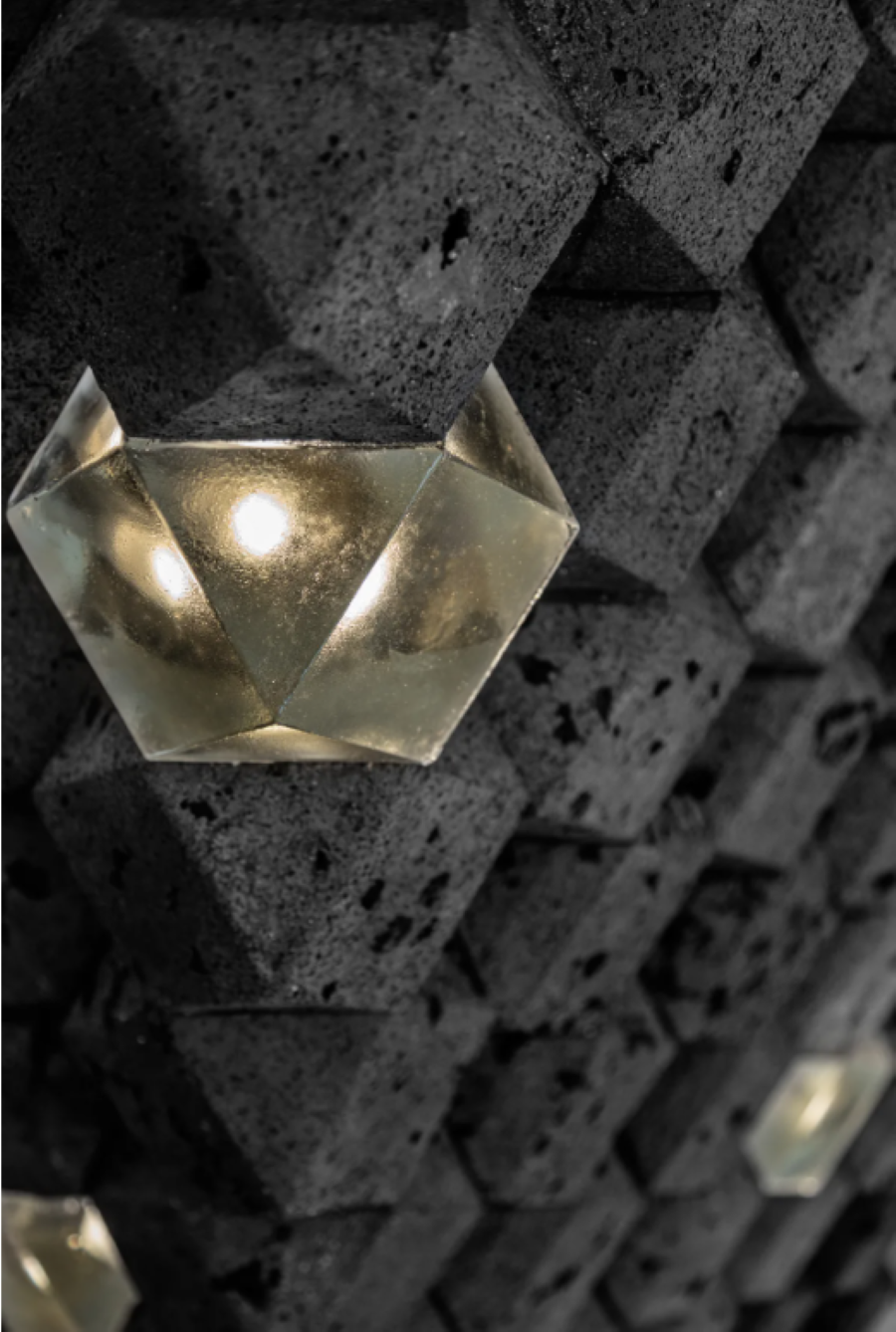 Crafted from white clay and complemented by cast bronze, London-based, multi-award-winning designer Kelly Hoppen’s reinterpretation is inspired by a collection of ceramics she is currently designing. Kelly has focused on the materials and scaled the size down to create an elegant overall appearance. It is wonderfully delicate yet maintains the same sense of movement as the original Welles fixture. Bronze and white porcelain. ​ 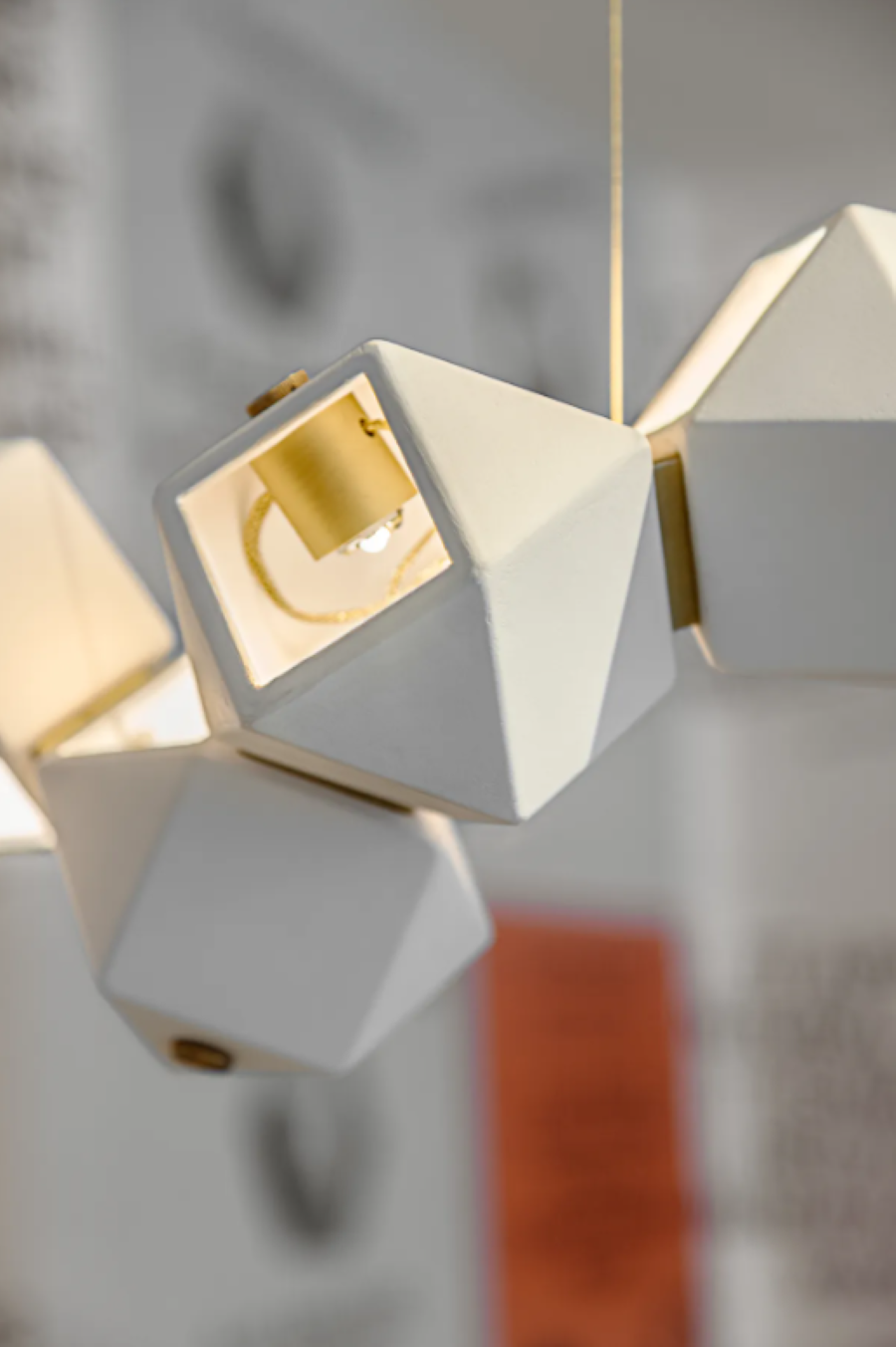 Studio Munge has developed a beautiful narrative infused with dynamic and bold fashion references inspired by rhythmic dance. The original Welles was deconstructed and rebuilt using a new support system inspired by the imagery, thus creating a significant visual divergence and a re-energized dialogue between the interconnected elements. The beautiful jewel-like connecting bracket has also been highlighted, making it a hero on the front of the glass. While the fixture’s volume is radically different, the modular qualities remain with an ability to extend stems for extra tall ceilings and multiply the globes for larger spaces. 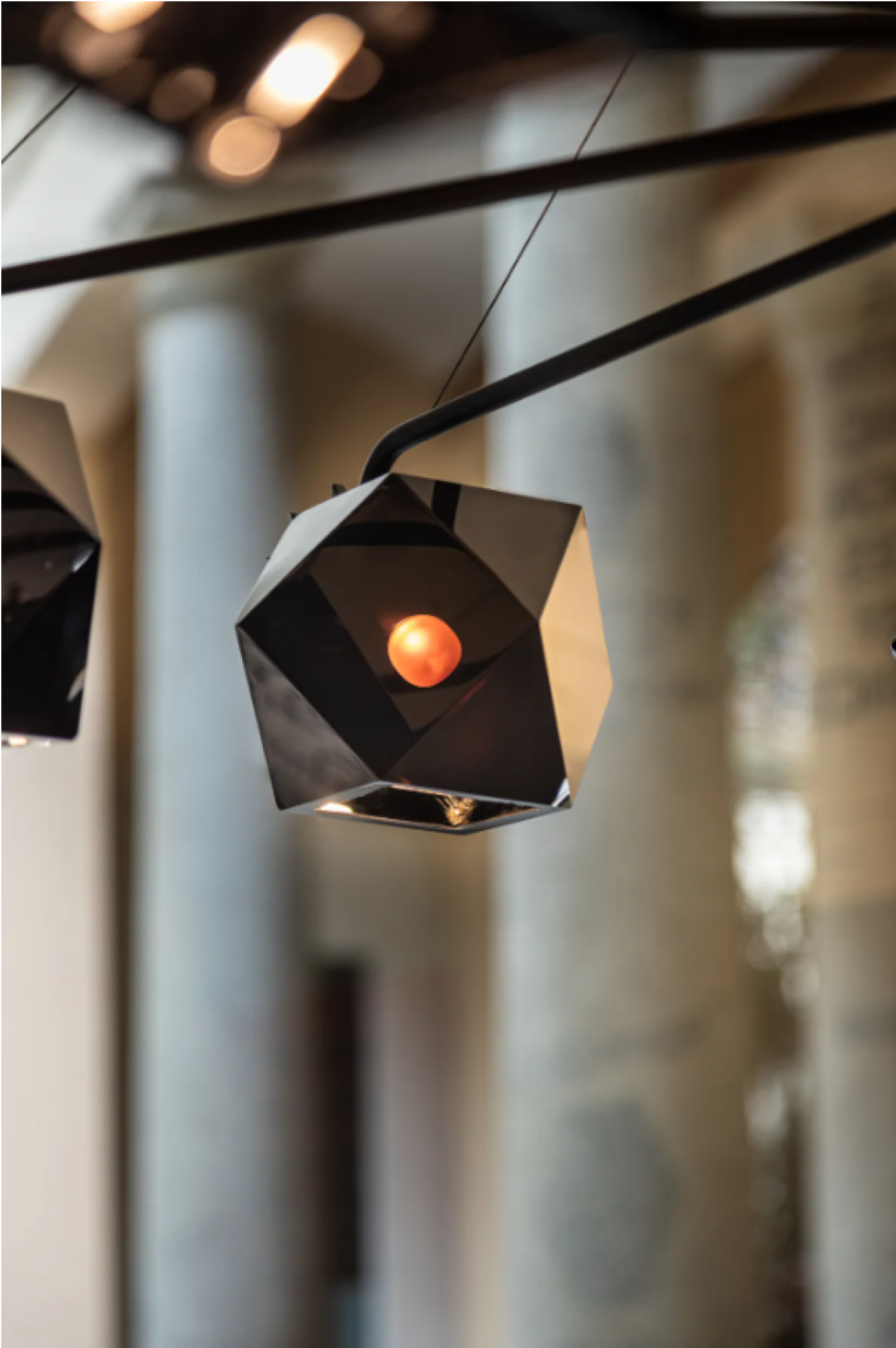 The hollowed glass polygons act as metallic light points that come together at varying heights and dimensions to form a celestial, floating light cluster. The feature chandelier is defined by its luxe volume and organic nature. 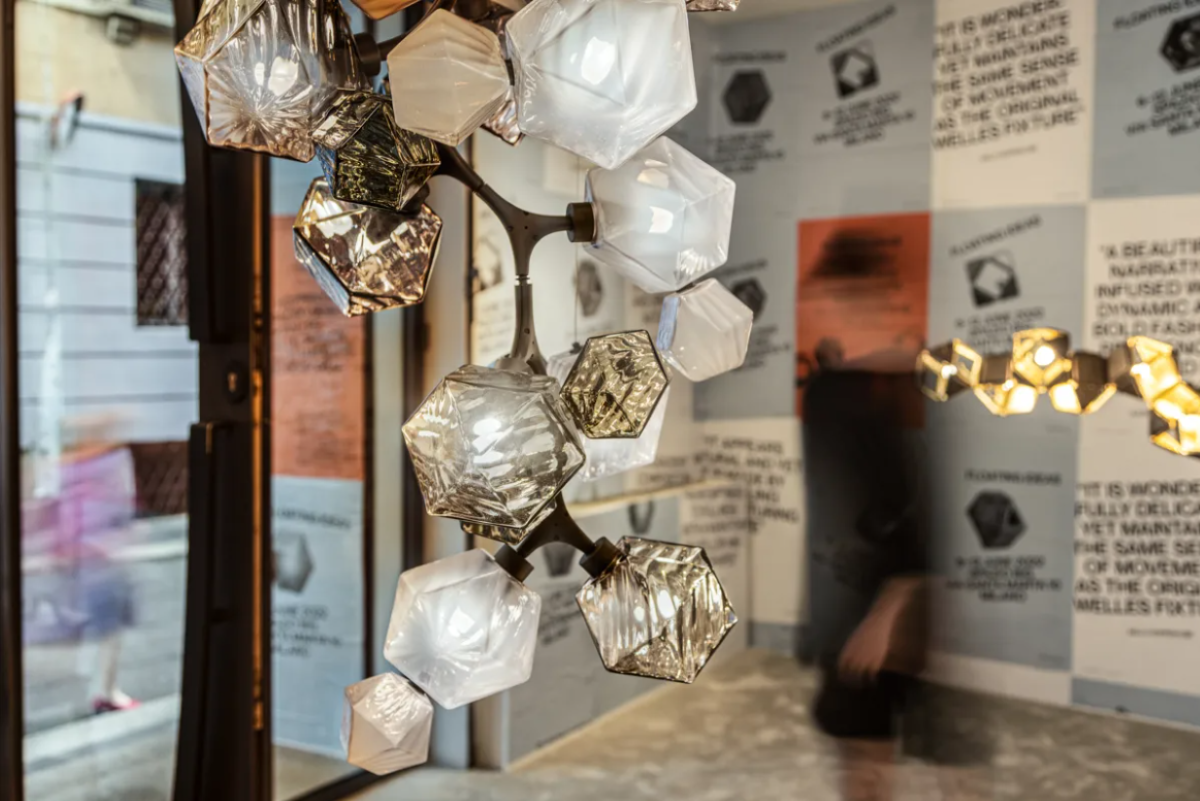