More than 262,000 people visited Salone del Mobile's first full-scale event since 2019. And that was just to the fairground. The city of Milan was buzzing with a familiar energy all were clearly happy to be part of again.

Neatly summed up by the name, the construction of this table lamp collection “was born by putting in relation three simple elements: cable, bar and cylinder,” says designer Guglielmo Poletti. Without the need for screws, glues or welds, “the core of the project lies in the tensioning system, which outlines both the formal and functional qualities of the lamp, entwining them in a mutual bond.” 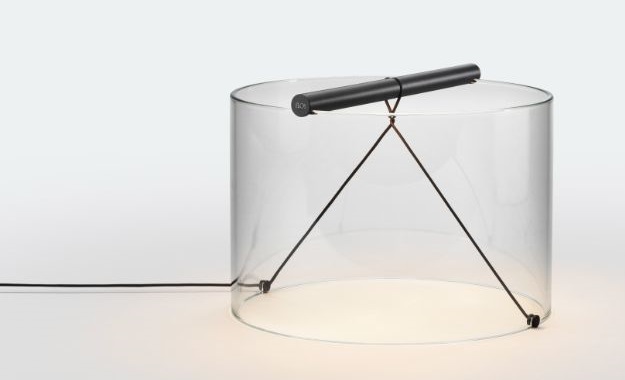 This new series of glass handles designed by Matteo Thun and Antonio Rodriguez in collaboration with Venini go delightfully against type for a company typically known for an industrial aesthetic of metallic angles and textures. Here, Murano glass is used to pleasing effect in two handle families: filigree and two-tone (shown), the latter a cylindrical shape in colour combinations of aquamarine/green, amethyst/amber and red/amber. 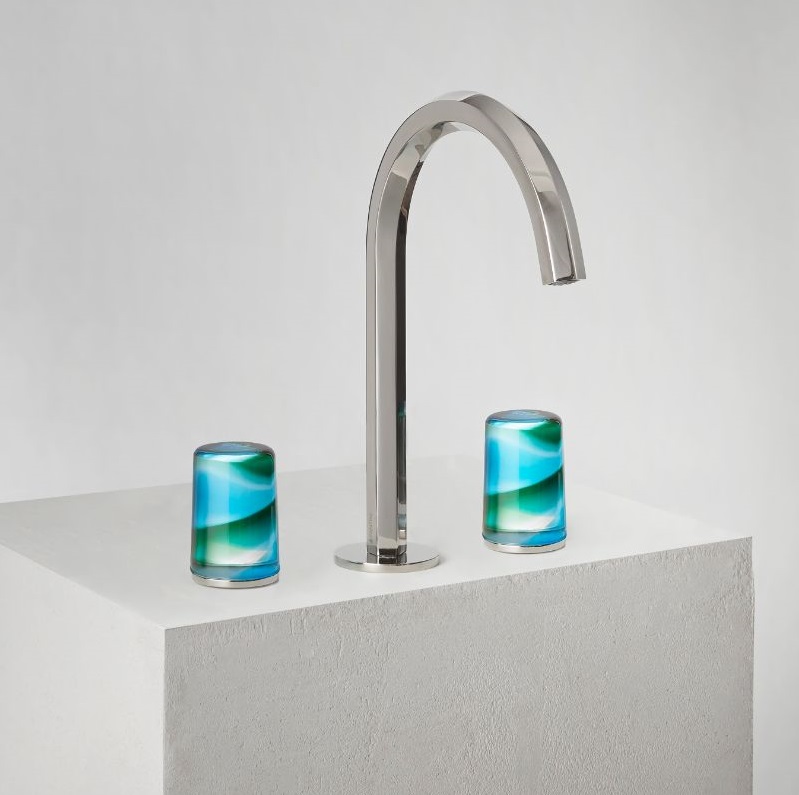 Using 1kg/m2 of reprocessed leftover wool accumulated by the company’s suppliers, this new collection is made using the hand-loomed dhurrie technique, resulting in rugs with a flat structure formed from a 50/50 split between warp (made of New Zealand virgin wool dyed black/white, yellow/blue, green/tile), and weft from marbled recycled yarn of varying thickness and colour. 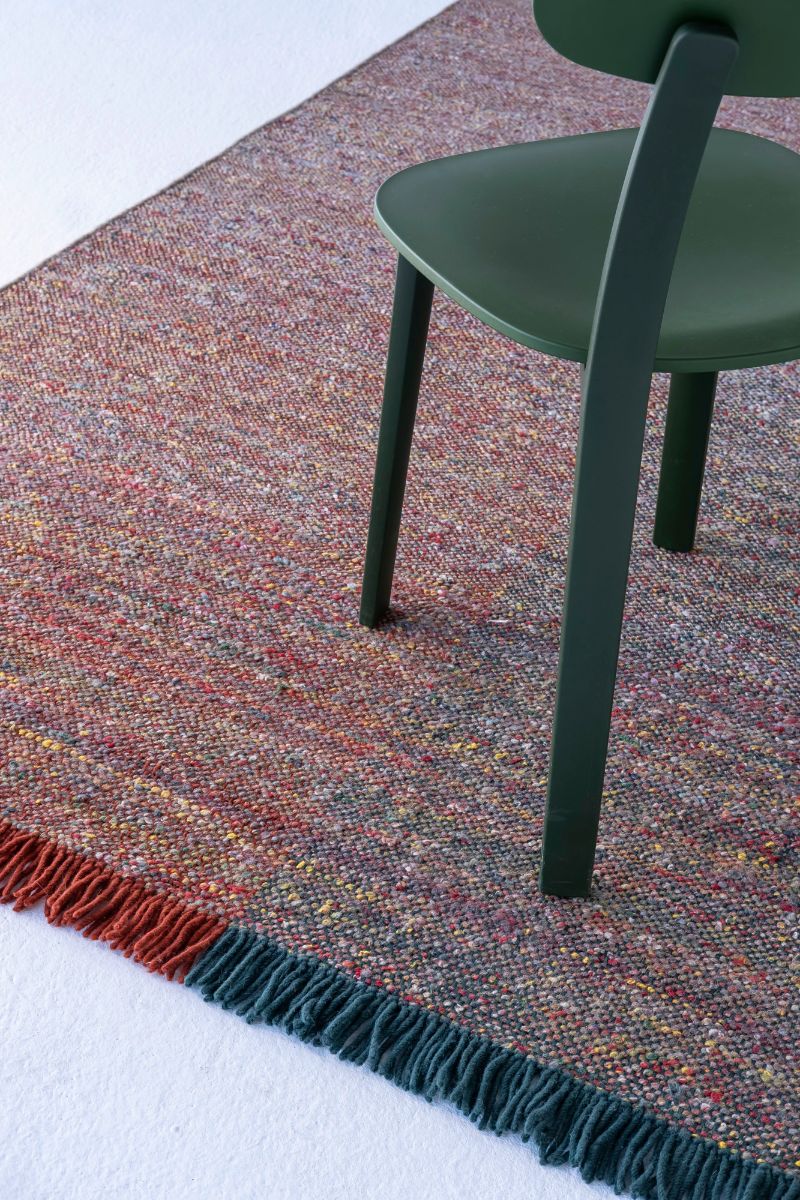 This Chicago-based studio had arguably the most interesting space within a campus of interesting spaces: a concrete-enveloped attic on top of a former psychiatric hospital building called Alcova in the Inganni district on the edge of Milan. With multiple products on display, this standing lamp stood out for the sculptural delicacy of two heavy asymmetrical halves leaning into one another. 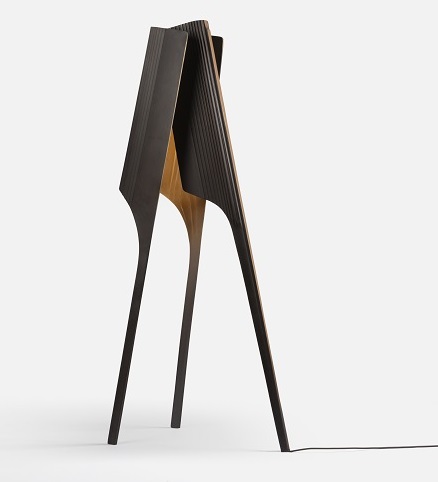 This new glass cabinet designed by Giuseppe Bavuso is eye-catching for the lightness and transparency of a precious glass box, whose internal accessories including glass shelves and wooden drawer units are reduced to a minimum in order enhance the objects on display with an integrated LED lighting system. 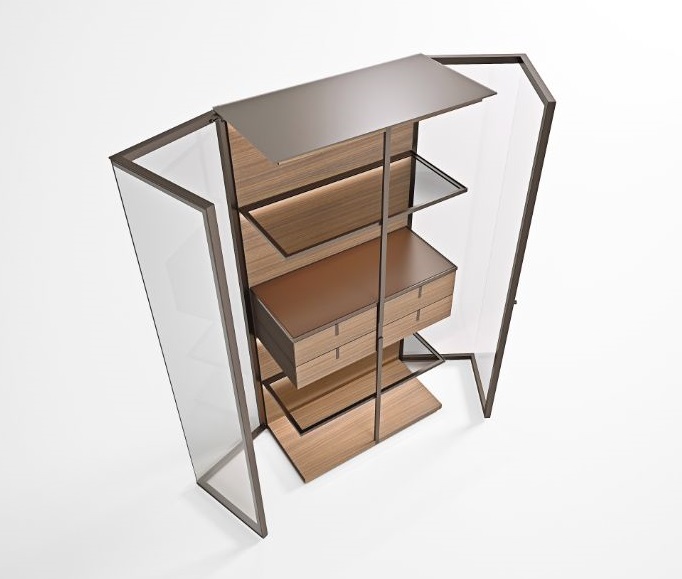 Practical? Maybe. Statement-making? Absolutely. A new geometric bathtub and washbasin concept by Jean Nouvel Design marks the first collaboration between the Italian and French entities and pays tribute to Jacques-Louis David’s painting The Death of Marat, at least according to the starchitect. What is most interesting is how a system of invisible joints makes the surfaces appear to simply approach one another side by side, showcasing the beauty of natural marble through the language of two-dimensionality. 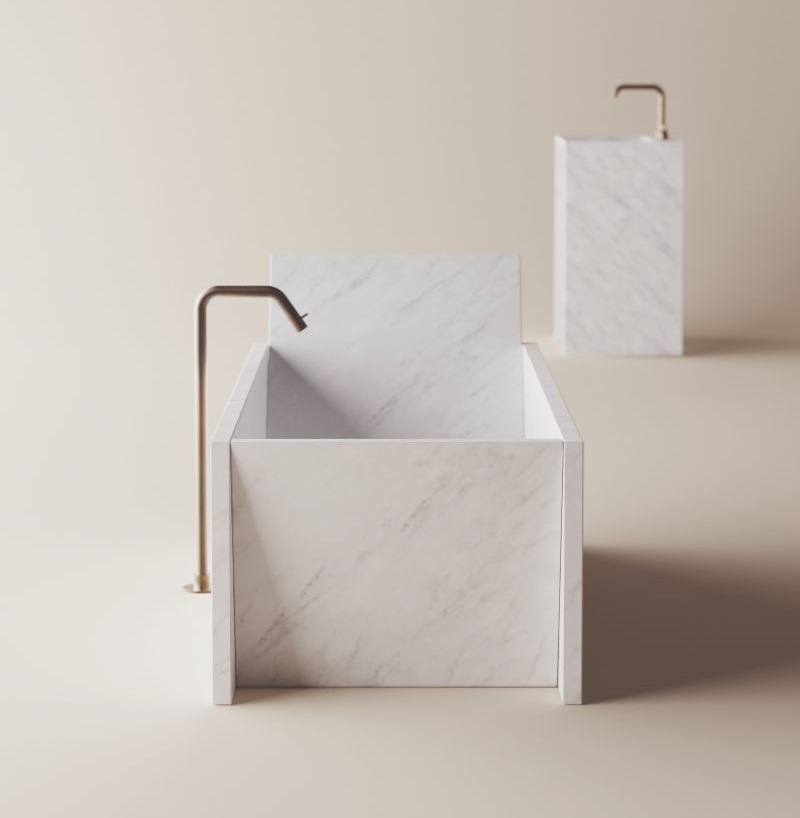 Picking one object from the whimsical Dutch brand’s new offerings is like picking one flavour from Baskin Robbins. Impossible, but you know you’re going to love it. Here, the user benefits from Andrés Reisinger and Júlia Esqué envisioning what sitting on 30,000 freshly bloomed petals would be like. What began as a rendering that went viral on social media is now available in two limited edition colours of pink and grey. 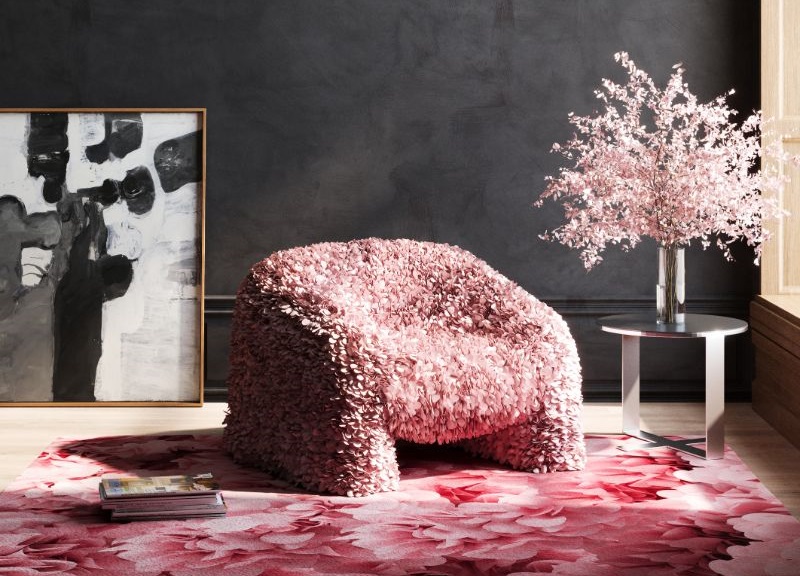 The German brand known for making hand-knotted rugs in Nepal has a new collection that draws inspiration from the Northern Lights and “their capacity to ensnare the light and dilute it into the colours of the spectrum, to create an effect resembling a water colour paint as it spreads on paper,” says maker. 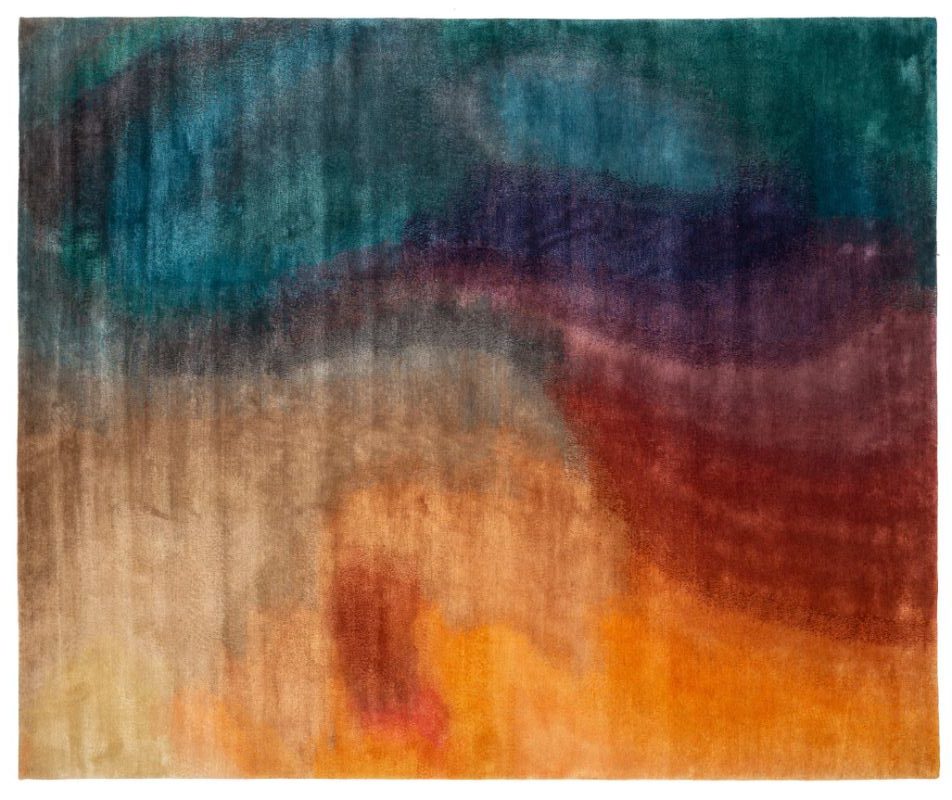 This furniture behemoth was everywhere in Milan, and while I generally despise booths with tighter security than Fort Knox, I can’t help but admit a certain fondness for this armchair. Inspired by the world of fashion, Philippe Starck used Missoni’s trademark zig-zag jacquard effect, creating a high-impact geometric design. Plus, the fabric weave means that it can be reversed, checking both aesthetic and sustainable boxes. 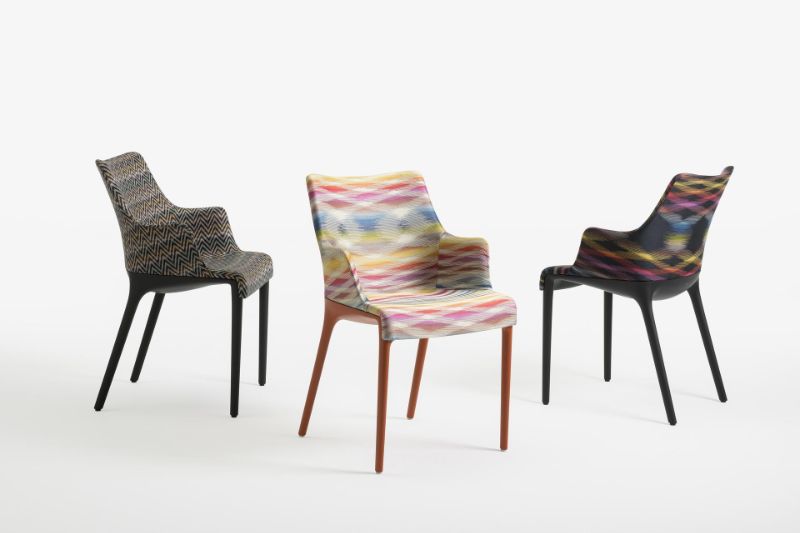 In celebration of the company’s 110th anniversary, Argentine-Spanish mark-making artist Felipe Pantone reimagined the brand’s iconic chair with a mesmerizing, digitized gradient of colours in their new Impact Less leather, bringing together an “analog past and digitized future” says the artist. 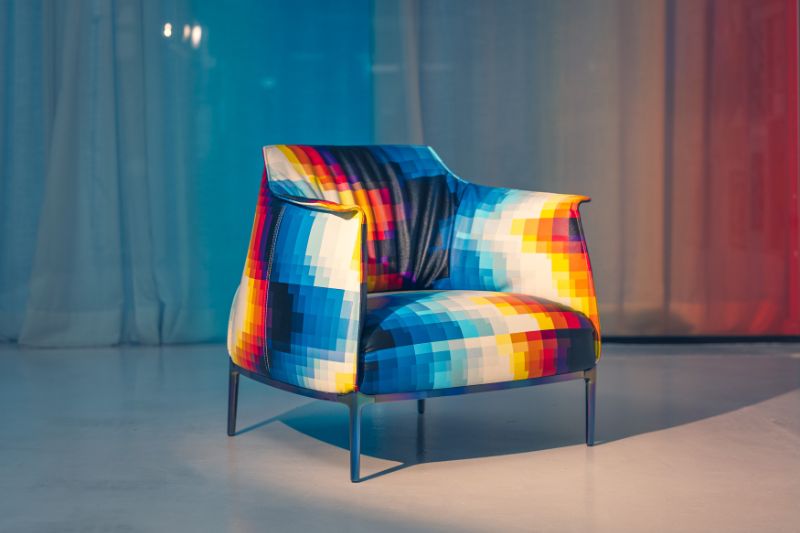 Big business happens in the pavilions of Salone del Mobile.Milano, but it is small forward-facing design gestures that are the most encouraging, and such gestures were in abundance in the SaloneSatellite exhibit, showcasing the work of some 600 promising design talents all under 35.

Naturally there was an awards program, with three prizes and two Special Mentions being handed out for “the message they embody, focusing not just on the formal incisiveness of their design but also their sustainable, communicative, interactive and ludic element, essential for the lives of adults and children now and, hopefully, also in the future.” Top place went to Lani Adeoye of Nigeria for the RemX walker, which “exudes a sense of dignity, helping to empower the user.” 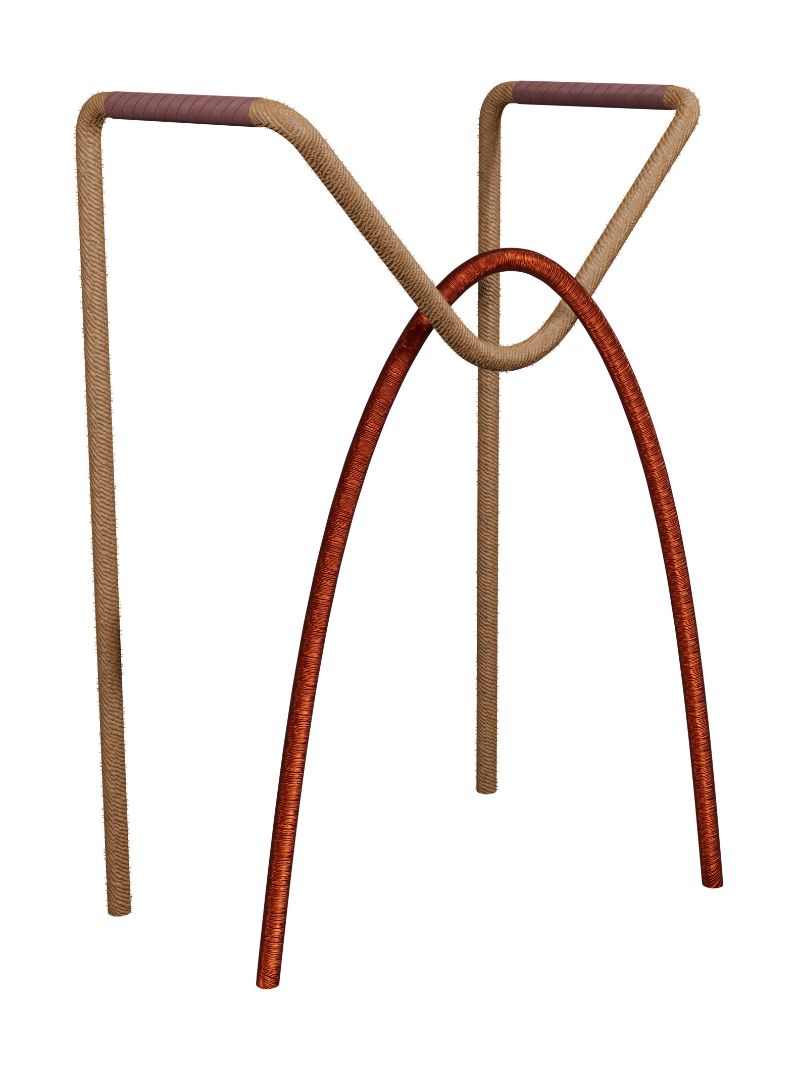 Print does not do this installation justice. Seen at the offsite event Tortona Rocks during Milan Design Week, Czech firm Preciosa Lighting cleverly combined light, crystal, and music in a large-scale exhibition. Two sections – an outer ring reminiscent of sound waves and an inner “heart” – were arranged to encourage visitors to move inwards and then play the inner sections by tapping the crystal rods, whereupon the contact was translated into both light and sounds which then traveled though the outer rings. 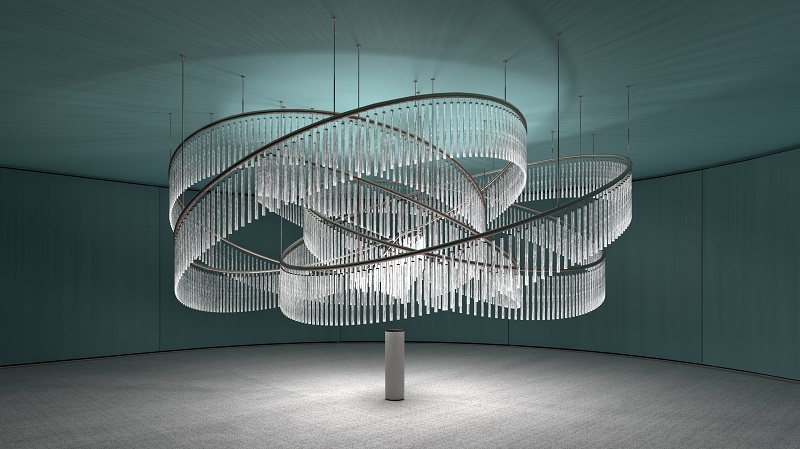 Dining on the Edge: Table Rock