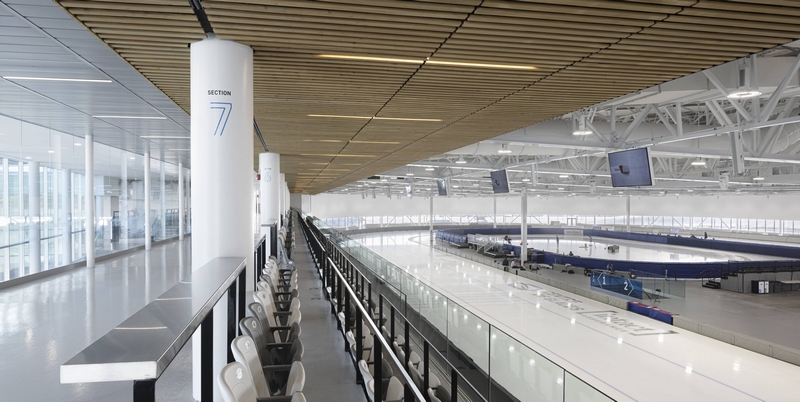 Every piece of design in this building is intended to amplify the glory of speed, from its fluid oval shape to its branding and wayfinding strategy. A first for the province and the largest of its kind in North America, the Centre contains a 400-m. indoor ice ring, two Olympic-sized rinks for various ice sports, as well as a three-lane, 465-m. running track. The structure features a 360-degree band of windows, which not only flood the interior with natural light but also makes the sports complex appear as though it were floating above the ground. Inside and above the ring is a multimedia banner integrated in a way that conceals the building’s inner mechanics, and an abundant use of wood alongside steel cladding throughout not only creates better control of acoustics within what at times is a raucous environment, but also creates a sense of warmth in a space intentionally meant for cool temperatures. A clear yet discreet visual wayfinding language coherent for locals as well as international visitors is blended into the smooth lines of the interior.