Accessible Design can be Beautiful

When award-winning architect Henry Tsang was 18 years old, he had his heart set on becoming a medical doctor. To meet the requirement for volunteer hours on his med school application, he worked in the gerontology department of Montreal’s Hotel-Dieu Hospital. Tsang spent a lot of time pushing seniors in wheelchairs from their ward to the hospital garden, navigating narrow hallways and avoiding stairs.

He got to thinking about the design of hospitals. So much so that he switched his career focus from medicine to architecture at McGill University.

“I thought that if I were going to be a doctor, I would really hate to work in this hospital environment,” said Dr. Tsang who went on to earn his Ph.D. in healthcare architecture from the University of Tokyo in Japan. “Accessible design is obviously very important in this setting because you have people in wheelchairs and stretchers – all sorts of people in hospitals who require extra help within the built environment to get them around.” 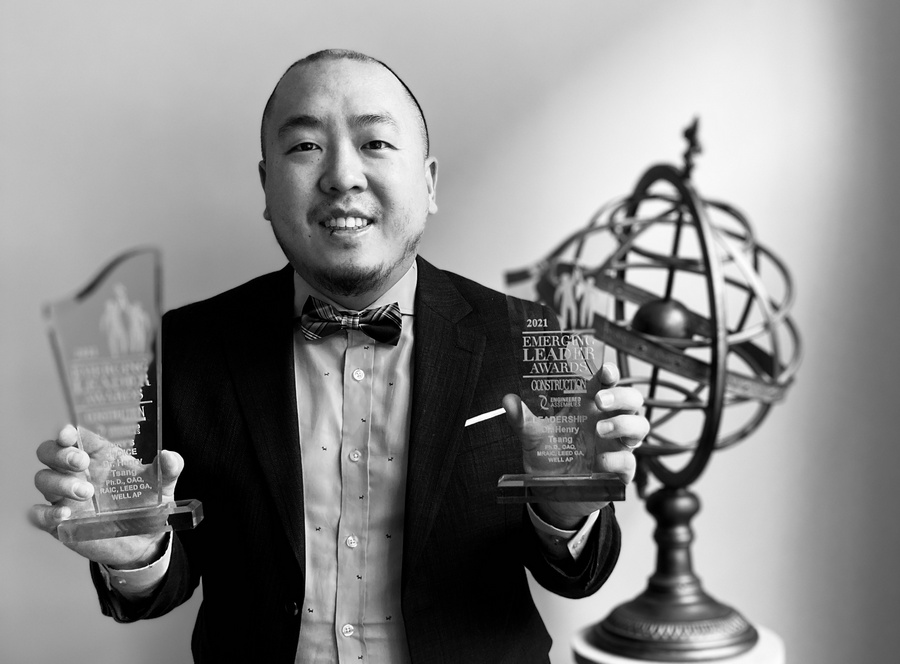 Dr. Tsang pursued the concept of flexibility in the built environment throughout his schooling. In his thesis, he explored how hospitals could be designed to adapt to changes in medical practices and new technologies. Studying in Japan also took on another dimension; he learned about seismic structures and innovation for natural disasters, in addition to designing for the world’s most aged population.

After graduating, Dr. Tsang worked for one of the largest architecture firms in the world, Nihon Sekkei, where he designed ten hospitals between 2006 and 2012. First up was the Outpatient Care Centre at the San Felipe Hospital in Tegucigalpa, Honduras. Dr. Tsang was tasked with designing a communal and accessible building while respecting the local Spanish colonial architectural heritage.

“I was most interested in learning how the built environment affects our health such as the healing process and how to make it easier for medical staff to do their jobs,” said Dr. Tsang. “Accessibility fits into the psychological aspect of environments; how to make spaces inclusive and more accessible to people of different shapes, sizes, and abilities.”

Dr. Tsang’s favourite hospital design from his early years is the University of Indonesia’s Health Science Campus in Depok. The hospital is earthquake-proof thanks to base isolation, a technique where the building sites on a rubber foundation. It also features environmental sustainability through passive solar design, green rooves and walls, rainwater and graywater harvesting, natural ventilation through spacious courtyards and wide hallways, which also facilitate better wayfinding and ease of movement.

In 2019, Dr. Tsang settled in Calgary, AB, where he is an assistant professor in the RAIC Centre for Architecture at Athabasca University. Accessibility, or rather a lack thereof, again came into sharp focus – this time from the perspective of being a father.

Building for All Means Being Accessible and Welcoming

After becoming a parent, navigating the city with a baby stroller brought back memories of wheeling seniors from their hospital beds to the garden. Dr. Tsang wondered how he was supposed to go upstairs with a stroller when there was no ramp present and how to open a door and keep it open so it wouldn’t bang into the stroller. Too many times to count, he also wondered how to find universal bathrooms and diaper-changing tables.

It became clear to Dr. Tsang that he needed to better understand the relationship between accessibility and the built environment, so he enrolled in the Rick Hansen Foundation Accessibility Certification™ (RHFAC) Training course offered through PowerED™ by Athabasca.

“I thought I already had a good grasp of what was needed to design an accessible building for wheelchairs – requirements such as room dimensions, door widths, counter heights, ramp slopes, and handrails from my 15 years in practice,” said Dr. Tsang. “But I had only scratched the surface.” 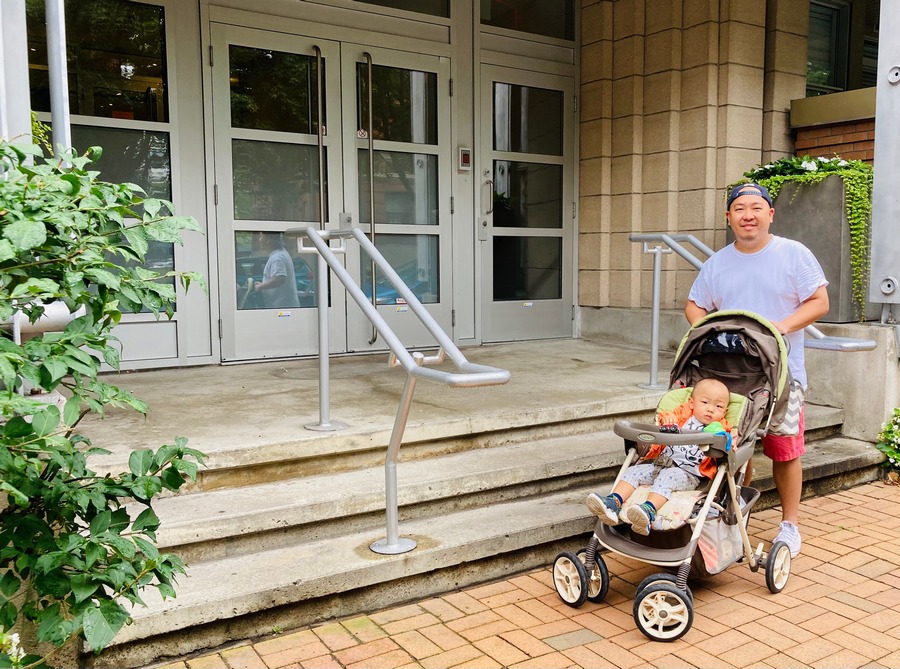 Meaningful accessibility is based on the Universal Design ethos of buildings being used to the greatest extent possible without needing adaptation or specialized design. Think invisible hearing loops instead of headsets for those with hearing aids; use of specific colours to assist those with low vision; and beautiful wide ramps that everyone can use instead of stairs.

Accessibility is not formally taught at most architecture schools as it is considered to be covered by building codes. But codes only cover the bare minimum and by themselves aren’t enough to ensure meaningfully accessible spaces for the 1 in 5 Canadians who have a disability.

“Through RHFAC, I was pleasantly surprised to learn as much as I did. Perhaps the better word is ‘unlearn.’ I had to unlearn what I thought I knew and view accessibility from a different perspective,” said Dr. Tsang. “I think many architects think that accessibility is just for people with disabilities, viewed as a cure to a disease. But the RHFAC course showed me that accessibility is really about making buildings accessible, welcoming, and inclusive to everyone. And that is a game-changer.”

RHFAC is a rating and recognition program that provides an overview of the level of meaningful accessibility of a building or a site. It was designed in consultation with people with mobility, vision, and hearing disabilities. RHFAC provides a holistic and consistent approach to measuring access through a rating survey conducted by an RHFAC Professional. It provides building owners and managers a better understanding of their current level of accessibility, a roadmap of where to improve, and sets an aspirational goal.

Consistency is key, especially now as the Accessible Canada Act legislates the accessibility of all federally-regulated buildings. Manitoba, Ontario, Nova Scotia, and British Columbia have also introduced their own accessibility legislation, with others planning to follow suit. 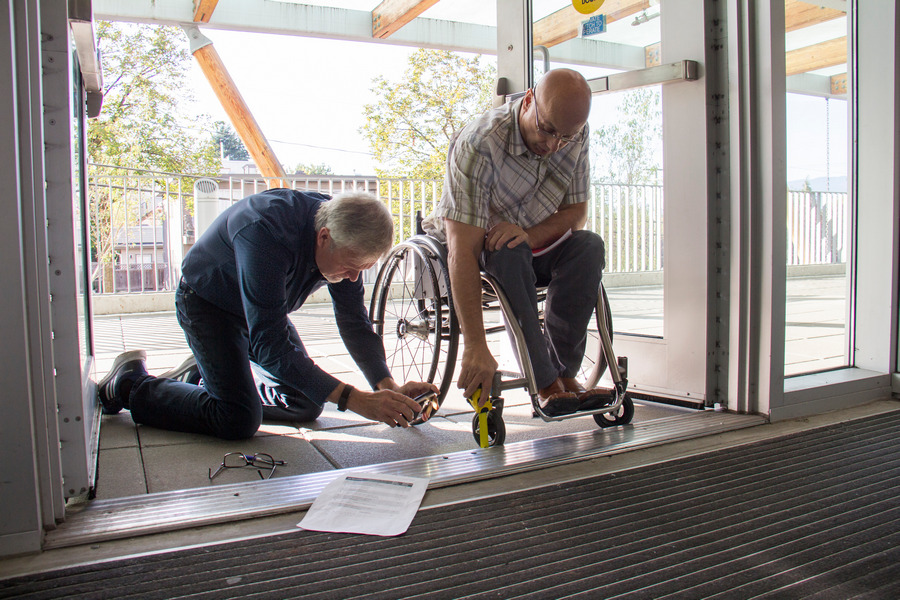 After taking RHFAC Training, Dr. Tsang embraced accessible design. In 2020, his design plans for the Calgary Japanese Community Centre won the Canadian Architect Award of Excellence for being green and inclusive. In 2021, he was awarded two Construction Canada Emerging Leader Awards for his work designing for underserved communities. In addition to teaching, he founded his practice Henry Tsang Architect in January 2022.

“At some point in your life, you’ll need extra help. It could be due to disability, or it could be due to injury or aging,” he said. “When I had children and had to go around town with a stroller, even the smallest differences in elevation like a slight five-centimetre level in front of a door became a huge obstacle. Most of us don’t realize the difficulty until we have to do it ourselves.”

It’s just a matter of time before accessibility catches on as an organic part of the design process, Tsang said.

“It feels like this is where we were 20 years ago with sustainability and green buildings. There was some resistance and green solutions were afterthoughts to the original design. For example, people were saying adding solar panels would ruin the look of the roof. But now, we’re able to naturally integrate sustainability into our designs. This is where I see accessibility heading,” said Dr. Tsang.

“Accessibility is about the design of the experience, the flow and feeling of a space,” he added. “The RHFAC is doing something unique in the sense I haven’t seen anything like it in any part of the world. It’s an educational platform plus a certification. It’s not a checklist; it’s about understanding the building from the user’s perspective.

“It’s really about designing buildings that are inclusive and welcoming to all.”