The Stop Community Food Centre is once again looking for designers to create unique food carts for the fifth annual The Stop’s Night Market, being held this June in Toronto. The selected carts will be used as vending stations for some of the city’s best restaurants and local wineries. This popular event brings together creatives from Toronto’s culinary, design, performance, and graphic arts sectors, celebrating diversity, community, and the power of food.

Designers create one-of-a-kind carts for the event, inspired by night markets from around the world. Designers are asked to take their inspiration from The Stop’s mission to increase access to healthy food in a manner that maintains dignity, builds health and community, and challenges inequality. An emphasis on sustainable and reclaimed materials is essential, and designers are encouraged to imagine the ways in which their carts can be repurposed after the event. Several Night Market designers have successfully sold their carts, featured them in other design shows, or re-used elements to create entirely new structures.

Interested designers are asked to download the 2016 Design Manual from http://thestop.org/nmdesign2016 and submit proposals, based on the provided guidelines, no later than Sunday, March 13th at midnight.

The Stop’s Night Market is a captivating mash-up of the best of Toronto’s food, drink, and art, and offers Torontonians a tantalizing feast for the senses. Held for the first time in 2012, Toronto Life named The Stop’s Night Market as Reason No. 5 in their “Reasons to Love Toronto” 2013 edition. Last year, the sold-out event raised a record $235,000 for The Stop’s critical food access and community-building programs.

From its origins as one of Canada’s first food banks, The Stop has blossomed into a thriving community hub where neighbours participate in a broad range of programs that provide healthy food, foster social connections, build food skills, and promote civic engagement. Underlying all of The Stop’s efforts is the belief that food is a basic human right. 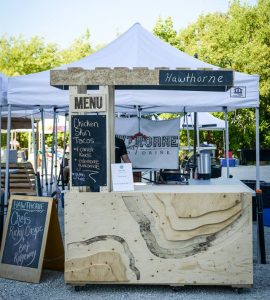