The growing F-waste issue and how to handle it.

Over 10 million tons of “F-waste,” or furniture waste, ends up in landfills annually in Canada and the United States, representing an exorbitant amount of environmentally harmful trash that people might not realize is even there. A functioning office cubicle represents anywhere between 300 to 700 pounds of waste, the majority of that is in the form of ferrous metal, wood, and plastic. The typical office task chair contains dozens of different materials and chemicals by itself.

Given the confluence of recent events, the F-waste stream, which was ubiquitous before the pandemic, has grown substantially. The time away from the traditional in-office routine has led many companies to reevaluate their situation, leading to an increase in office relocations, consolidations, virtualization, de-densification and downsizing.

There is no telling what the future of the office will be, but a recalibration of office culture has certainly taken place in response to COVID-19. For example, in 2019 downtown Toronto’s office vacancy rate was the lowest in North America at 2.6 per cent, but then the amount of office sublease space on the market quadrupled during 2020 to almost 2.5 million square feet. The city government in Toronto plans to substantially cut its office locations and extend more flexible working arrangements to its employees, cutting its properties from 55 to 15, further illustrating the trend that office space isn’t in high demand at the moment.

In Manhattan, the North American city with the most office space, it is estimated that sublease space grew to 16.1 million square feet by the end of the third quarter of 2020, up 46.8 per cent from Q1. The San Francisco Bay Area has been affected even more drastically, with sublease space increasing by 148 per cent through September 2020, and as a result Silicon Valley is getting a makeover during this office space exodus. Giant companies such as Oracle, Tesla, and Palantir are moving out of state in large numbers for a multitude of reasons. The culture of most, if not all, big tech workforces is a “leave no trace” mentality. However, anyone who has moved knows that you can’t bring everything with you, and when you have the funds of a Silicon Valley unicorn, it’s a safe bet that you’re not bringing that gently used office furniture across country.

Office closures and consolidations like this should be expected to continue, and 2021 is the first year we are seeing this accelerated trend take hold. Now is the time for these organizations to devise a plan on what to do with that F-waste. While there’s no one-size-fits-all solution, a holistic approach that considers the bottom line, environment, and community where employees live and work is a great place to start.

A typical office decommission has movers junk your office assets. It is unimaginative, lazy, and there is not much to it. However easy that may be, there is something being left on the proverbial table – financially and ethically – by tossing everything away. In response to this, companies striving to do better for themselves and the world around them are increasingly pursuing sustainable office decommissions, focusing on the recycling, resale, and reuse of office assets.

Based on the principles of the circular economy, a decommission begins by evaluating each asset and identifying its proper place in the system. The highest value furniture is resold, bringing direct value back to the company and continuing the lifecycle of that furniture and equipment. This provides an attractive, environmentally friendly alternative to a trip to the landfill, especially when considering the tipping fees that approach would incur.

Reuse, or donation, accounts for a major portion of a decommission. This sees lightly used furniture that is still useful donated to a non-profit in need of an upgrade. Not only does this directly help a local organization that needs the support, but it is also a boon to a company’s CSR efforts. Helping a deserving organization upgrade their built environment at no cost is the most rewarding part of the process, and provides a huge impact on both the environment and the community.

The final piece of the puzzle is recycling. While donations are important as far as impact on the communities they have, and reselling goes a long way in offsetting other costs, recycling is just as important for its positive impact on the environmental footprint of the project. This category represents the items that aren’t up to the quality of those destined for donation and resale and are often made up of treated wood and metal. Specialized recycling can generate returns on investment, process a variety of items, and reintroduce materials back into the manufacturing process.

With more and more offices closing across the world, a sustainable office decommission like this allows businesses to improve their triple bottom line, and responsibly allocate their no-longer needed office assets in a way that will help their revenue, the environment, and their local communities. 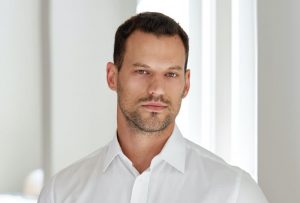 Richard Beaumont is co-founder of Green Standards, a Toronto-based firm committed to helping organizations reduce waste and benefit communities across North America. An advocate for Cradle-to-Cradle design and the circular economy, they have diverted 75,000 tons of office furniture, equipment, and supplies from landfills and donated over $32 million in surplus assets to over 5,500 non-profits.

DesignTO Festival moves forward with a Distanced and Digital Festival

Pantone introduces ‘Very Peri’ as the 2022 colour of the year